The awards, given annually in the life sciences, physics and mathematics, celebrate scientists and seek to generate excitement about the pursuit of science as a career. They are sponsored by Google co-founder Sergey Brin and his wife, Anne Wojcicki, a founder of the genetics company 23andMe; Alibaba Group founder Jack Ma and his wife, Cathy Zhang; Russian entrepreneur and venture capitalist Yuri Milner and his wife, Julia; and Facebook founder Mark Zuckerberg and his wife, Priscilla Chan.

“By challenging conventional thinking and expanding knowledge over the long term, scientists can solve the biggest problems of our time,” Zuckerberg said. “The Breakthrough Prize honors achievements in science and math so we can encourage more pioneering research and celebrate scientists as the heroes they truly are.”

Each prize includes a trophy and $3 million to be shared among the laureates. The Silicon Valley gala was hosted by Family Guy creator Seth MacFarlane, and included actors Russell Crowe and Hilary Swank as presenters. Grammy Award winner Pharrell Williams performed.

Several of this year’s Breakthrough Prize winners will discuss their work tomorrow (Monday, Nov. 9) during a free all-day symposium at the Brower Center in Berkeley, beginning at 10:30 a.m. and live-streamed via YouTube. A public panel discussion with past winners will take place tomorrow evening, 5:30-7 p.m. at Zellerbach Playhouse. Two of last year’s winners of the prize, UC Berkeley’s Saul Perlmutter and Jennifer Doudna, will speak at both the symposium and the evening panel discussion.

This year’s math prize went to Agol, a professor of mathematics currently on sabbatical at the Institute for Advanced Study in Princeton, New Jersey. Agol studies the topology and geometry of three-dimensional spaces, such as our own universe, and has won acclaim for solving five major conjectures by one of the giants in the field, the late William Thurston, a UC Berkeley alum. Agol worked with Thurston 16 years ago, when Agol was a visiting assistant professor at UC Davis.

“The prize is a great honor,” Agol said. “The first five math laureates are very well known in the field, and just being considered in that category, for me, is an honor.”

Agol has sought to understand negatively curved three-dimensional spaces, called hyperbolic 3-manifolds, which are like some of the proposed models of our universe that curl back on themselves, so that if an astronomer looked far enough, she could see the back of her head. The universe now appears to be flat, not negatively curved.

Agol proved major theorems about the topology of negatively cured 3-D spaces, including Thurston’s Virtual Fibering Conjecture, showing that some of the more complex spaces could be understood using simpler methods.

“I tend to work very visually, or intuitively, which is something I learned from Thurston,” Agol said. “I use my visual cortex to create a shorthand for something that can be very complicated to write down in a precise mathematical way. I try to teach this intuition to my students, too, though eventually you have to convert those visual ideas into equations to show that your intuitions are right.”

As have all five past math laureates, Agol plans to give $100,000 of his prize winnings to support graduate students from developing countries through the Breakout Graduate Fellowships administered by the International Mathematical Union.

The 2016 Breakthrough Prize in Fundamental Physics will be shared by five experimental teams studying neutrino oscillation, including two physicists – Takaaki Kajita and Arthur McDonald – who won the 2015 Nobel Prize in Physics for discovering that neutrinos shift their identities as they travel at nearly the speed of light. 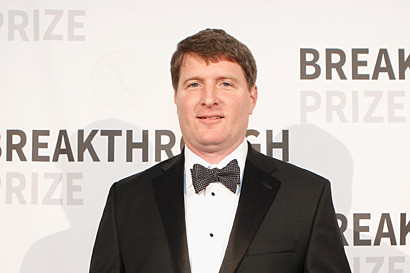 “This year is the year for neutrinos,” said Kam-Biu Luk, a UC Berkeley professor of physics and Berkeley Lab scientist who is the co-leader of one of the five teams, the Daya Bay Reactor Neutrino Experiment near Hong Kong. “When I first heard in August that Daya Bay had won, I was surprised, because we are still running the experiment and I didn’t expect that we would be recognized so early.”

The prize is actually being shared among more than 1,300 scientists: the Daya Bay team, led by Luk and Yifang Wang of China’s Institute of High Energy Physics; the Sudbury Neutrino Observatory experiment, which was started by McDonald in Canada, and three experimental groups in Japan: Super-Kamiokande, led by Kajita and Yoichiro Suzuki; KamLAND, led by Atsuto Suzuki; and K2K and its successor, T2K, led by Koichiro Nishikawa. Before his death in 2012, UC Berkeley and Berkeley Lab physicist Stuart Freedman was the U.S. spokesperson for the KamLAND experiment and headed the Berkeley team.

All these experiments are situated underground to detect the neutrinos or antineutrinos produced either from the Sun, accelerators or nuclear reactors often miles away.

Neutrinos were once thought to be massless particles that move through the universe at the speed of light, rarely interacting with the matter around them. These experiments, however, have shown that neutrinos actually have a small mass, and that the three types – the electron, muon and tau neutrinos –morph into one another as they travel through space.

Daya Bay discovered a third kind of neutrino oscillation, and has been making ever more precise measurements of one of three mixing angles that describe how the three types, or flavors, of neutrinos blend with one another, providing an explanation for their spooky transmogrification from one flavor to another.

The ongoing experiments are also trying to address the differences between the masses of the three neutrino flavors, and looking for a hint that neutrinos violate charge-parity (or CP) symmetry, which could explain the predominance of matter over antimatter in the universe. While Daya Bay will continue to operate through 2017, Luk and his UC Berkeley colleagues have joined a new collaboration, called DUNE, to use an intense neutrino beam produced by the accelerator at Fermilab near Chicago to determine definitively the heaviest and lightest of the three neutrinos, and to look for stronger evidence of CP violation.

Luk also plans to donate some of his prize winnings, which will amount to about $200,000, for student scholarships.

Five 2016 Breakthrough Prizes in Life Sciences were presented for work in human genetics, the genetics of disease, and new optogenetic techniques. The five laureates are Edward S. Boyden of MIT, Karl Deisseroth of Stanford University, John Hardy of University College London, Helen Hobbs of the University of Texas Southwestern Medical Center and Svante Pääbo of the Max Planck Institute. Pääbo, an evolutionary geneticist, was a postdoctoral fellow at UC Berkeley from 1987 to 1990.