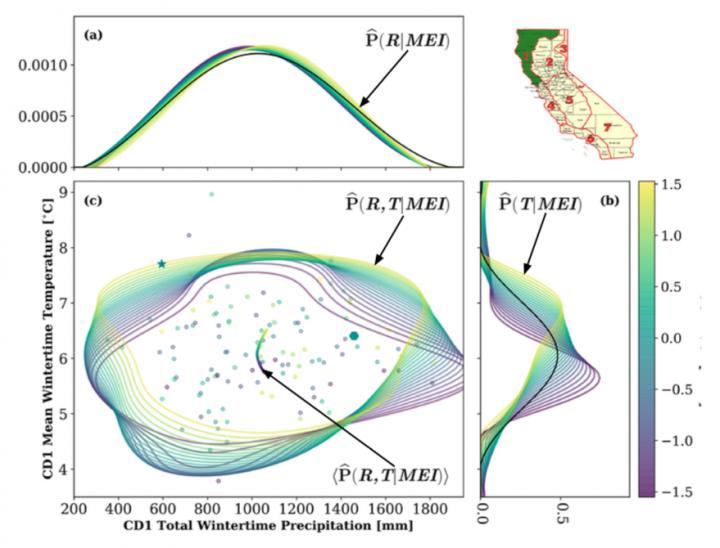 When there are multiple factors at play in a situation that is itself changing, such as an El Nino winter in a changing climate, how can scientists figure out what is causing what? Researchers at Lawrence Berkeley National Laboratory have developed an advanced statistical method for quantifying and visualizing changes in environmental systems and easily picking out the driving factor.

In a new study published in the journal Climate Dynamics, they used their new technique to look at California winters. “A lot of people will describe a winter by how rainy or how cold it was,” said lead author John P. O’Brien, a graduate student research assistant at Berkeley Lab. “Instead of asking each question individually, what we’re doing is interrogating both at the same time as a function of some large-scale climate forcing, such as El Nino.”

The new method allows researchers to account for variables whose statistics change over time – in this case, changes caused by El Nino/La Nina. They found that in northern California, La Nina and El Nino conditions result in nearly equivalent amounts of winter precipitation. However, La Nina winters tend to be much colder, resulting in conditions more favorable for increased mountain snowpack. So from a summer water supply perspective, contrary to common belief, La Nina winters may in fact be preferable to El Nino winters. The same, however, did not hold true for southern California.

Scientists have invented a new “synthetic antibody” that could make screening for diseases easier and less expensive than current go-to methods. Writing in the journal Nano Letters, a team led by Markita Landry of Berkeley Lab and UC Berkeley describes how peptoids – synthetically produced molecules, first created by Ron Zuckermann at Berkeley Lab’s Molecular Foundry, that are similar to protein-building peptides – and tiny cylinders of carbon atoms known as single-walled carbon nanotubes (SWNTs) can be combined to selectively bind a target protein.

The researchers demonstrated that their peptoid-SWNT assemblies remain stably bound to their target when tested in samples with a wide range of pH, salt concentrations, and temperatures; and when exposed to various protein-digesting enzymes – conditions no conventional antibodies could be expected to function in.

“This new platform encourages us to look to synthetic chemistry and nanomaterials science to create molecules that bind biological markers for diseases like cancer or viral infections,” said Landry. “The stability of purely synthetic recognition elements could facilitate easier disease diagnosis. They could also have safety applications by detecting hazardous chemicals in water or food.”

Planck’s Law, which describes electromagnetic radiation from heated bodies, forms the basis of quantum theory. However, with the advent of micro- and nanotechnology, it is easy to fabricate materials where Planck’s Law will not hold.

In a study published in Nature Communications, researchers at Berkeley Lab set out to explore how deviations from Planck’s Law could impact energy-related technologies based on nano- and micro-structured geometries.

“Nobody has explored the relative behavior of nano-geometries, particularly anisotropic nano-geometries–nanostructures that are rectangular in cross-section–in this way,” said Ravi Prasher, one of the authors.

Imagine a thermal storage material that converts electricity to heat and then radiates it to a photovoltaic cell to get the electricity back when desired. The radiative emitter from the thermal storage could be made from nanostructures to maximize the performance.

African-American moms are helicopter parents too, but endgame is survival

NIH’s All of Us Research Program to hold special symposium on May 6, 2019