Scientists who study capuchin monkeys on a nature reserve in Brazil found that stone tools are used for digging, seed pounding, and stone-on-stone percussion. The monkeys can serve as a model to help understand how humans evolved to use tools. 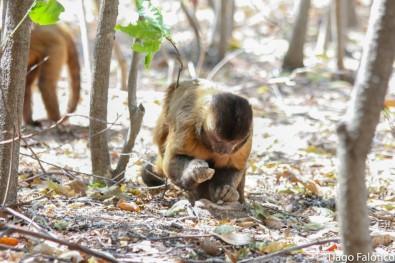 A group of researchers including Tiago Falótico, a Brazilian primatologist at the University of São Paulo’s School of Arts, Sciences and Humanities (EACH-USP), archeologists at Spain’s Catalan Institute of Human Paleoecology and Social Evolution (IPHES) and University College London in the UK, and an anthropologist at the Max Planck Institute for Evolutionary Anthropology in Germany, have published an article in the Journal of Archeological Science: Reports describing an analysis of stone tools used by bearded capuchin monkeys (Sapajus libidinosus) that inhabit Serra da Capivara National Park in Piauí State, Brazil. It is the first systematic study to characterize the tools used by capuchin monkeys living in the wild.

The animals use the tools for digging, seed pounding, nut cracking, and stone-on-stone percussion. The ultimate aim of the study was to find out whether these different activities created use-wear marks that pointed to the purpose for which the tools were used.

“Archeologists in the field analyze the tools found in a dig and the use-wear marks they bear,” Falótico said. “In our case, we had both the tools used by these monkeys and the chance to observe their behavior, to see how they used the tools. This is the first comparative analysis of the different tools used by wild capuchin monkeys for different purposes. We concluded that the tools displayed different patterns of use and wear in accordance with the activities involved and that these use-wear marks served to identify the activities performed by each type of tool and by the individuals that used the tools.”

The animals concerned inhabit the Caatinga, Brazil’s semi-arid shrubland and thorn forest biome. To crack open encapsulated seeds or fruits, such as locust fruit or jatoba (Hymenaea courbaril) and cashew nut (Anacardium occidentale), they pound them with a stone on another that serves as an anvil. They also use stones to dig or scrape the soil in search of tubers, roots, and spiders.

“They also hammerstones with other stones. The purpose of this stone-on-stone percussion, in the case of the groups we studied in Serra da Capivara, is to crush quartzite cobbles so that they can lick the powder and smear it on their bodies,” Falótico said. “We’ve only ever observed this behavior by the animals inhabiting the study site. We have a few theories to explain it, such as the use of quartz to combat parasites by eating the dust, or ectoparasites such as lice by rubbing themselves with it.
We have yet to test these hypotheses. The behavior isn’t seen all the time but it’s commonplace in the population concerned.”

The research is supported by São Paulo Research Foundation – FAPESP via a Young Investigator Grant for the project “Cultural variation in robust capuchin monkeys (Sapajus spp.)”.

The capuchin monkeys found in the Caatinga and the Cerrado, Brazil’s savanna biome, are more terrestrial than those in the Amazon or Atlantic Rainforest. “The latter don’t use stone tools. They’re arboreal and rarely seen on the ground. These tools are used on the ground,” Falótico said. As an evolutionary environment, he added, Serra da Capivara is very similar to that of the first hominins.

According to reputable sources, the term hominin is now defined as the group consisting of modern humans, extinct human species, and all our immediate ancestors (including members of the genera Homo, Australopithecus, Paranthropus, and Ardipithecus).

As these ancestors evolved, they too began spending more time on the ground and using stone tools. “Capuchin monkeys can serve as a model to help us understand which factors led to the use of tools by the first hominins,” Falótico explained.

Individuals may use the same tool in more than one activity, but this is unusual. “It also depends on the environment. In Serra da Capivara, there are lots of rocks and stones, so they can easily switch between tools,” he said. “In places with less stone available, they may use the same tool for different purposes. We have sightings of monkeys using a stone to dig and then pound a tuber they’ve found by digging.”

The capuchin monkeys of Serra da Capivara also use twigs, sticks, and other kinds of wood as tools. “In this case, the tools may be used off the ground, and they modify the shape and size by removing leaves and branches, for example. They may understand the physical properties of these tools,” he said. “We expected to observe this behavior in other less terrestrial populations, but it appears not to be the case. We have reports that it occurs occasionally but not habitually, as in Serra da Capivara.”
The monkeys may also use different tools in the same activity. “They may use a stone to enlarge a rock crevice and then use a twig to probe the hole for food, for example,” he said.

As a rule, males handle objects more than females, but skill does not vary by sex. “Males and females are good at manipulation once they’ve become adult and acquired the skill,” he said.

Primate archeology, Falótico explained, is a relatively new field. Among non-human primates, only chimpanzees, capuchin monkeys, and long-tailed or crab-eating macaques use tools. “We now know that when capuchin monkeys bang stones together, they create flakes that closely resemble those made by the first humans,” Falótico said. “The same goes for the simpler percussive tools – stones used for hammering and pounding – which can be confused with tools used by humans for the same purposes. In short, we provide more data for archeologists, who often come across these remains.”

Creating a primate tool library is one of the aims of the Young Investigator project. “If the tools are described, it will be easier for archeologists and anthropologists to know at a later stage which groups used them and for what purpose,” he said.

In this study specifically, the sample comprised 29 tools: 16 were used solely for pounding, 12 for digging, and one for stone-to-stone percussion. The technological analysis was based on a classification into active elements (hammers) and passive elements (anvils). The scientists set out to establish use-wear patterns, and to this end analyzed attributes such as general tool metrics, raw material, and surface traces such as fractures, impact points, battered areas formed by superimposed impacts, and percussive mark location.

The digging tools had fewer conspicuous use-wear marks on their surfaces when analyzed microscopically. Tools used to crush quartz most frequently had perceptible use-wear traces. Soft fruit and cashew nut processing tools displayed a wider spatial distribution of pounding marks than digging tools, although they also displayed a low degree of physical modification.

According to Falótico, tools differed more in terms of size than in terms of use-wear marks, especially those used for stone-to-stone percussion, which were much larger and heavier than the rest. “Digging stones are typically smaller,” he said. “Pounding stones vary according to the chosen object. The monkeys prefer larger stones to crack open a hard object.”

The researchers looked for traces of pollen among the residues found on the tools, in order to discover which plant species the monkeys preferred. “We identified starch grains and other non-pollen palynomorphs, such as fungal spores, algae and other organic elements found alongside pollen in palynology, the subdiscipline of botany in which pollen grains are examined and identified,” Falótico said. “We experienced some difficulty for lack of a reference library to identify the origin of the pollens and starches occurring in this part of the Caatinga.”