Beewolves use a gas to preserve food 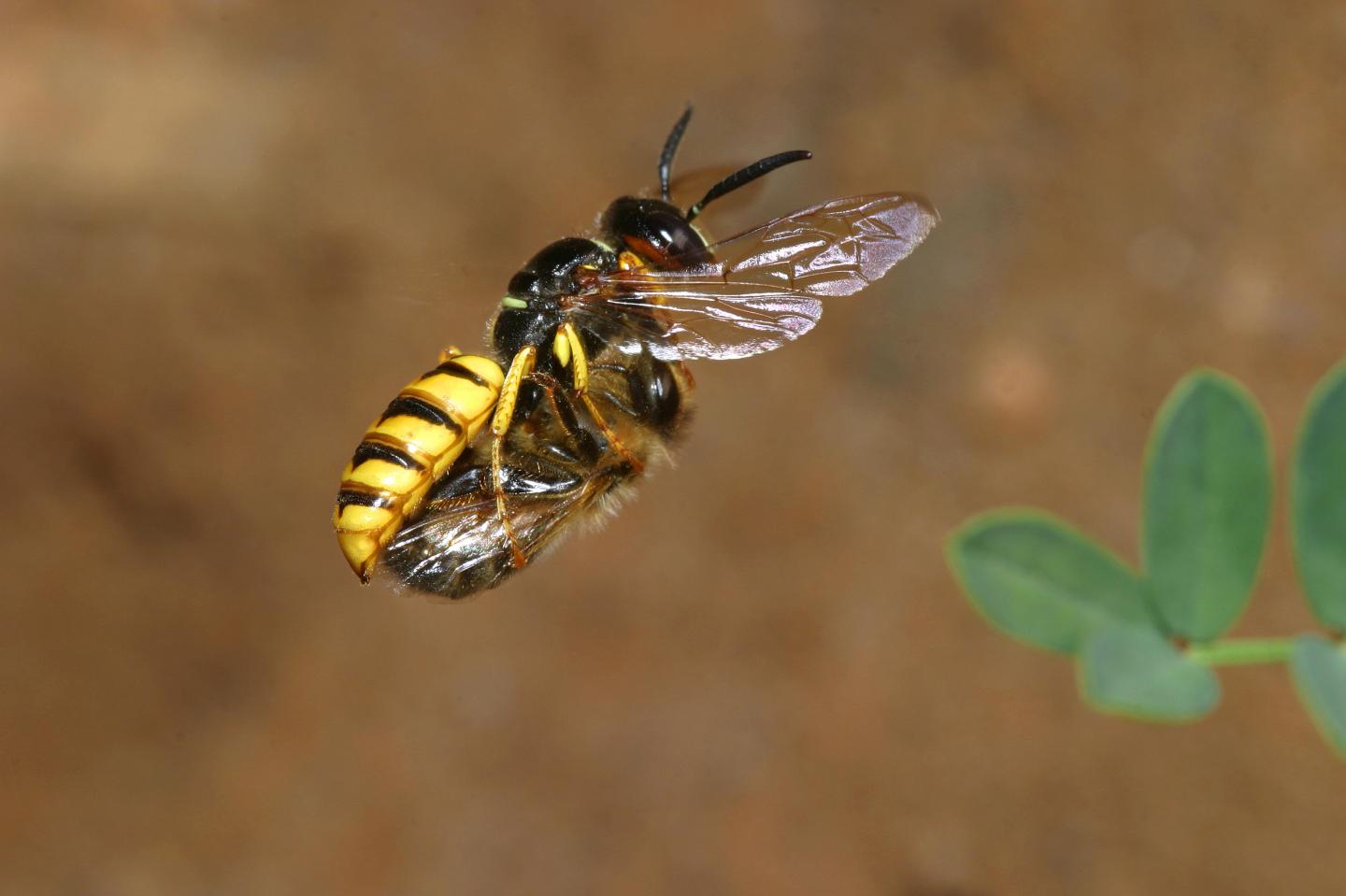 Food stored in warm and humid conditions gets moldy very quickly und thus becomes inedible or even toxic. To prevent this, we use refrigerators and freezers as well as various other methods of preservation. Animals do not have such technical appliances and therefore need to find other ways to preserve food. The European beewolf Philanthus triangulum, a solitary wasp species whose females hunt honey bees, has evolved a successful method of food preservation. A female takes up to five honey bees into its brood cells where they serve as food for a young beewolf. Female beewolves prefer to build their nests in sunlit and sandy places. The nests are deep and therefore the brood cells are warm and humid. Such conditions are favorable for the development of the beewolf larvae; however, they also foster the growth of mold fungi. As a matter of fact, bees stored under such conditions in the lab were overgrown by mold within one to three days. Surprisingly, the mold risk for bees was much lower in the nests of beewolves, so that most beewolf larvae were able to finish their eight to ten-day development until they spin a cocoon.

Researchers from the University of Regensburg and the Johannes Gutenberg University in Mainz (previously at the Max Planck Institute for Chemical Ecology in Jena) have discovered an amazing mechanism that the beewolves have evolved in order to make sure that their larvae’s food does not get moldy. “Shortly after oviposition, the brood cells of beewolves smell strikingly like ‘swimming pool’. This smell comes from the egg itself”, explains Prof. Dr. Erhard Strohm, the leader and main author of the study. Bioassays showed that beewolf eggs emit a gas that efficiently kills mold fungi. A chemical analysis revealed the surprising result that the gas is nitric oxide (NO). The eggs produce nitric oxide in large quantities and release it to the air where is reacts with atmospheric oxygen to nitrogen dioxide (NO2). The measured NO2 concentrations in the brood cells exceed both the occupational exposure limits of NO and NO2 as well as the EU maximum permissible values in cities.

Both NO and NO2 are very reactive and have a strong oxidizing effect. Therefore it is not surprising that high concentrations of the gases kill mold fungi. But how can beewolf eggs synthesize such amounts of NO? The scientists hypothesize that the fact that NO plays an extremely important role in many biochemical processes in almost all organisms from bacteria to mammals is a crucial precondition for the evolution of this mechanisms. In low doses and due to its high diffusion and reactivity, NO functions as a signal molecule and is, for example, involved in the adjustment of blood pressure and in developmental processes. Higher concentrations are used by many animals as an immune response to kill pathogens. Although beewolf eggs produce enormous amounts of NO, they use the same enzymes, NO synthases, which are also used by other organisms. Also, the responsible NO synthase gene in beewolves does not have any special characteristics. However, the researchers found a modification in the translation of the gene into the protein, which may be responsible for the unusually high synthesis rate of NO in beewolf eggs. “Due to so-called alternative splicing the enzyme in the beewolf eggs lacks a segment which may be responsible for regulation. This may have led to the significant increase in enzyme activity,” says Dr. Tobias Engl, the second main author of the publication.

The use of a reactive gases to control mold on food supplies has improved survival of beewolf offspring considerably and represents an evolutionary key invention. This novel defense mechanism against microorganisms is a fascinating example of how existing processes are modified in the course of evolution in such a way that completely new functions are generated. The discovery of NO as a key defense component against mold fungi increases the spectrum of natural antimicrobial strategies and adds a surprising and intriguing facet to our understanding of this biologically important molecule.

The most amazing aspect of the defense strategy of beewolf eggs is the fact that the eggs are obviously able to survive the extremely toxic conditions they produce themselves. Which mechanism the eggs deploy is the subject of current investigations. The results may not only be interesting for basic research, but also for possible applications in human medicine. A harmful overproduction of NO may also be the result of certain diseases or acute infections. The mechanisms that beewolf eggs use to protect themselves from NO may help to find new therapeutic approaches.