Beam me up Scotty! Quantum teleportation of a particle of light six kilometers 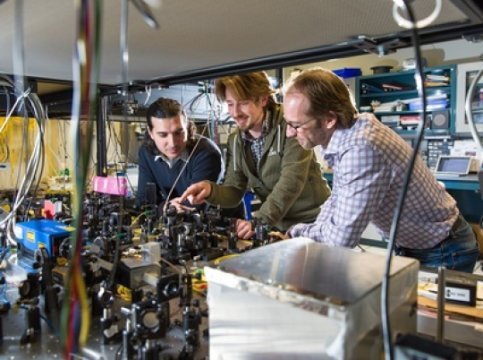 What if you could behave like the crew on the Starship Enterprise and teleport yourself home or anywhere else in the world? As a human, you're probably not going to realize this any time soon; if you're a photon, you might want to keep reading.

This accomplishment, which set a new record for distance of transferring a quantum state by teleportation, has landed the researchers a spot in the journal Nature Photonics. The finding was published back-to-back with a similar demonstration by a group of Chinese researchers.

"Such a network will enable secure communication without having to worry about eavesdropping, and allow distant quantum computers to connect," says Tittel.

Experiment draws on 'spooky action at a distance'

The experiment is based on the entanglement property of quantum mechanics, also known as "spooky action at a distance" — a property so mysterious that not even Einstein could come to terms with it.

"Being entangled means that the two photons that form an entangled pair have properties that are linked regardless of how far the two are separated," explains Tittel. "When one of the photons was sent over to City Hall, it remained entangled with the photon that stayed at the University of Calgary."

Next, the photon whose state was teleported to the university was generated in a third location in Calgary and then also travelled to City Hall where it met the photon that was part of the entangled pair.

"What happened is the instantaneous and disembodied transfer of the photon's quantum state onto the remaining photon of the entangled pair, which is the one that remained six kilometres away at the university," says Tittel.

The research could not be possible without access to the proper technology. One of the critical pieces of infrastructure that support quantum networking is accessible dark fibre. Dark fibre, so named because of its composition — a single optical cable with no electronics or network equipment on the alignment — doesn't interfere with quantum technology.

The City of Calgary is building and provisioning dark fibre to enable next-generation municipal services today and for the future.

"By opening The City's dark fibre infrastructure to the private and public sector, non-profit companies, and academia, we help enable the development of projects like quantum encryption and create opportunities for further research, innovation and economic growth in Calgary," said Tyler Andruschak, project manager with Innovation and Collaboration at The City of Calgary.

"The university receives secure access to a small portion of our fibre optic infrastructure and The City may benefit in the future by leveraging the secure encryption keys generated out of the lab's research to protect our critical infrastructure," said Andruschak. In order to deliver next-generation services to Calgarians, The City has been increasing its fibre optic footprint, connecting all City buildings, facilities and assets.

As if teleporting a photon wasn't challenging enough, Tittel and his team encountered a number of other roadblocks along the way.

Due to changes in the outdoor temperature, the transmission time of photons from their creation point to City Hall varied over the course of a day — the time it took the researchers to gather sufficient data to support their claim. This change meant that the two photons would not meet at City Hall.

Secondly, parts of their lab had to be moved to two locations in the city, which as Tittel explains was particularly tricky for the measurement station at City Hall which included state-of-the-art superconducting single-photon detectors developed by the National Institute for Standards and Technology, and NASA's Jet Propulsion Laboratory.

"Since these detectors only work at temperatures less than one degree above absolute zero the equipment also included a compact cryostat," said Tittel.

Milestone towards a global quantum Internet

This demonstration is arguably one of the most striking manifestations of a puzzling prediction of quantum mechanics, but it also opens the path to building a future quantum internet, the long-term goal of the Tittel group.

The above post is reprinted from materials provided by University of Calgary. The original item was written by Drew Scherban, University Relations. Note: Content may be edited for style and length.