Citizen scientists recorded trash on Pacific Northwest beaches, from southern Oregon to Anacortes, Washington, to contribute to the growing study of marine trash. A study by the University of Washington analyzed 843 beach surveys and found that certain beaches, and certain areas of a single beach, are “sticky zones” that accumulate litter. 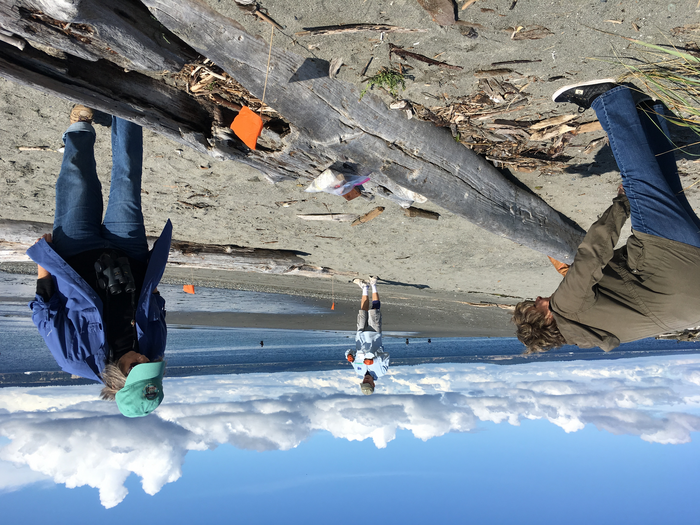 Citizen scientists recorded trash on Pacific Northwest beaches, from southern Oregon to Anacortes, Washington, to contribute to the growing study of marine trash. A study by the University of Washington analyzed 843 beach surveys and found that certain beaches, and certain areas of a single beach, are “sticky zones” that accumulate litter.

The study was published online Aug. 11 in Marine Pollution Bulletin.

“Thousands of volunteer hours allowed us to investigate what is driving the rubbish washing up on our beaches, and where it’s ending up,” said lead author Kathy Willis, a UW visiting scientist who is a postdoctoral researcher at the Commonwealth Scientific and Industrial Research Organization, or CSIRO, in Australia. “Understanding how trash moves through the marine environment provides us with important clues to identify sources and implement strategies to prevent more trash escaping.”

All the data were collected by volunteers with COASST, the Coastal Observation and Seabird Survey Team. The UW-based citizen science effort began in the 1990s to study seabirds. In late 2015 the team added a group of volunteers focused on observing marine litter.

The new paper uses observations of medium-sized refuse, between 1 and 20 inches (from the width of a thumbnail to the length of a forearm), from 2017 to 2021. Volunteers collect data year-round at distinct zones on each beach.

“Trained volunteers with COASST are able to go out and observe many locations with a frequency that just wouldn’t be possible any other way,” Willis said.

The study used statistical analysis to confirm that some parts of the beach are “sticky zones.” One such natural resting spot for garbage is the so-called wrack zone, the high-tide mark where kelp and other organic material accumulates. Another place trash likes to land is the wood zone, where driftwood washes up in storms and comes to rest. In general, beaches with more organic flotsam also tended to have more litter.

Results also showed very different patterns for the 36 beaches surveyed in Puget Sound compared with the 27 beaches surveyed on the outer coast of Washington and Oregon. In the protected waters of Puget Sound, about half the waste was plastic, with the rest being heavier objects like metal, glass or cement. This suggests that Puget Sound litter tends to originate from that area or neighboring beaches, according to the authors.

But on the outer coast, 90% of the observed items were plastic, mainly broken-down fragments of larger objects. The litter on the outer coast also showed a strong seasonal pattern, with more trash in the spring after winter storms, and lower litter levels in the fall.

“In populated areas of Puget Sound, what the data suggest is that if you see a lot of trash, someone probably dumped it nearby or it escaped accidentally,” said co-author Jackie Lindsey, Science Coordinator at COASST. “But if there’s a lot of trash in a remote region, the people who live there are not necessarily the people who are creating that trash — they’re just the ones who are dealing with it once it lands.”

Knowing where and when beach litter tends to accumulate could help improve programs that collect and remove trash. The findings could also help managers evaluate strategies to prevent beach litter, such as launching educational campaigns around marine waste, installing secure trash bins, and banning plastic bags and other single-use products.

“A lot of times people say: ‘There’s trash out there, let’s just go out and clean it up,’” Lindsey said. “But we need to also take a step back and use science to document how things happen in the system upstream, looking at the source of the problem to target our responses.”

Results show that the total amount of beach trash in the region dipped slightly from 2017 to 2021, but the authors caution that it’s too early to know that it’s a downward trend.

“It’s really exciting to have this baseline data,” Willis said. “We now know what type of rubbish is showing up in this region and what is driving it, so in the future we’ll be better able to evaluate how things might be changing.”

Other co-authors are Timothy Jones, Rachel Cohen and Julia Parrish at the UW, and Hillary Burgess at the National Oceanic and Atmospheric Administration. The research was supported by a grant from the Australian-American Fulbright Commission and by the more than 280 volunteers who collected data on the beach.