URBANA, Ill. – Imagine if you had to catch every bite of your dinner with your mouth, while flying, in the dark. You’d be exhausted, and probably pretty hungry. Though some bats go for sedentary insects, most catch their food on the wing every single night. Let that sink in. 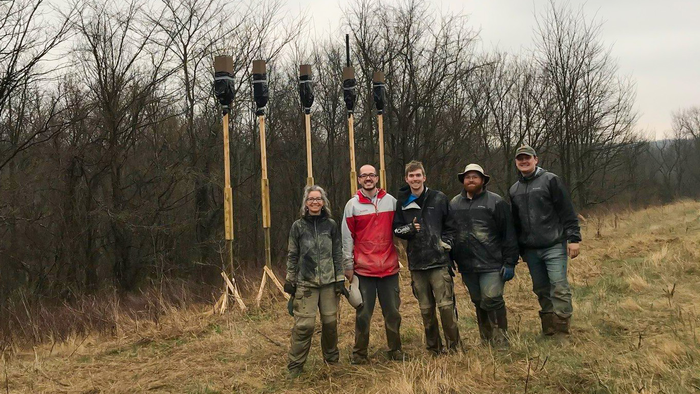 URBANA, Ill. – Imagine if you had to catch every bite of your dinner with your mouth, while flying, in the dark. You’d be exhausted, and probably pretty hungry. Though some bats go for sedentary insects, most catch their food on the wing every single night. Let that sink in.

Because they expend so much energy this way, bats switch among a couple energetic strategies. The most energy-conserving of these is heterothermy. It involves lowering body temperature and metabolism to match the environment in cold weather. Endothermy, maintaining a constant internal temperature, requires more energy.

Either way, the outside temperature is important. During heterothermic periods, bats and developing pups could suffer if their environment cools off too much or too quickly. Excessive heat or cold can also impact energy reserves during endothermic phases. New University of Illinois research looks at the effect of bat box design and placement on the energetic balance of endangered Indiana bats.

“The temperature of the roost is really important because it influences the energetic expenditure of the bat during the summer. When reproductive females are rearing a pup, really cold roosts either force them into torpor (heterothermy) or make them increase their energetic expenditure to try and stay warm,” says Reed Crawford, a doctoral student in the Program in Ecology, Evolution, and Conservation Biology at Illinois and lead author on a new paper in Conservation Physiology. “Additionally, bats have to pant, spread saliva, wing fan, or move locations to cool themselves in overly hot roosts, and that takes energy too.”

The energy a mother bat expends can affect pup development and influences both the mom and pup’s survival over the winter. If bats use too much energy staying warm, that energy can’t go towards growth or building fat reserves needed to get through hibernation. When roosts are too cold, pup development slows down. With deadly white-nose syndrome affecting bats during their winter sleep, it’s important they enter hibernation in tip-top shape.

Crawford and co-author Joy O’Keefe, an assistant professor and wildlife extension specialist in the Department of Natural Resources and Environmental Sciences at Illinois, tested five bat box designs and four landscape placements to determine how they affected endangered Indiana bats during heterothermic and endothermic periods.

“We measured energetic expenditure and overheating risk, looking for boxes that could maintain a balance between the two,” Crawford says. “The external water jacket design allowed continuously endothermic bats to use the least energy. This box also reduced overheating risk compared to the other designs.”

Boxes with white-tile roofs and chimneys decreased overheating risk, but the design modifications made boxes cooler, increasing the energetic expenditure necessary to warm endothermic bats. Still, O’Keefe says these designs could reduce the risk of overheating in especially hot or sunny conditions.

When bats were in heterothermic mode, box design wasn’t as important.

“Rocket boxes offer a really large gradient in temperature, sometimes as much as 10 degrees Celsius from top to bottom. And they offer roosting positions to the north, south, east, and west. With all that variability, our models show bats could move around and find a position suitable for torpor in most box designs,” Crawford says.

The boxes were installed in clusters at each of four landscape placements: in the open, in closed-canopy forest, and in eastern- and western-facing locations. It turned out placement made a big difference, as well.

“In terms of energetic expenditure, landscape placement is the dominant factor determining whether the roost is going to overheat. If the roost gets a lot of sunlight, it’s really important to think critically about what box design you’re going to place there because it is going to be at risk of overheating on sunny days,” Crawford says. “On the other hand, forest placements in full shade allowed heterothermic bats to drop into deeper torpor, potentially saving some energy.”

“There’s no one-size-fits-all for bat boxes. There’s no one location that fits all. We know bat boxes have some deficiencies. They’re good for continuous endothermy until they overheat. Then they’re not good anymore. But when small boxes are jam-packed with bats, they won’t provide suitable conditions for torpor unless it’s a cool day or they’re placed under a full canopy,” she says. “We still don’t know enough about how boxes compare with natural roosts used by various bat species, so there’s still a lot of work to do.”

But for now, in the current study system, it looks like rocket boxes with external water jackets may be a good option for some bats, especially those that need to recover from white-nose syndrome in the spring.

“With some bat box users declining more than 90% due to white-nose syndrome, even small energy savings could help,” O’Keefe says.