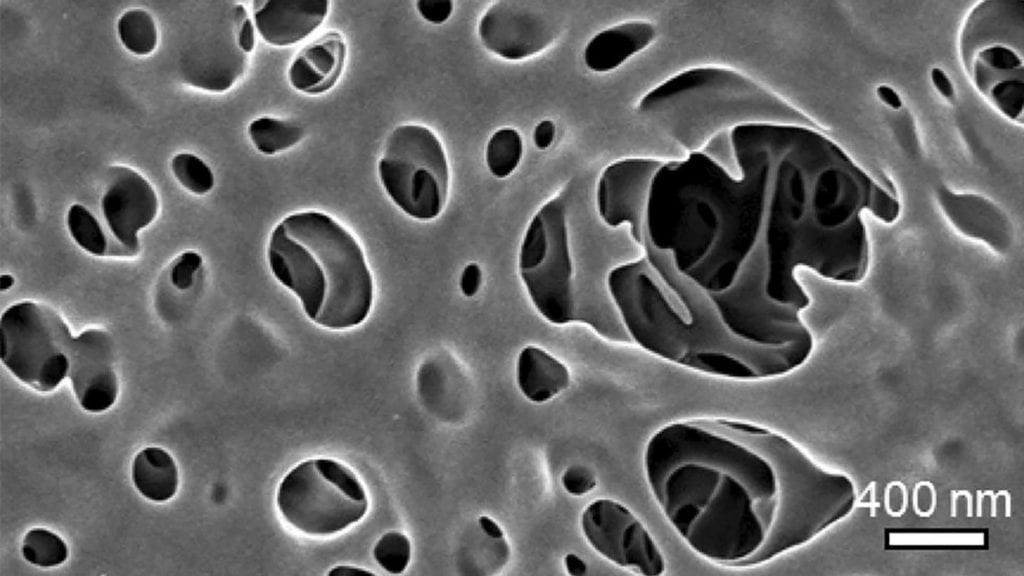 Argonne researchers have demonstrated a new technique’s viability for membranes.

Whether it’s tap water or a cup of coffee, almost everything we drink passes through some kind of filter. The ability to transform liquids this way is essential to daily life, yet it often rests on relatively delicate membranes that can quickly clog or degrade.

Scientists at the U.S. Department of Energy’s (DOE) Argonne National Laboratory are designing ways to treat membranes so they can filter liquids better and resist degradation from industrial processing chemicals and biofoulants. Argonne’s patented sequential infiltration synthesis (SIS) technique can fundamentally alter a membrane from within, allowing for much greater control over its chemical makeup and pore size.

SIS has shown promise for semiconductor manufacturing, optical coatings and sponges that clean oil spills. Now, for the first time, Argonne researchers have demonstrated the technique’s viability for membranes.

First conceived in 2010 by Argonne researchers, SIS is a cousin of atomic layer deposition, or ALD. Both techniques use chemical vapors to alter the interface of a material such as a membrane.

“But there is one important shortcoming of ALD for this application,” said Seth Darling, director of the Institute for Molecular Engineering at Argonne and the Advanced Materials for Energy-Water Systems Energy Frontier Research Center. “As you coat pores in a membrane with a technique like ALD, you’re constricting them.”

That’s because ALD basically adds layers on top of the membrane, which slowly decreases the pore diameters — much the way you would restrict air flow through a vent in the wall if you kept painting over it. SIS, on the other hand, grows material inside the membrane structure itself, changing its chemistry without significantly affecting the pore shape.

“SIS can achieve many of the things that ALD can achieve in terms of engineering the interface,” Darling said, “but with minimal pore constriction.”

Nearly all commercial membranes are made of polymers — large molecules formed from repeating chains of smaller molecules. SIS makes use of the space between those molecules, penetrating the surface of the membrane and diffusing into it with an inorganic material. In their proof of concept, Darling and colleagues used SIS to plant the “seeds” for aluminum oxide and grew it within polyethersulfone (PES) ultrafiltration (UF) membranes, making them more resilient without compromising filtration ability. The results were published online on September 24 in JOM, the journal of The Minerals, Metals and Materials Society.

The SIS technique enables a range of improvements to membranes: the ability to prevent foulants from attaching to the surface, for example, or resistance to solvents that might be needed in an industrial setting but would dissolve conventional membrane materials.

The ability to engineer membranes this way can help cut costs at water treatment plants or in the chemical and pharmaceutical industries by reducing the downtime and cost associated with replacing spent membranes.

Darling and coworkers used SIS to create Oleo Sponge, which captures oil from water. In that case, a metal oxide grown within the sponge’s surface serves as a grafting site for oil-loving molecules.

“You can imagine a similar strategy with membranes,” he said, “Where you graft on molecules to lend some selectivity or other properties that you’re looking for.”

The research and development for the SIS technique was funded by DOE’s Basic Energy Sciences and conducted in part at Argonne’s Center for Nanoscale Materials, a DOE Office of Science User Facility. At this facility, the researchers performed filtration measurements, monitoring water flow through the membrane as a function of how much pressure is applied. The SIS technology, which has been patented and is available for licensing, emerges from Argonne’s leading role in interface engineering.

About Argonne’s Center for Nanoscale Materials
The Center for Nanoscale Materials is one of the five DOE Nanoscale Science Research Centers, premier national user facilities for interdisciplinary research at the nanoscale supported by the DOE Office of Science. Together the NSRCs comprise a suite of complementary facilities that provide researchers with state-of-the-art capabilities to fabricate, process, characterize and model nanoscale materials, and constitute the largest infrastructure investment of the National Nanotechnology Initiative. The NSRCs are located at DOE‘s Argonne, Brookhaven, Lawrence Berkeley, Oak Ridge, Sandia and Los Alamos National Laboratories. For more information about the DOE NSRCs, please visit https://science.energy.gov/bes/suf/user-facilities/nanoscale-science-research-centers/.

Declining snowpack over western US mapped at a finer scale

Scienmag Apr 3, 2019
Innovation could change how gene editing is approached in the futureCredit: Kevin Solomon/Purdue University …

Membraneless protocells could provide clues to formation of early life