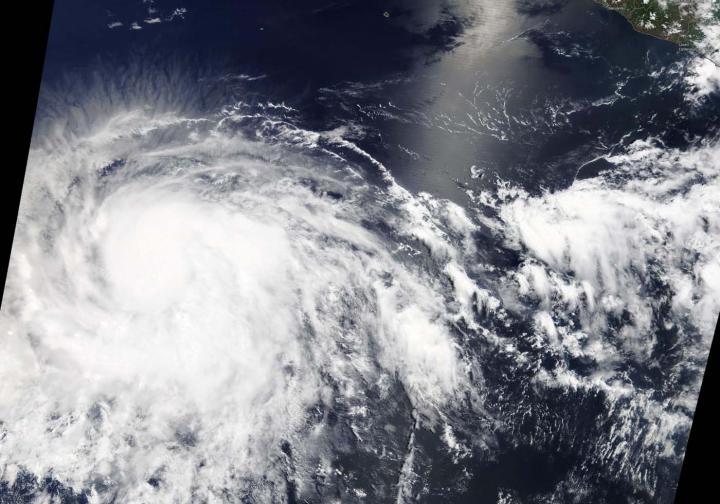 NASA’s Terra and Aqua satellites passed over the Eastern Pacific Ocean after Tropical Storm Barbara strengthened into the first hurricane of the season. Barbara intensified rapidly into a major hurricane.

NOAA’s National Hurricane Center (NHC) noted that Barbara intensified early during the morning of July 2 and could strengthen a little more. Fortunately, Barbara is over 1,000 miles west of the southern tip of Baja California, and there are no coastal watches or warnings in effect.

On July 2, the Moderate Resolution Imaging Spectroradiometer or MODIS instrument aboard NASA’s Terra satellite provided a visible image of Barbara that showed powerful thunderstorms circling an eye. Bands of thunderstorms wrapped into the center from the southern and eastern quadrants.

At 11 a.m. EDT (1500 UTC), the NHC noted the eye of Hurricane Barbara was located near latitude 12.5 degrees north and longitude 122.2 degrees west. Barbara is about 1,080 miles or 1,740 km southwest of the southern tip of Baja California, Mexico. Barbara is moving toward the west-northwest near 14 mph (22 kph). Barbara is forecast to slow in forward speed later today and then turn toward the northwest in a day or two. The estimated minimum central pressure is 948 millibars (28.00 inches).

Some additional strengthening is possible today, but weakening is likely to begin on Wednesday and continue into Thursday.

Want to know what climate change will do in your back yard? There’s a dataset…

How plants cope with iron deficiency