NASA’s Mars rovers strive for groundbreaking scientific discoveries as they traverse the Martian landscape. At the same time, the crews operating the rovers do all they can to protect them and the billions of dollars behind the mission. This balance between risk and reward drives the decisions surrounding where the rovers go, the paths they take to get there and the science they uncover. 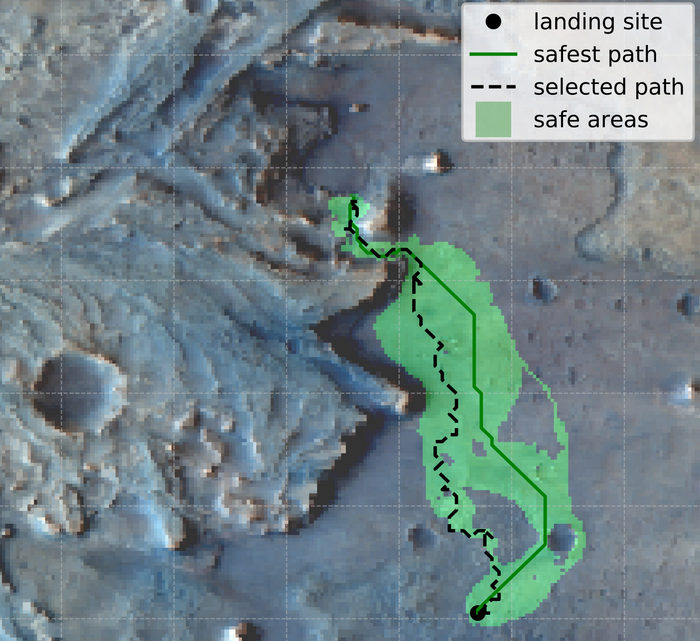 NASA’s Mars rovers strive for groundbreaking scientific discoveries as they traverse the Martian landscape. At the same time, the crews operating the rovers do all they can to protect them and the billions of dollars behind the mission. This balance between risk and reward drives the decisions surrounding where the rovers go, the paths they take to get there and the science they uncover.

Researchers in the School of Computer Science’s Robotics Institute (RI) have developed a new approach to balancing the risks and scientific value of sending planetary rovers into dangerous situations.

David Wettergreen, a research professor in the RI, and Alberto Candela, who earned his Ph.D. in robotics and is now a data scientist at NASA’s Jet Propulsion Laboratory, will present their work, “An Approach to Science and Risk-Aware Planetary Rover Exploration,” at the IEEE and RSJ International Conference on Intelligent Robots and Systems later this month in Kyoto, Japan.

“We looked at how to balance the risk associated with going to challenging places against the value of what you might discover there,” said Wettergreen, who has worked on autonomous planetary exploration for decades at Carnegie Mellon University. “This is the next step in autonomous navigation and to producing more and better data to aid scientists.”

For their approach, Wettergreen and Candela combined a model used to estimate science value with a model that estimates risk. Science value is estimated using the robot’s confidence in its interpretation of the mineral composition of rocks. If the robot believes it has identified rocks correctly without needing additional measurements, it may choose to explore somewhere new. If the robot’s confidence is low, however, it may decide to continue to study the current area and improve its mineralogical model. Zoë, a rover that for decades has tested technologies for autonomy, used a previous version of this model during experiments in 2019 in the Nevada desert.

The researchers determined risk through a model that uses the topography of the terrain and the terrain’s makeup material types to estimate how difficult it will be for the rover to reach a specific location. A steep hill with loose sand could doom a rover’s mission — a real concern on Mars. In 2004, NASA landed twin rovers, Spirit and Opportunity, on Mars. Spirit’s mission ended in 2009 when it became stuck in a sand dune and its wheels slipped when it tried to move. Opportunity carried on and worked until 2018.

Wettergreen and Candela tested their framework using real Mars surface data. The pair sent a simulated rover scurrying about Mars using this data, charting different paths based on varying risk, and then evaluated the science gained from these missions.

“The rover did very well on its own,” Candela said, describing the simulated Mars missions. “Even under high-risk simulations, there were still plenty of areas for the rover to explore, and we found that we still made interesting discoveries.”

This research builds on decades of RI work investigating autonomous planetary exploration. Papers stretching back into the 1980s propose and demonstrate methods that would allow rovers to move autonomously across the surface of other planets, and technology developed through this research has been used on recent Mars rovers.

Pioneering autonomous technology researchers at CMU proposed Ambler, a self-reliant, six-legged robot that could prioritize its goals and chart its own path on places like Mars. The team tested the six-meter-tall robot in the early 1990s. More rovers followed, including Ratler, Nomad and Hyperion — a rover designed to follow the sun as it travels to charge its batteries.

Zoë began its work in harsh environments in 2004 and has traveled hundreds of miles in Chile’s Atacama Desert, an environment in many ways similar to Mars. By 2012, Zoë’s missions in the desert shifted to focus on autonomous exploration and the decisions behind where to go and what samples to collect. A year later, the rover autonomously decided to drill into the desert soil, and it discovered what turned out to be unusual, highly specialized microbes, demonstrating that automated science can result in valuable discoveries.

Candela and Wettergreen hope to test their recent work on Zoë during an upcoming trip to the Utah desert. The pair also see their research making valuable contributions to future lunar exploration. Their approach could be used by scientists as a tool to investigate potential routes in advance and balance the risk of those routes with the science that could be gained. The approach could also assist a generation of autonomous rovers sent to the surface of planets to conduct science experiments without the need for continuous human involvement. The rover could assess the risk and reward before charting its own course.