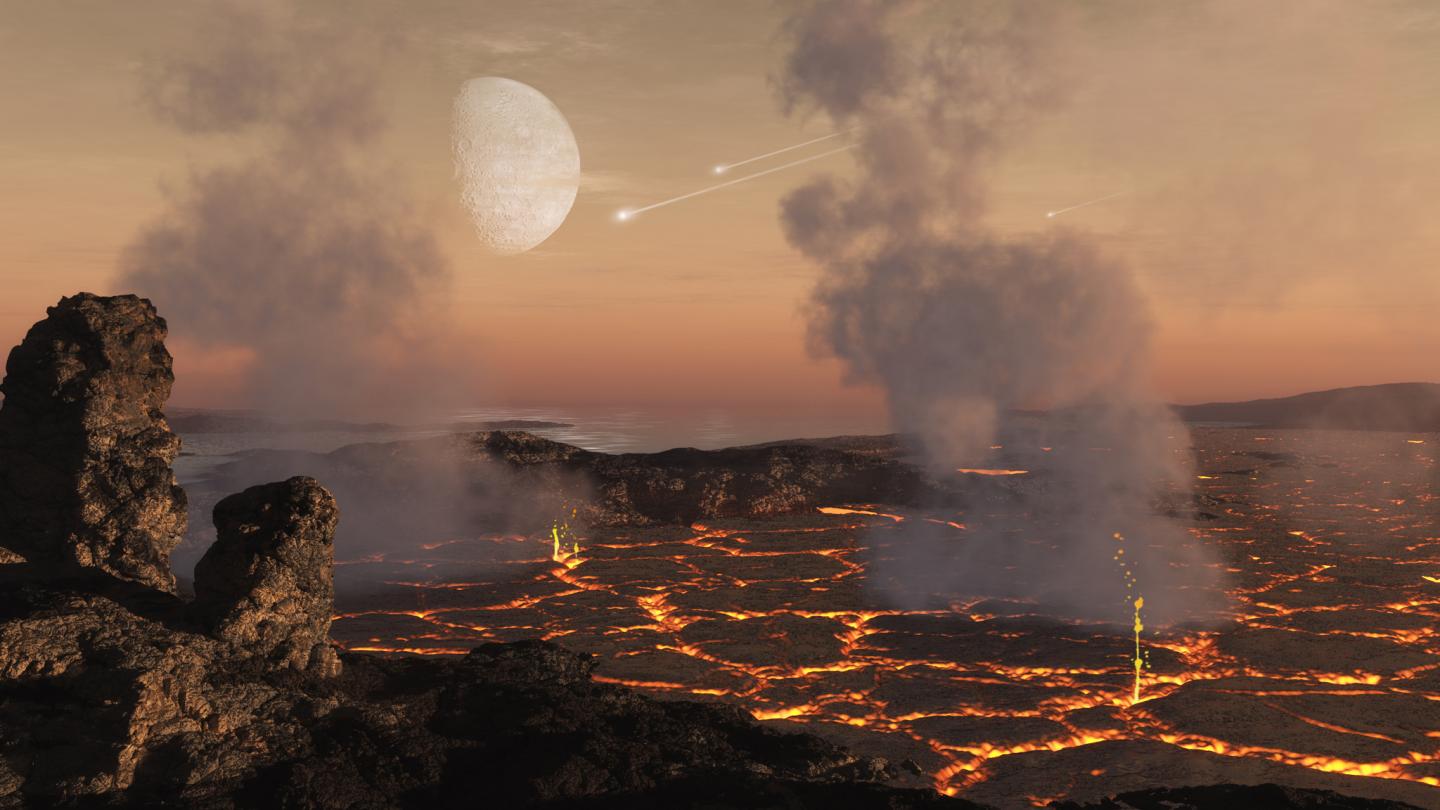 In a novel laboratory investigation of the initial atmospheres of Earth-like rocky planets, researchers at UC Santa Cruz heated pristine meteorite samples in a high-temperature furnace and analyzed the gases released.

Their results, published April 15 in Nature Astronomy, suggest that the initial atmospheres of terrestrial planets may differ significantly from many of the common assumptions used in theoretical models of planetary atmospheres.

“This information will be important when we start being able to observe exoplanet atmospheres with new telescopes and advanced instrumentation,” said first author Maggie Thompson, a graduate student in astronomy and astrophysics at UC Santa Cruz.

The early atmospheres of rocky planets are thought to form mostly from gases released from the surface of the planet as a result of the intense heating during the accretion of planetary building blocks and later volcanic activity early in the planet’s development.

“When the building blocks of a planet are coming together, the material is heated and gases are produced, and if the planet is large enough the gases will be retained as an atmosphere,” explained coauthor Myriam Telus, assistant professor of Earth and planetary sciences at UC Santa Cruz. “We’re trying to simulate in the laboratory this very early process when a planet’s atmosphere is forming so we can put some experimental constraints on that story.”

The researchers analyzed three meteorites of a type known as CM-type carbonaceous chondrites, which have a composition considered representative of the material from which the sun and planets formed.

“These meteorites are left over materials from the building blocks that went into forming the planets in our solar system,” Thompson said. “Chondrites are different from other types of meteorites in that they didn’t get hot enough to melt, so they have held onto some of the more primitive components that can tell us about the composition of the solar system around the time of planet formation.”

Working with materials scientists in the physics department, the researchers set up a furnace connected to a mass spectrometer and a vacuum system. As the meteorite samples were heated to 1200 degrees Celsius, the system analyzed the volatile gases produced from the minerals in the sample. Water vapor was the dominant gas, with significant amounts of carbon monoxide and carbon dioxide, and smaller amounts of hydrogen and hydrogen sulfide gases also released.

According to Telus, models of planetary atmospheres often assume solar abundances–that is, a composition similar to the sun and therefore dominated by hydrogen and helium.

“Based on outgassing from meteorites, however, you would expect water vapor to be the dominant gas, followed by carbon monoxide and carbon dioxide,” she said. “Using solar abundances is fine for large, Jupiter-size planets that acquire their atmospheres from the solar nebula, but smaller planets are thought to get their atmospheres more from outgassing.”

The researchers compared their results with the predictions from chemical equilibrium models based on the composition of the meteorites. “Qualitatively, we get pretty similar results to what the chemical equilibrium models predict should be outgassed, but there are also some differences,” Thompson said. “You need experiments to see what actually happens in practice. We want to do this for a wide variety of meteorites to provide better constraints for the theoretical models of exoplanetary atmospheres.”

Other researchers have done heating experiments with meteorites, but those studies were for other purposes and used different methods. “A lot of people are interested in what happens when meteorites enter Earth’s atmosphere, so those kinds of studies were not done with this framework in mind to understand outgassing,” Thompson said.

The three meteorites analyzed for this study were the Murchison chondrite, which fell in Australia in 1969; Jbilet Winselwan, collected in Western Sahara in 2013; and Aguas Zarcas, which fell in Costa Rica in 2019.

In addition to Thompson and Telus, the coauthors of the paper include Jonathan Fortney, Toyanath Joshi, and David Lederman at UC Santa Cruz and Laura Schaefer at Stanford University. This research was supported by NASA and the ARCS Foundation.