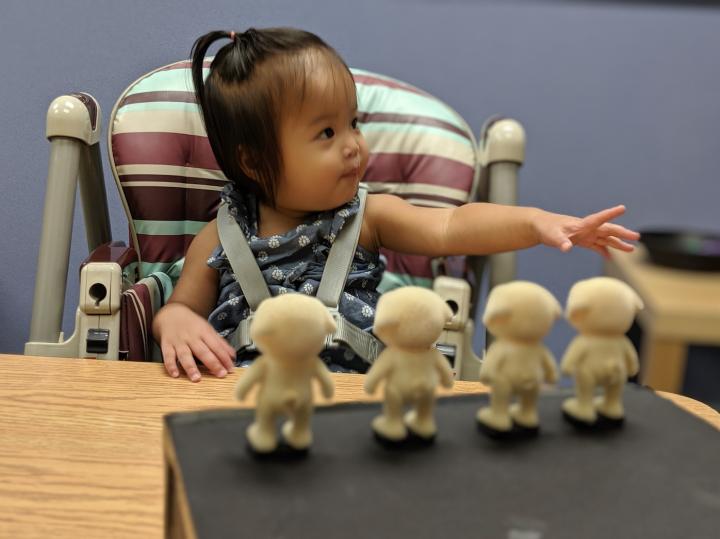 Babies who are years away from being able to say “one,” “two,” and “three” actually already have a sense of what counting means, Johns Hopkins University researchers have discovered.

The findings reveal that very early on, years earlier than previously believed, babies who hear counting realize that it’s about quantity.

“Although they are years away from understanding the exact meanings of number words, babies are already in the business of recognizing that counting is about number,” said senior author Lisa Feigenson, a cognitive scientist at Johns Hopkins who specializes in the development of numeric ability in children. “Research like ours shows that babies actually have a pretty sophisticated understanding of the world – they’re already trying to make sense of what adults around them are saying, and that includes this domain of counting and numbers.”

The findings are newly published in Developmental Science.

Most children don’t understand the full meaning of number words until they’re about four years old. That’s surprising, Feigenson said, considering how much counting young children are exposed to.

“We buy counting books for babies and we count aloud with toddlers. All of that raises the question: Are kids really clueless about what counting means until they’re in the preschool years?”

To find out, Feigenson and first author Jenny Wang, a former graduate student at Johns Hopkins who is slated to become an assistant professor at Rutgers University, worked with 14 and 18-month-old infants. The babies watched as toys, little dogs or cars, were hidden in a box that they couldn’t see inside of, but could reach into.

Without counting, the babies had a hard time remembering that the box held four things. They tended to become distracted after the researchers pulled just one out – as if there was nothing else to see. But when the toys were counted, the babies clearly expected more than one to be pulled from the box. They didn’t remember the exact but they did remember the approximate number.

“When we counted the toys for the babies before we hid them, the babies were much better at remembering how many toys there were,” Wang said. “As a researcher these results were really surprising. And our results are the first to show that very young infants have a sense that when other people are counting it is tied to the rough dimension of quantity in the world.”

Johns Hopkins University news releases are available online, as is information for reporters. To arrange a video or audio interview with a Johns Hopkins expert, contact a media representative listed above or visit our studio web page. Find more Johns Hopkins stories on the Hub.

Scienmag Aug 20, 2019
The TRF1 protein is only present at telomeres, but it has an effect on the entire genome that is essential for the…

Here’s a bitter pill to swallow: Artificial sweeteners may be…