The cover for issue 62 of Oncotarget features Figure 7, ‘Proposed model of the hyperploid pathway as a salvage survival strategy regulated by the G2-M checkpoint,’ by Yeung, et al. 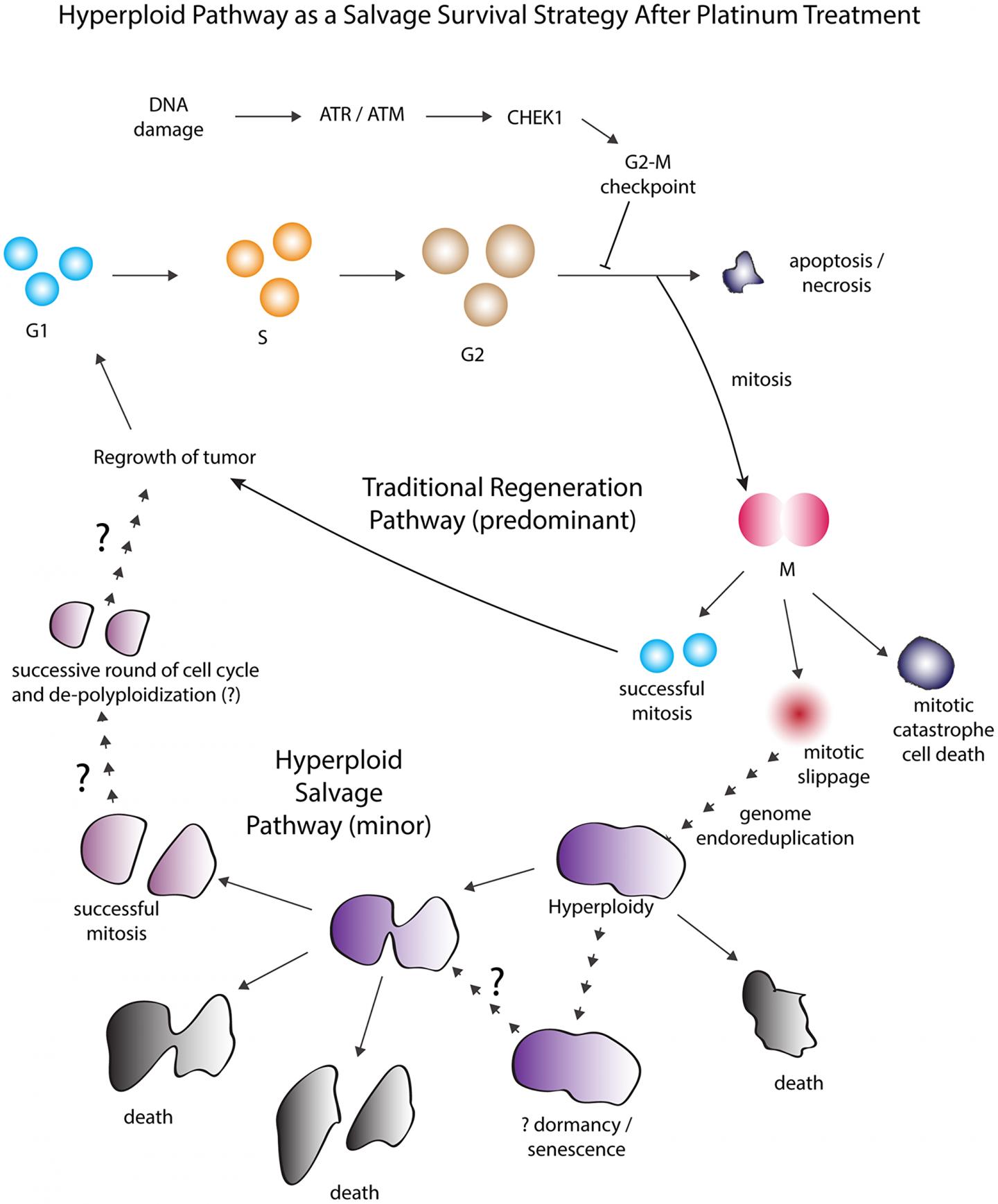 The cover for issue 62 of Oncotarget features Figure 7, “Proposed model of the hyperploid pathway as a salvage survival strategy regulated by the G2-M checkpoint,” by Yeung, et al.

Subpopulations of tumor cells may exhibit diverging behaviors from the bulk tumor due to an alternate stress response that diverts tumor cells from apoptotic death.

In this study, the researcher identified a salvage survival pathway in which G2-arrested tumor cells bypassed apoptosis and progressed through aberrant mitotic events to then emerge as a distinct subpopulation of viable large hyperploid cells but with uncertain long-term propagation potential.

For tumor cells lacking a functional G1-S checkpoint such as in high grade serous carcinoma where the retinoblastoma and p53 pathways are perturbed, an arrest in cell cycle at the G2 phase is critical for DNA damage repair.

Figure 7: Proposed model of the hyperploid pathway as a salvage survival strategy regulated by the G2-M checkpoint. Hyperploid pathway as a salvage survival strategy after moderate to high but not extreme concentration of platinum treatment (i.e. 20–100 uM). After platinum treatment, the activation of the G2-M cell cycle checkpoint led to the initial arrest of tumor cells at the G2-phase for DNA damage repair. Under the traditional regeneration pathway, tumor cells that did not perform sufficient DNA damage repair would undergo cell death such as by apoptosis or necrosis whereas others that achieved higher level of repair would eventually emerge from the G2 arrest and progress through mitosis to produce viable daughter cells. These normal progenies would predominantly contribute to the regeneration of the tumor cell line. However, an alternate salvage survival pathway was observed in which some of the initially G2-arrested tumor cells with residual DNA damage burden could avoid apoptotic cell death and aberrantly progress through mitosis at an intermediate to late time point. The perilous entry into mitosis while carrying residual DNA damage led mostly to mitotic catastrophe cell death. But there were occasional tumor cells that managed to exit mitosis via mitotic slippage and thereby avoided mitotic death. Following mitotic slippage, subsequent less-defined processes thought to result in the duplication of the genome led these cells to a hyperploid state. Although these de novo generated hyperploid tumor cells may continue to persist in this state, some may die while a substantial fraction would undergo mitosis. The chance for successful mitotic completion depended critically on the initial platinum treatment concentration and only those that were derived from the lowest treatment concentration could produce viable progenies. It remains to be further explored whether and how these unique progenies would contribute to the diversity of the regenerating tumor cell line.

The entry to mitosis with residual DNA damage often results in mitotic catastrophe-mediated cell death but occasional tumor cells may circumvent mitotic death by failure to complete telekinesis and revert back to a single cell state termed mitotic slippage .

While chemotherapy treatment induces apoptotic cell death in the tumor, there are additional morphologic changes within the treated tumor field that suggest alternate mode of cell death or occasional survival via non-canonical response to treatment.

The cell cycle and DNA ploidy status are then additionally correlated with markers of key cellular programs such as the DNA damage response and G2-M cell cycle checkpoint pathway via immunofluorescence staining.

As this approach analyzes all tumor cells within a population at the single cell level, distinct subpopulational responses to treatment within the bulk tumor cell line can be revealed.

The Rottapel/Kapus Research Team concluded, “The efficacy of this pathway to produce viable progenies was low and highly contingent on the initial platinum concentration that generated the hyperploid cells.

Potentially, the coupled process of hyperploidization and de-polyploidization might increase the genomic diversity of the recovering tumor cell line and contribute to acquired platinum resistance.“