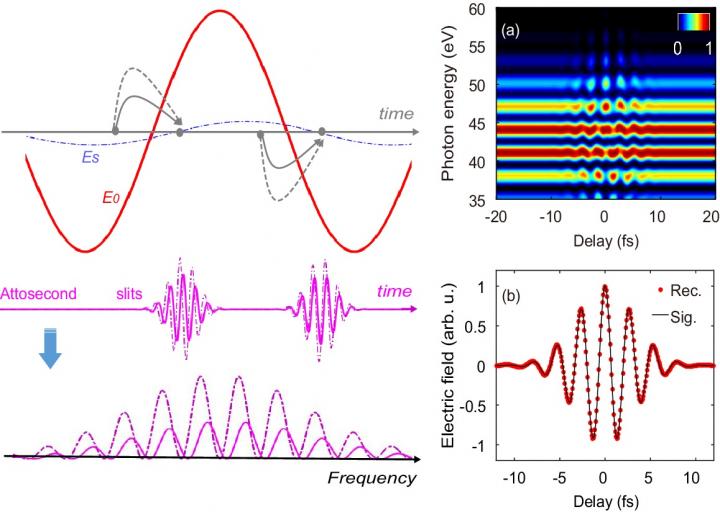 Space-momentum domain interferometer is a key technique in modern precision measurements, and has been widely for applications that require superb spatial resolution in engineering metrology and astronomy. Extending such interferometric technique to the time-energy domain is a significant complement to spatial domain measurements and is anticipated to provide time resolving capability for tracing ultrafast processes. However, such applications for high precision time domain measurement, especially the state of the art attosecond time resolved measurement is less explored despite its great significance.

Recently, the ultrafast optics team from Huazhong University of Science and Technology in China made exciting progress and developed an all-optical attosecond few slit interferometer and demonstrated its applications in time-energy domain high precision measurement. It is based on laser driven high order harmonics, which is essentially a time domain Young’s interferometer with the attosecond pulse train as the diffraction slits. By introducing an external weak field to perturb the harmonic generation process, the phase of the attosecond temporal slits changes resulting in a noticeable energy shift of the harmonics. The authors have derived a simple intuitive formula to depict the energy shift induced by the perturbing field, from which a wave-front controlled attosecond interferometry preserving attosecond temporal resolution and hundreds of meV energy resolution is implemented.

As the first application, the authors utilized the time resolving capability of the interferometer for real-time probing of a petahertz electromagnetic field. The strong field approximation analysis shows that the energy shift of the harmonics is proportional to a linear combination of two delayed perturbing pulses. Following a trivial Fourier analysis, the electric field of the perturbing pulse can be readily retrieved. Such method can be easily generalized for reconstructing signals with an arbitrary state of polarization

As the second application, the authors utilized the energy resolving capability of the interferometer to interrogate the abnormal phase jump of the transition dipole near a Cooper minimum in argon. When multiple harmonics are considered simultaneously, the time separation of attosecond slits becomes trackable in an energy resolved manner, and the reshaping of EUV temporal structure near a Cooper minimum in argon is clearly revealed. This novel attosecond interferometry has extended the interferometer-based high precision measurement to time-energy domain with an all-optical approach. It can potentially find significant applications in probing structural dynamics of complex targets.