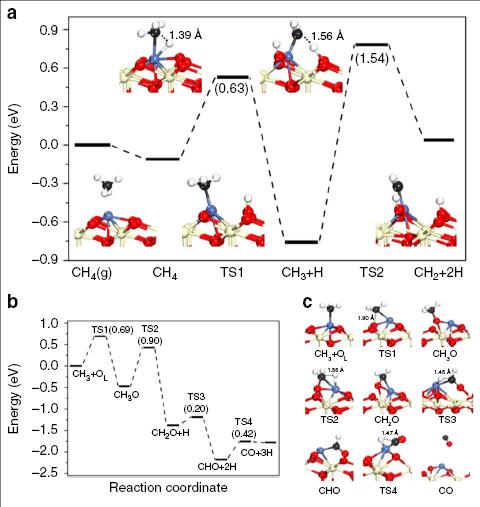 Dry reforming of methane (DRM) is the process of converting methane (CH4) and carbon dioxide (CO2) into synthesis gas (syngas). Since CO2 and CH4 are the two most important atmospheric greenhouse gases (GHGs), as well as abundant and low-cost carbon sources, DRM has the potential to mitigate rising GHG emissions and simultaneously realize clean(er) fossil fuel utilization.

Ni catalysts are the most promising candidates for DRM due to their low cost and high initial activity. However, in situ catalyst deactivation caused mainly by carbon deposition (coking) has hindered their commercial use.

Scientists at the Dalian Institute of Chemical Physics (DICP) of the Chinese Academy of Sciences have now developed completely coke-resistant Ni-based single-atom catalyst (SAC). Their findings were published in Nature Communications.

The scientists then doped HAP with cerium to stabilize Ni single atoms through strong metal-support interaction. The resulting HAP-Ce-supported Ni SAC was highly stable upon reaction, without any coke formation.

Further studies revealed that Ni SAC is intrinsically coke-resistant. In other words, no coke was formed at all during the reaction (in contrast with coke being formed then removed). The coke resistance of Ni SAC derives from the catalyst’s unique capacity for selective activation of the first C-H bond in CH4.

The finding in this work may provide a new approach for the development of highly coke-resistant Ni-based catalsyts and facilitate their commercialization.

Researchers discover the Achilles’ heel of an aggressive brain…