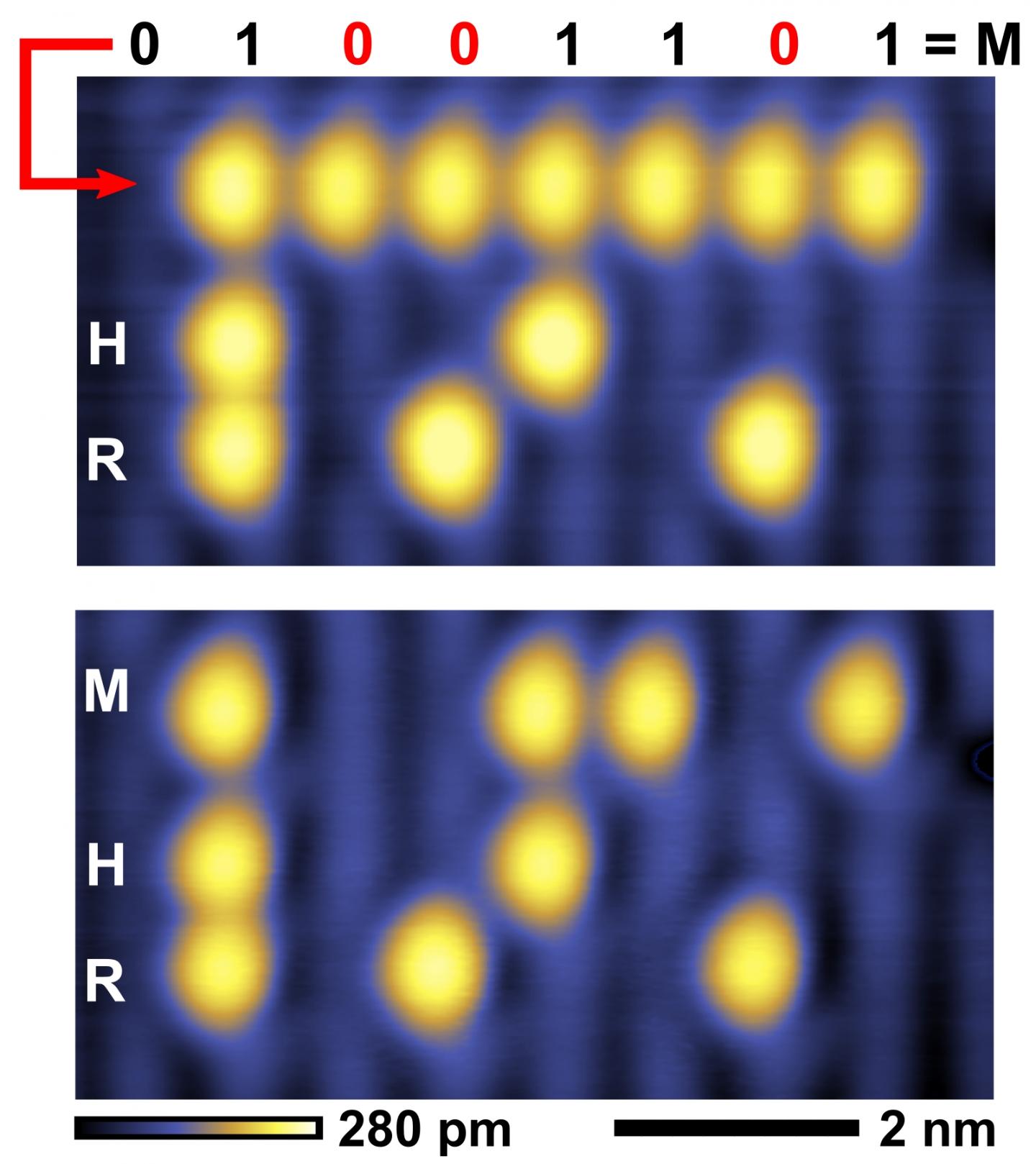 As computers continue to infiltrate almost every aspect of modern life, their negative impact on the environment grows. According to recent estimates, the electricity required to power today’s computers releases a total of more than 1 gigatonne of carbon emissions to the atmosphere each year. Now, researchers reporting in ACS Nano have developed a new manufacturing process that could enable ultra-efficient atomic computers that store more data and consume 100 times less power.

Scientists have previously manipulated single atoms to make ultra-dense memory arrays for computers, which store more data in a much smaller space than conventional hard drives and consume much less power. In a technique known as hydrogen lithography, researchers use the tip of a scanning tunneling microscope (STM) to remove single atoms of hydrogen bonded to a silicon surface. The pattern of silicon atoms bound to or lacking a hydrogen atom forms a binary code that stores the data. However, there is a bottleneck when rewriting the data because the STM tip must pick up and deposit hydrogen atoms at precise locations. Roshan Achal, Robert Wolkow and colleagues wanted to develop a more efficient method to rewrite atomic memory arrays.

The researchers prepared silicon surfaces covered with hydrogen atoms. With hydrogen lithography, they removed certain atoms to write data. The scientists found that by taking away an extra hydrogen atom next to a bit they wanted to rewrite, they could create a reactive site that attracted hydrogen gas that was infused into the chamber. Binding of a single hydrogen gas (H2) molecule to the two adjacent sites erased the sites so that a new binary code could be written. Using hydrogen gas as a molecular eraser to rewrite the data was much faster and easier than bringing in individual hydrogen atoms on an STM tip. The researchers demonstrated the technique’s ability to rewrite a small 24-bit memory array. The new method allows 1,000-times-faster fabrication of atomic-scale computers, making them ready for real-world manufacture, the researchers say.

The researchers have created a video about their work, which can be viewed here.

The American Chemical Society, the world’s largest scientific society, is a nonprofit organization chartered by the U.S. Congress. ACS is a global leader in providing access to chemistry-related information and research through its multiple databases, peer-reviewed journals and scientific conferences. ACS does not conduct research, but publishes and publicizes peer-reviewed scientific studies. Its main offices are in Washington, D.C., and Columbus, Ohio.

On balance, some neonicotinoid pesticides could benefit bees

Scienmag Jun 25, 2019
Credit: Kanazawa University The living cell can be viewed as a factory where protein machines are in charge of…

New staffing model for an integrated specialist team approach to…