Atomic nuclei in the quantum swing 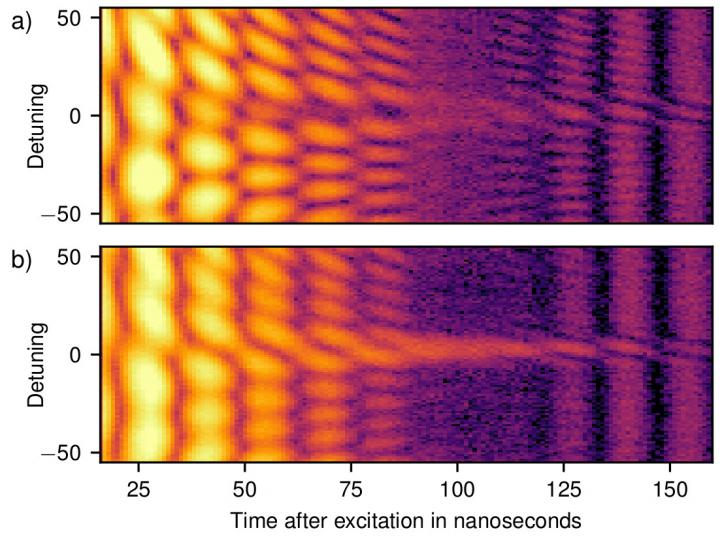 From atomic clocks to secure communication to quantum computers: these developments are based on the increasingly better control of the quantum behaviour of electrons in atomic shells with the help of laser light. Now, for the first time, physicists at the Max Planck Institute for Nuclear Physics in Heidelberg have succeeded in precisely controlling quantum jumps in atomic nuclei using X-ray light. Compared with electron systems, nuclear quantum jumps are extreme – with energies up to millions of times higher and incredibly short zeptosecond processes. A zeptosecond is one trillionth of a billionth of a second. The rewards include profound insight into the quantum world, ultra-precise nuclear clocks, and nuclear batteries with enormous storage capacity. The experiment required a sophisticated X-ray flash facility developed by a Heidelberg group led by Jörg Evers as part of an international collaboration.

One of the great successes of modern physics is the increasingly precise control of dynamic quantum processes. It enables a deeper understanding of the quantum world with all its oddities and is also a driving force of new quantum technologies. But from the perspective of the atoms, “coherent control” has so far remained superficial: it is the quantum jump of the electrons in the outer shell of the atoms that has become increasingly controllable by lasers. But as Christoph Keitel explains, the atomic nuclei themselves are also quantum systems in which the nuclear building blocks can make quantum jumps between different quantum states.

“In addition to this analogy to electron shells, there are huge differences”, explains the Director at the Max Planck Institute for Nuclear Physics in Heidelberg: “They’ve got us so excited!” Quantum jumps between different quantum states are actually jumps on a kind of energy ladder. “And the energies of these quantum jumps are often six orders of magnitude greater than in the electron shell”, says Keitel. A single quantum jump made by a nuclear component can thus pump up to a million times more energy into it – or get it out again. This has given rise to the idea of nuclear batteries with an unprecedented storage capacity.

Such technical applications are still visions of the future. At the moment, research entails addressing and controlling these quantum jumps in a targeted manner. This requires precisely controlled, high-energy X-ray light. The Heidelberg team has been working on such an experimental technique for over 10 years. It has now been used for the first time.

The quantum states of atomic nuclei offer another important advantage over electron states. Compared with the electronic quantum jumps, they are much more sharply defined. Because this translates directly into more accurate frequencies according to the laws of physics, they can, in principle, be used for extremely precise measurements. For example, this could enable the development of ultra-precise nuclear clocks that would make today’s atomic clocks look like antiquated pendulum clocks. In addition to technical applications of such clocks (e.g. in navigation), they could be used to examine the fundamentals of today’s physics much more precisely. This includes the fundamental question of whether the constants of nature really are constant. However, such precision techniques require the control of quantum transitions in the nuclei.

The principle of the Heidelberg experimental technique sounds quite simple at first. It uses pulses (i.e. flashes) of high-energy X-ray light, which are currently provided by the European Synchrotron Radiation Source ESRF in Grenoble. The experiment splits these X-ray pulses in a first sample in such a way that a second pulse follows behind the rest of the first pulse with a time delay. One after the other, both encounter a second sample, the actual object of investigation.

The first pulse is very brief and contains a broad mix of frequencies. Like a shotgun blast, it stimulates a quantum jump in the nuclei; in the first experiment, this was a special quantum state in nuclei of iron atoms. The second pulse is much longer and has an energy that is precisely tuned to the quantum jump. In this way, it can specifically manipulate the quantum dynamics triggered by Pulse 1. The time span between the two pulses can be adjusted. This allows the team to adjust whether the second pulse is more constructive or destructive for the quantum state.

The Heidelberg physicists compare this control mechanism to a swing. With the first pulse, you push it. Depending on the phase of its oscillation in which you give it a second push, it oscillates even stronger or is slowed down.

But what sounds simple is a technical challenge that required years of research. A controlled change in the quantum dynamics of an atomic nucleus requires that the delay of the second pulse is stable on the unimaginably short time scale of a few zeptoseconds. Because only then do the two pulses work together in a controlling way.

A zeptosecond is one trillionth of a billionth of a second – or a decimal point followed by 20 zeroes and a 1. In one zeptosecond, light does not even manage to pass through one per cent of a medium-sized atom. How can you imagine this in relation to our world? “If you imagine that an atom were as big as the Earth, that would be about 50 km, says Jörg Evers, who initiated the project.

The sample is shifted by 45 trillionths of a metre

The second X-ray pulse is delayed by a tiny displacement of the first sample, also containing iron nuclei with the appropriate quantum transition. “The nuclei selectively store energy from the first X-ray pulse for a short period of time during which the sample is rapidly shifted by about half a wavelength of X-ray light”, explains Thomas Pfeifer, Director at the Max Planck Institute for Nuclear Physics in Heidelberg. This corresponds to about 45 trillionths of a metre. After this tiny movement, the sample emits the second pulse.

The physicists compare their experiment to two tuning forks that are at different distances from a firecracker (Figure 2). The bang first strikes the closer tuning fork, making it vibrate, and then moves on to the second tuning fork. In the meantime, the first tuning fork, now excited, emits sound waves itself, which arrive with a delay at the second fork. Depending on the delay time, this sound either amplifies or dampens the vibrations of the second fork – just like the second push on the oscillating swing, as well as for the case of the excited nuclei.

With this experiment, Jörg Evers, Christoph Keitel, and Thomas Pfeifer and their team from the Max Planck Institute for Nuclear Physics in cooperation with researchers from DESY in Hamburg and the Helmholtz Institute/Friedrich Schiller University in Jena succeeded for the first time in demonstrating coherent control of nuclear excitations. In addition to synchrotron facilities such as those at the ESRF, free-electron lasers (FELs) such as the European XFEL at DESY have recently provided powerful sources of X-ray radiation – even in laser-like quality. This opens up a dynamic future for the emerging field of nuclear quantum optics.