By correlating bright lines within the atomic spectra to audible tones, individual atom notes can be identified to create atom songs, allowing us to ‘see’ their music 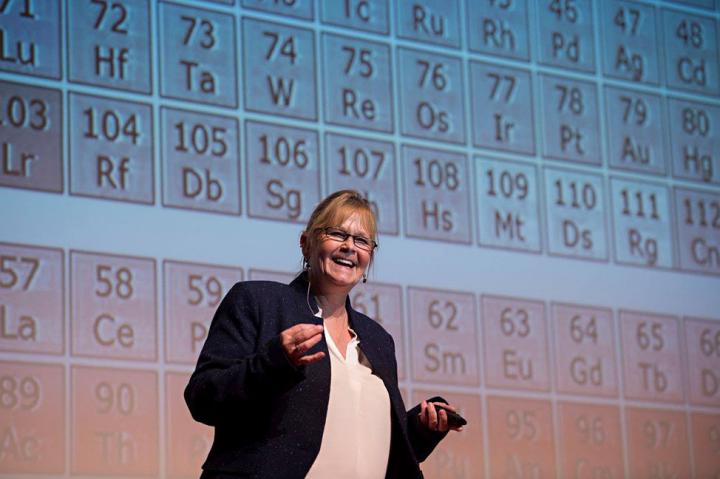 Atoms absorb and release energy in the form of photons that we perceive as different colors — think northern lights. These colors can be passed through a grating or prism that reveals the atom’s individual spectrum as a set of colored lines. The lines are specific to the atom and can be used to identify the element to which it belongs.

During the 178th Meeting of the Acoustical Society of America, held Dec. 2-6, at the Hotel del Coronado in San Diego, Jill Linz, from Skidmore College, will describe how her interpretation of the interconnectedness of sound and light waves led her to create spectral scales.

“The basic premise of music synthesis is that all sound, from a simple octave to white noise, can be produced by simply adding together enough single-frequency sine waves in the right amounts,” said Linz.

Individual sine waves can be organized in a bar chart that represents a Fourier Transform, where each line on the chart is the frequency of an individual tone and the height of the lines is the amplitude (loudness) of the tone. “Think of this chart as a recipe for the sound,” she said.

Each line in the chart represents a different ingredient. The height of the line represents the amount of that ingredient to be used.

“As with cooking, we can use the same basic ingredients to create entirely different dishes by simply adjusting the amounts of ingredients,” Linz said. “To create atom music scales, the ingredients are determined by the scaled frequencies of the atomic spectra.”

The advent of audio synthesis and audio editing programs “made it possible to visualize sound in a way that wasn’t possible before,” said Linz. “It gave us insight into how sounds are produced and manipulated, which changed the way audio is produced and engineered. By using data from atomic spectra, we are now able to gain insight into the atomic world.”

Is the way Linz determined her scales the only way to convert light waves into sound waves? “Not at all, but hopefully others are inspired to investigate the atomic world in a new and exciting way,” she said.

Linz’s presentation 3aMU2, “Atom music: exploring the atomic world through sound,” will be at 9:15 a.m. PT, Wednesday, Dec. 4, in the Coronet room of the Hotel del Coronado in San Diego.

We will grant free registration to credentialed journalists and professional freelance journalists. If you are a reporter and would like to attend, contact the AIP Media Line at 301-209-3090. For urgent requests, staff at [email protected] can also help with setting up interviews and obtaining images, sound clips or background information.

What Exactly Happened at Chernobyl? (video)