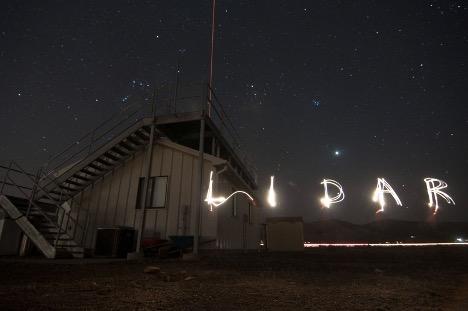 Twice a day, at dusk and just before dawn, a faint layer of sodium and other metals begins sinking down through the atmosphere, about 90 miles high above the city of Boulder, Colorado. The movement was captured by one of the world’s most sensitive “lidar” instruments and reported today in the AGU journal Geophysical Research Letters.

The metals in those layers come originally from rocky material blasting into Earth’s atmosphere from space, and the regularly appearing layers promise to help researchers understand better how earth’s atmosphere interacts with space, even potentially how those interactions help support life.

“This is an important discovery because we have never seen these dusk/dawn features before, and because these metal layers affect many things. The metals can fall into the ocean and act as fertilizer for ecosystems, the ionized metals can affect GPS radio signals,” said Xinzhao Chu, CIRES Fellow, CU Boulder professor of Aerospace Engineering Sciences, and lead author of the new assessment.

It is the first time that the metal layers–which are not harmful to people–have been seen so regularly at these extreme heights in the atmosphere. Such high-altitude metal layers were discovered by Chu’s group just 10 years ago above McMurdo, Antarctica, but there they occur more sporadically. Above Boulder, they’re consistent, daily, and synched with winds that occur high in the atmosphere.

“Consistent daily patterns seen in our Boulder observations tell us that there are unknown processes at play, a golden opportunity for atmospheric scientists,” said Jackson Jandreau who worked alongside Chu and Yingfei Chen in this study. Chen and Jandreau are both PhD students in Chu’s group.

The discovery also gives researchers a window into a crucial part of the atmosphere that is challenging to observe. It’s a complicated region where interactions between the sun, earth and our planet’s magnetic field can end up creating the environmental conditions in which surface life can thrive, protected from the harsh space environment.

“There are metals in the atmospheres of other planetary bodies, such as Mars, and researchers look for Earth-like features on exoplanets as indicators for hospitable environments,” Chu said. “Can these metal layers be one of these features?”

Her team used a powerful atmospheric lidar to detect and measure very small quantities of particles in the high atmosphere. Lidar is similar to radar, but lidar uses photons from a laser, instead of radio waves, to investigate the composition and structure of distant objects. Chu’s group developed the highly sensitive instrument with funding from the National Science Foundation.