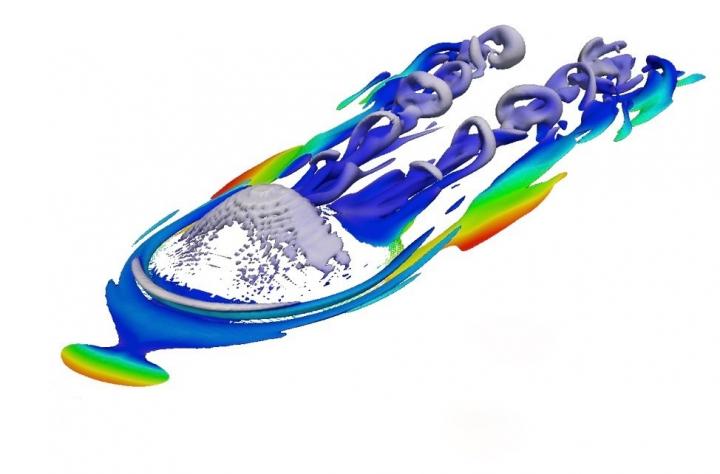 BUFFALO, N.Y. — If you’ve ever been to an air show, or lived near an air force base, you’re familiar with sonic booms.

These deafening noises are created by aircraft exceeding the speed of sound, roughly 767 mph. They explain, in part, why passenger airliners cruise the skies at slower and less auditorily offensive speeds.

Chen is the corresponding author of a study published Jan. 3 in the Journal of Engineering Mathematics. The study pertains to Austrian physicist Ludwig Boltzmann’s classical kinetic theory, which uses the motion of gas molecules to explain everyday phenomena, such as temperature and pressure.

Chen’s work extends classical kinetic theory into high-speed aerodynamics, including hypersonic speed, which begins at 3,836 mph or roughly five times the speed of sound. The new study and others by Chen in influential academic journals attempt to solve long-standing problems associated with high-speed aerodynamics.

The idea of supersonic passenger jets is not new. Perhaps the most famous is the Concorde, which flew from 1976-2003. While successful, it was dogged by noise complaints and expensive operating costs.

“Reduction of the notorious sonic boom is a just a start. In supersonic flight, we must now answer the last unresolved problem in classical physics: turbulence,” says Chen, whose work is funded by the U.S. Air Force’s Young Investigator Program, which supports engineers and scientists who show exceptional ability and promise for conducting basic research.

To create more efficient, less expensive and quieter aircraft that exceed the sound barrier, the research community needs to better understand what is happening with the air surrounding these vehicles.

“There is so much we don’t know about the airflow when you reach hypersonic speeds. For example, eddies form around the aircraft creating turbulence that affect how aircraft maneuver through the atmosphere,” he says.

To solve these complex problems, researchers have historically used wind tunnels, which are research laboratories that replicate the conditions vehicles encounter while in the air or space. While effective, these labs can be expensive to operate and maintain.

As a result, many researchers, including Chen, have pivoted toward direct numerical simulations (DNS).

“DNS with high-performance computing can help resolve turbulence problems. But the equations we have used, based upon the work of Navier and Stokes, are essentially invalid at supersonic and hypersonic speeds,” says Chen.

His work in the Journal of Engineering Mathematics centers on morphing continuum theory (MCT), which is based on the fields of mechanics and kinetic theory. MCT aims to provide researchers with computationally friendly equations and a theory to address problems with hypersonic turbulence.

“The Center for Computational Research at UB provides a perfect platform for my team and me at the Multiscale Computational Physics Lab to pursue these difficult high-speed aerodynamics problems with high-performance computing,” says Chen.

Ultimately, the work could lead to advancements into how supersonic and hypersonic aircraft are designed, everything from the vehicle’s shape to what materials it is made of. The goal, he says, is a new class of aircraft which are faster, quieter, less expensive to operate and safer.

From Stone Age chips to microchips: How tiny tools may have made us human

Thousands of medieval manuscripts now online in full color through…

How hunger makes food tastier: a neural circuit in the hypothalamus