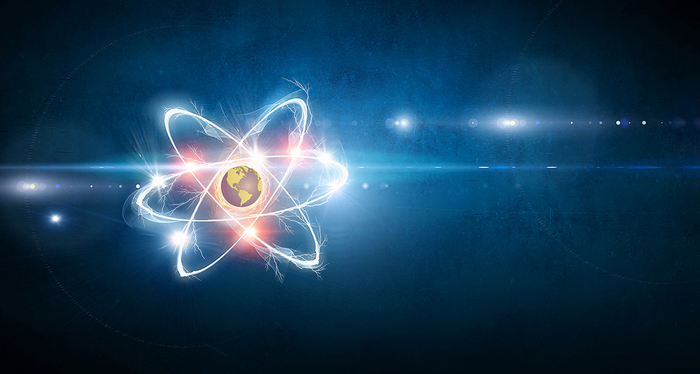 The promise of quantum technology has kicked off an international contest the likes of which have not been seen since the space race, and ASU is joining scores of nations, companies and universities striving to realize its potential. A state-funded and globally oriented initiative, the Quantum Collaborative aims to promote understanding of this important technology and forge partnerships to advance it.

“A key objective for ASU’s Knowledge Enterprise is to fundamentally change how the world solves problems,” says Sally C. Morton, executive vice president of the ASU Knowledge Enterprise. “Quantum technology holds a unique promise to accomplish this, and I am thrilled to see what we can accomplish with our partners in the Quantum Collaborative.”

The Quantum Collaborative is a broad endeavor consisting of a community of companies, academic institutions, startups and initiatives cooperating across several strategic areas to deliver incremental advances across the emerging quantum technology landscape, as well as develop training and education for the future quantum workforce.

Along with industry partnerships, the Quantum Collaborative is forging connections with leading academic institutions. Founding academic partners include:

ASU will also operate as a Hub within the IBM Quantum Network, a global community of Fortune 500 companies, academic institutions, startups and national labs with cloud access to IBM’s premium quantum computers, experts and resources. Organizations can join ASU’s Hub as members to draw on IBM’s quantum technology and resources to advance quantum computing research.

“We’re excited to welcome ASU into the IBM Quantum Network,” says Aparna Prabhakar, vice president, Partner Ecosystem, IBM Quantum. “They’re already building a diverse academic and industry ecosystem, with an academic and workforce program focused on how quantum computing can be applied to key demonstrations of the technology.”

In addition to assembling this collection of universities and companies to cooperate on quantum technology initiatives, the Quantum Collaborative recently joined the Quantum Economic Development Consortium, or QED-C, and is developing relationships with prospective international partners.

From bits to qubits

In the emerging field of quantum technology, one area already transforming society is quantum computing.

Essentially, quantum computing is a marriage between computing and quantum theory — a branch of physics that focuses on the behavior of atoms and the subatomic particles within them.

Traditional computers — be it your laptop, cell phone or high-performance supercomputers — operate using binary digits, or bits. Bits have only two possible values, one or zero. They make up binary code, which your computer reads to carry out its tasks.

Conversely, quantum computers use quantum bits, or qubits, to process information. Qubits can exist not only as a one or a zero, but also as both a one and a zero simultaneously. Together with other quantum mechanical features, this behavior allows quantum computers to run certain computations much faster than any classical computer.

Quantum computing is just one aspect of a field known more formally as Quantum Information Science and Technology, or QIST, which stands to revolutionize many areas of industry such as pharmaceutical development, finance, telecommunications, artificial intelligence and cybersecurity.

“There are few organizations engaging across all QIST areas simultaneously, because each individual area is advancing so quickly and focused on individual goals,” says Sean Dudley, assistant vice president and chief research information officer of ASU’s Knowledge Enterprise. Dudley oversees the Quantum Collaborative with support from internal and external advisory boards.

“We’ve found that groups working in specific areas of QIST struggle to keep tabs on advancements across other areas even when co-dependencies are in the mix,” says Dudley. “For example, quantum sensing is already reaching the market. It can deliver tremendous advancements in areas such as human health or climate science and can also be integrated with both quantum computing and networking, which are different yet complementary technologies, to bring further advancements.”

The Quantum Collaborative solves for this silo effect by aligning research and development efforts where appropriate to create joint initiatives and mechanisms for knowledge exchange. In addition, by creating certifications, upskilling opportunities and modified degree programs, the collaborative aims to develop a robust talent pipeline for a quantum-enabled economy.

While the potential of quantum technology remains unrealized, the field has already attracted worldwide talent and leading researchers to advance it. Christian Arenz believes that the true impact of quantum technology is very hard to foresee. Arenz is an assistant professor in the School of Electrical, Computer and Energy Engineering in the Ira A. Fulton Schools of Engineering and serves on the ASU faculty advisory board for the Quantum Collaborative.

He imagines quantum computers may initially fulfill a role of today’s supercomputers — tackling large scale problems beyond the scope of standard computing, such as simulating complex systems.

“As a physicist, I care about actually being able to simulate complex systems, but who cares about that besides physicists, right?” he asks. “But — you can often map the simulation of complex systems to real-life problems.”

Simulation could pave the way for stronger and more resilient materials, more effective pharmaceuticals as well as better predictive modeling of financial market and weather patterns. A quantum computer could also theoretically reveal how pathogens spread through the air.

At a global level, the race for quantum supremacy is a serious competition with many nations racing to advance QIST. This competition has become more intense partly due to quantum’s anticipated disruption of data privacy and encryption.

“Take 15 — you can easily factor that into primes. Three times five is 15,” says Arenz. “That becomes much harder when dealing with very large numbers, and most encryption protocols are based exactly on the fact that a classic computer cannot efficiently factor a large number into prime numbers.”

This encryption method leaves hackers two options to decipher secure information: either intercept a key or use powerful computers to predict the key. The latter isn’t currently feasible, but the massive jump in computing power promised by quantum computers is expected to deliver rapid and easy decryption.

This has led to a “harvest now, decrypt later” mindset in which bad actors capture troves of data, anticipating the ability to decrypt it later. It’s a bit like a thief stealing a near-uncrackable safe full of valuables with the assumption that they’ll eventually learn how to open it.

In recognition of this threat, governments and intelligence agencies around the world are working quickly to achieve post-quantum cryptography to safeguard data from powerful quantum computers. In 2016, the U.S. National Institute of Standards and Technology launched a global effort to standardize post-quantum cryptography protocols to secure data against quantum computers and maintain functionality with existing systems and networks. NIST announced the first four standards in July 2022, and additional standards are currently under review.

Beyond encryption, there is broad federal interest in quantum technology. In 2018, the U.S. founded the National Quantum Initiative to propel the United States’ strategic advancement in quantum technology overall. New funding programs, established by the National Science Foundation and Department of Energy, bolster quantum research and development. The recently passed CHIPS and Science Act delivers hundreds of millions in additional funding for QIST.

“This is a national competition, for a global advantage. We can’t afford to have siloed efforts throughout the country and our partner nations. The winner of the quantum race will gain an 80-year advantage — the outcomes are going to be that transformative,” Dudley says.

In addition to fundamental research and technology development, another key aim of the Quantum Collaborative is workforce and education program development, a goal that ASU and other academic partners are well-positioned to achieve.

With the largest engineering school in the nation, ASU is also mobilizing significant resources to address a widespread need for quantum workforce development across many skill areas such as engineering, chemistry, materials science, human performance, communications and manufacturing.

“Academic and workforce program development is a federal interest and is as yet a relatively unmet call to action from the National Quantum Initiative,” says Dudley.

For Arenz, his primary goal is to introduce students of all disciplines to paradigms in quantum technology. Because, he says, fundamentally we need people who can build and improve these solutions. Then and only then can we develop a workforce around this new technology.

“More or less, everyone can take a software class and code a little bit on their laptop right at home,” he says. “Quantum computing is not like that at this point. The goal is to get there, but at this point, we need to understand how to scale the quantum computer up, how to make it better.”

Arenz bases this on his experience teaching a quantum computing course. His students come from several disciplines, each looking at problems very differently.

“It’s not just physics. It’s engineering, it’s computer science, it’s math — and then if you then think about applications — simulating chemistry, well you need chemists. For something like optimization, you need engineers,” he says.

To fully realize the potential of quantum technology, everyone from executive leaders and specialized technicians to entry-level engineers and researchers far outside computing and physics will need education tailored to their needs and interests. One goal of the Quantum Collaborative is to demonstrate that quantum technology is a skill area within reach that has potential to create economic mobility for many people.

“When I was growing up in a small manufacturing town in Wisconsin, people were excited about the opportunity offered by a radiology certification. It was two years of learning and then you could make great money without having to follow the previous generation into a factory,” says Dudley. “While the manufacturing industry certainly took great care of many families in the Midwest, radiology brought hope as something that might lift you up and out of a limited professional destiny. We at ASU, with our many partners, will deliver what the National Quantum Initiative calls for by working within and outside STEM-engaged populations to bring a new set of professional opportunities to families across all communities.”