Astronomers successfully obtain first ever image of a black hole 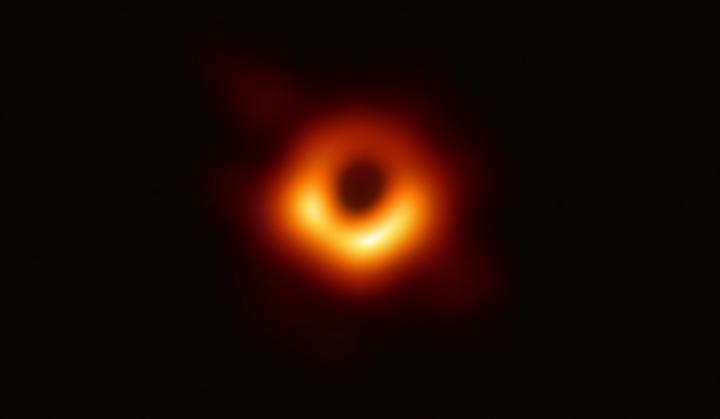 The very first image of a black hole has been obtained by the Event Horizon Telescope (EHT), a network of eight radio telescopes on four different continents designed for this purpose.

Black holes are extremely dense cosmic objects. Their gravitational attraction is so strong that nothing, neither matter nor light, can escape from them. Despite their huge mass and tremendous impact on their environment, black holes are very small bodies, making them particularly difficult to detect. However, due to its exceptional mass and relative proximity to Earth (‘only’ 55 million light years away from us), the black hole at the centre of the M87 galaxy was a perfect target for the EHT.

In 2017, the network connected eight observatories on four continents for the first time. Using an interferometry technique that makes use of the rotation of our planet, it forms a huge virtual telescope with a theoretical aperture the size of the diameter of the Earth. This required extremely precise synchronization of the eight radio telescopes, using high-precision atomic clocks. This technique enabled the EHT to achieve a sensitivity and spatial resolution (20 microarcseconds) never previously achieved: it would enable someone in Paris to read a newspaper located in New York! The black hole was observed by the EHT on April 5, 6, 10 and 11, 2017. Around four petabytes of data were recorded, which were then processed by dedicated supercomputers in Bonn (Germany) and Haystack (United States).

The Institut de Radioastronomie Millimétrique (IRAM), founded in 1979 by the CNRS and the Max-Planck-Gesellschaft (MPG, Germany)1, played a key role in this result via its 30-metre telescope, located near Granada (Spain). This is the most sensitive single antenna in the EHT network and the only observatory in Europe to participate in the 2017 observation campaign: without it, it would have been impossible to obtain this first image of a black hole.

The image published today clearly shows a ring-like structure with a dark, circular central region: this is the shadow of the black hole standing out against a bright background, exactly as predicted by Einstein’s general theory of relativity. The shadow, caused by the gravitational bending of light, provides a huge amount of information about the nature of these fascinating objects, and enabled the researchers to measure the black hole’s enormous mass: 6.5 billion times that of our Sun, located in a region 20 billion kilometres across, approximately twice the size of our Solar System.

The orange halo is made up of superheated matter, hot gas and plasma, that surrounds the black hole. Its light is deflected and intensified by the black hole, which acts like a lens. The asymmetry between the bright area at the bottom of the ring and the less bright region at the top is a clear signature of the deformation of the image caused by the presence of the black hole, and corresponds exactly to the predictions of the scientists’ numerical simulations.

Research institutions as well as European funding have played a decisive role in this global project, thanks to the participation of leading European telescopes and the support of the European Research Council (ERC) for the BlackHoleCam project, which received €14 million in European funding. In addition to IRAM, France also contributed to the EHT with the ALMA Observatory in Chile, in which it participates as a member of the ESO.

At the end of 2018, NOEMA, IRAM’s second observatory, located on the Plateau de Bure in the French Alps, joined the EHT network. Its ten extremely sensitive antennas make it the network’s most powerful telescope in the northern hemisphere. Two new antennas will be added in two years’ time. IRAM’s NOEMA facility will further enhance the EHT network’s sensitivity and the quality of the images it will provide over the next few years.

The image of the black hole in the M87 galaxy, in high definition: https://cloud.iram.fr/index.php/s/Jis7m2ay1r4Sn9m

Photographs of the NOEMA observatory:
https://cloud.iram.fr/index.php/s/kf6nLbXQtwBSGEK

Footnotes:
(1) joined in 1990 by the Instituto Geográfico Nacional (IGN, Spain)

104th Annual Meeting of the Ecological Society of America convenes in Louisville, Kentucky

The chemistry behind black powder (video)