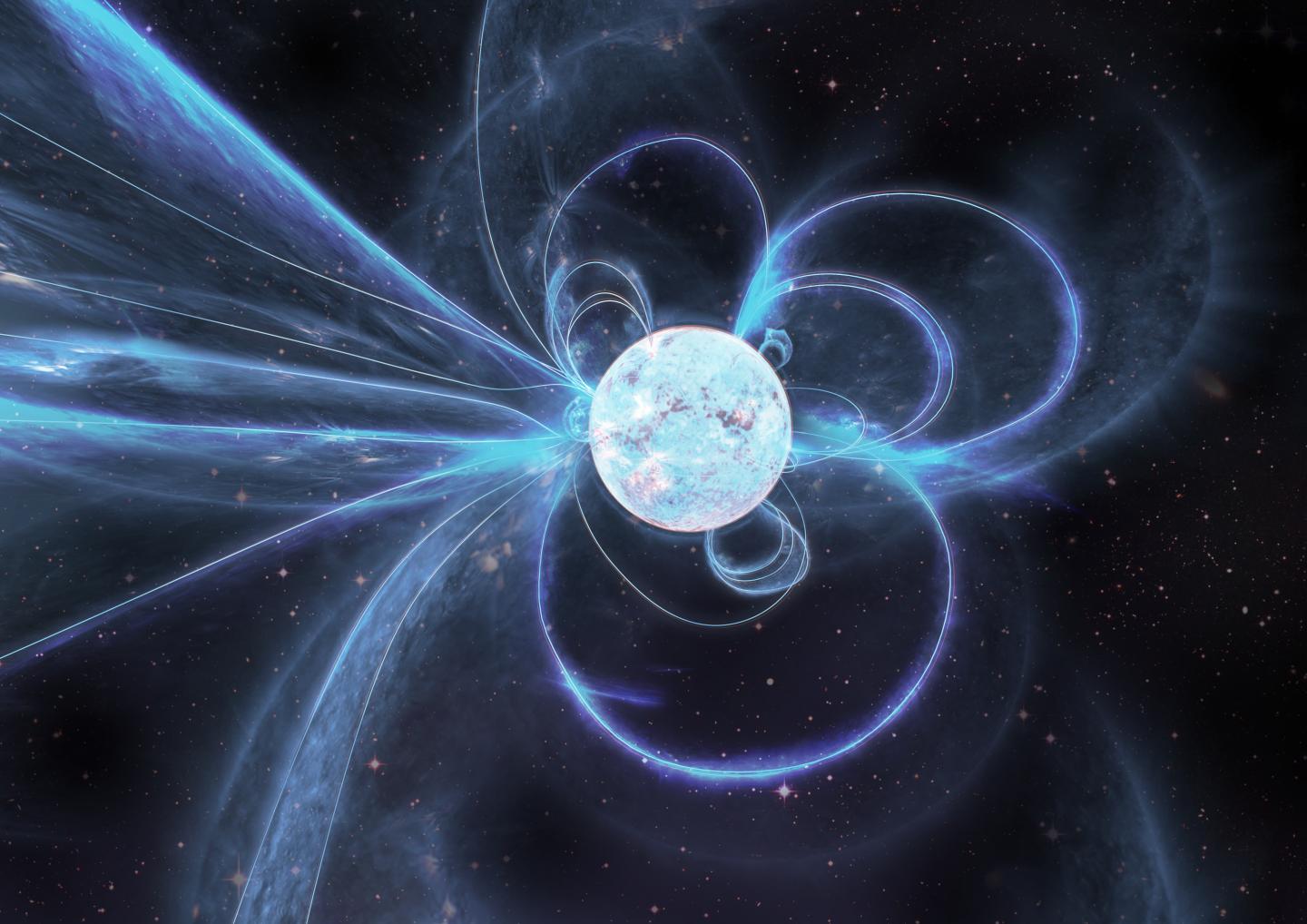 Astronomers from the ARC Centre of Excellence for Gravitational Wave Discovery (OzGrav) and CSIRO have just observed bizarre, never-seen-before behaviour from a ‘radio-loud’ magnetar–a rare type of neutron star and one of the strongest magnets in the Universe.

Their new findings, published today in the Monthly Notices of the Royal Astronomical Society (MNRAS), suggest magnetars have more complex magnetic fields than previously thought – which may challenge theories of how they are born and evolve over time.

Magnetars are a rare type of rotating neutron star with some of the most powerful magnetic fields in the Universe. Astronomers have detected only thirty of these objects in and around the Milky Way–most of them detected by X-ray telescopes following a high-energy outburst.

However, a handful of these magnetars have also been seen to emit radio pulses similar to pulsars–the less magnetic cousins of magnetars that produce beams of radio waves from their magnetic poles. Tracking how the pulses from these ‘radio-loud’ magnetars change over time offers a unique window into their evolution and geometry.

In March 2020, a new magnetar named Swift J1818.0-1607 (J1818 for short) was discovered after it emitted a bright X-ray burst. Rapid follow-up observations detected radio pulses originating from the magnetar. Curiously, the appearance of the radio pulses from J1818 were quite different to those seen from other radio-loud magnetars.

Most radio pulses from magnetars maintain a consistent brightness across a wide range of observing frequencies. However, the pulses from J1818 were much brighter at low frequencies than high frequencies – similar to what is seen in pulsars, another more common type of radio-emitting neutron star.

In order to better understand how J1818 would evolve over time, a team led by scientists from the ARC Centre of Excellence for Gravitational Wave Discovery (OzGrav) observed it eight times using the CSIRO Parkes radio telescope (also known as Murriyang) between May and October 2020.

During this time, they found the magnetar underwent a brief identity crisis: in May it was still emitting the unusual pulsar-like pulses that had been detected previously; however, by June it had started flickering between a bright and a weak state. This flickering behaviour reached a peak in July where they saw it flicking back and forth between emitting pulsar-like and magnetar-like radio pulses.

“This bizarre behaviour has never been seen before in any other radio-loud magnetar,” explains study lead author and Swinburne University/CSIRO PhD student Marcus Lower. “It appears to have only been a short-lived phenomenon as by our next observation it had settled permanently into this new magnetar-like state.”

The scientists also looked for pulse shape and brightness changes at different radio frequencies and compared their observations to a 50-year-old theoretical model. This model predicts the expected geometry of a pulsar, based on the twisting direction of its polarised light.

“From our observations, we found that the magnetic axis of J1818 isn’t aligned with its rotation axis,” says Lower.

“Instead, the radio-emitting magnetic pole appears to be in its southern hemisphere, located just below the equator. Most other magnetars have magnetic fields that are aligned with their spin axes or are a little ambiguous.”

“This is the first time we have definitively seen a magnetar with a misaligned magnetic pole.”

Remarkably, this magnetic geometry appears to be stable over most observations. This suggests any changes in the pulse profile are simply due to variations in the height the radio pulses are emitted above the neutron star surface. However, the August 1st 2020 observation stands out as a curious exception.

“Our best geometric model for this date suggests that the radio beam briefly flipped over to a completely different magnetic pole located in the northern hemisphere of the magnetar,” says Lower.

A distinct lack of any changes in the magnetar’s pulse profile shape indicate the same magnetic field lines that trigger the ‘normal’ radio pulses must also be responsible for the pulses seen from the other magnetic pole.

The study suggests this is evidence that the radio pulses from J1818 originate from loops of magnetic field lines connecting two closely spaced poles, like those seen connecting the two poles of a horseshoe magnet or sunspots on the Sun. This is unlike most ordinary neutron stars which are expected to have north and south poles on opposite sides of the star that are connected by a donut-shaped magnetic field.

This peculiar magnetic field configuration is also supported by an independent study of the X-rays pulses from J1818 that were detected by the NICER telescope on board the International Space Station. The X-rays appear to come from either a single distorted region of magnetic field lines that emerge from the magnetar surface or two smaller, but closely spaced, regions.

These discoveries have potential implications for computer simulations of how magnetars are born and evolve over long periods of time, as more complex magnetic field geometries will change how quickly their magnetic fields are expected to decay over time. Additionally, theories that suggest fast radio bursts can originate from magnetars will have to account for radio pulses potentially originating from multiple active sites within their magnetic fields.

Catching a flip between magnetic poles in action could also afford the first opportunity to map the magnetic field of a magnetar.

“The Parkes telescope will be watching the magnetar closely over the next year” says scientist and study co-author Simon Johnston, from the CSIRO Astronomy and Space Science.