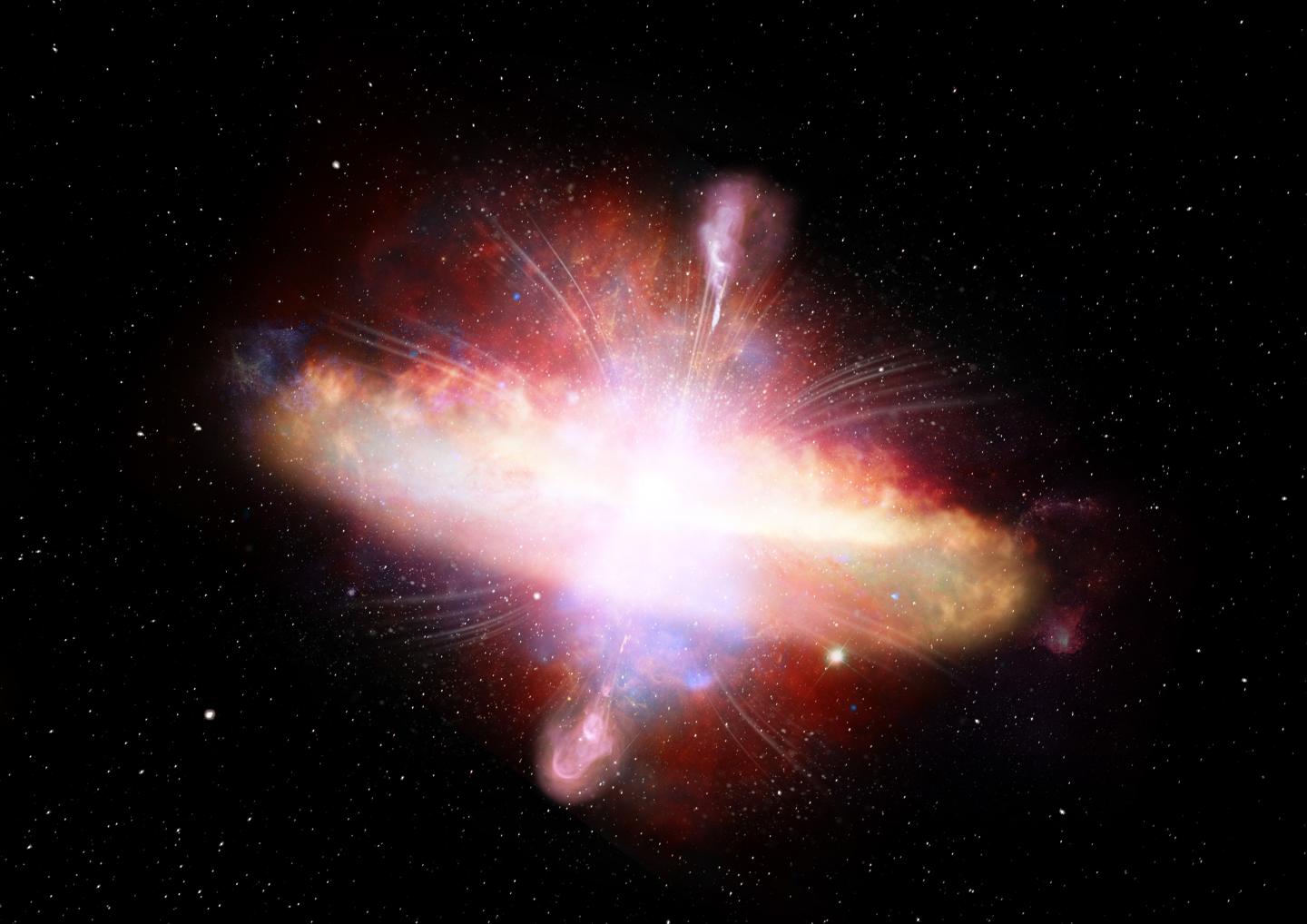 Astronomers have identified a rare moment in the life of some of the universe’s most energetic objects.

Quasars were first observed 60 years ago, but their origins still remain a mystery.

Now researchers at Durham University, UK, have spotted what they suggest is a “brief transition phase” in the development of these galactic giants that could shed light on how quasars and their host galaxies evolve.

The research is published in Monthly Notices of the Royal Astronomical Society.

Quasars are powered by the energy from supermassive black holes at their centres as they feed on surrounding gases.

They are thousands of times brighter than galaxies like our Milky Way and the majority are blue in colour.

However, a significant number are red as they are viewed through huge clouds of dust and gas that obscure them from view.

The conventional view of red quasars is that they are actually blue quasars that are angled away from our line-of-sight.

Instead, the Durham team has ruled this model out and have shown that red quasars are like-ly to be the result of a brief, but violent, phase in the evolution of galaxies when the black hole ejects a large amount of energy into the surrounding clouds of dust and gas.

This injection of energy blows away the dust and gas to reveal a blue quasar.

Observations using radio telescopes support this theory by showing that black holes at the centre of red quasars produce a greater amount of radio emission than those at the centre of blue quasars.

Lead author Lizelke Klindt, a PhD researcher in Durham University’s Centre for Extragalactic Astronomy, said: “How quasars develop has been the cause of significant uncertainty.

“What our results suggest is that quasars undergo a brief transition phase, changing colour from red to blue, when they emerge from the deep shroud of dust and gas surrounding them.

“What we believe we are seeing is a rare but important step in the life of these galactic beasts during galaxy evolution when their black holes are starting to shape their environments.”

The researchers studied 10,000 red and blue quasars as they would have been seen seven to 11 billion years ago when the universe was relatively young using archival data from the Sloan Digital Sky Survey and the Very Large Array radio astronomy observatory.

They say their research could also tell us more about galaxy evolution.

Co-author Professor David Alexander, Head of Astronomy, at Durham University, said: “We expect that during this transition phase the energy from the supermassive black hole will burn off the gas needed to form stars.

“Without the gas the galaxy cannot continue to grow, so what we are possibly seeing is the start of a quasar effectively ending the life of the galaxy by destroying the very thing it needs to survive.”

The researchers say the next step in their research is to use more in-depth data to understand the finer details of this transition phase.

The research was funded by a Faculty of Science Durham Doctoral Scholarship, the Science and Technology Facilities Council, a European Union COFUND/Durham Junior Research Fel-lowship and the Swiss National Science Foundation.

Scienmag Apr 3, 2019
The new technology is focused on improving detection and diagnosis of congenital heart disease in infants and…