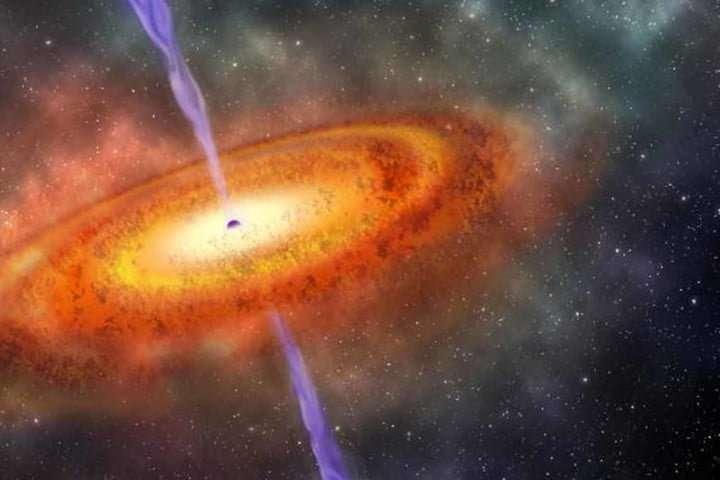 Until recently, quasars were thought to have essentially fixed positions in the sky. While near-Earth objects move along complex trajectories, quasars are so remote that they were believed to offer stable and reliable reference points for use in navigation and plate tectonics research. Now, an international team of astrophysicists featuring researchers from the Moscow Institute of Physics and Technology has found that quasars are not entirely motionless and explained this behavior. The findings were published in the Monthly Notices of the Royal Astronomical Society.

“The apparent positions of quasars change with the radiation frequency used to observe them. Researchers predicted this effect about 40 years ago based on the theory of synchrotron radiation and observed it soon afterwards,” explains Alexander Pushkarev, a leading researcher at the Crimean Astrophysical Observatory and Lebedev Physical Institute of the Russian Academy of Sciences. “Our study aimed to find whether this effect varies with time, and if so, then on what timescales and to what extent the apparent position shift changes.”

Quasars belong to a broader class of astronomical objects known as active galactic nuclei. Fortunately, none of them are located close to Earth. An AGN is basically a “fire-breathing” black hole incinerating its surroundings with two oppositely directed jets of plasma moving at relativistic speeds. Lurking at the heart of an AGN, the black hole itself is, naturally, invisible. This central object is shrouded with a region penetrable only to the highest-frequency radiation. As a result, an Earth-based observer sees an AGN differently depending on the radiation frequency used. For example, while optical observations reveal the jet and the glow around its source, radio telescopes can only discern the part of the quasar “tail” directed at us.

The most precise currently available technique for radio observation of remote objects is known as very long baseline interferometry. It relies on an emulated giant telescope that draws on many regular instruments scattered across the globe. Such a “virtual” telescope can obtain high-resolution data about a remote radio source. However, data reduction and restoring “a photo” of the target is not a trivial thing, because researchers need to retrieve an image from the bits of information gathered by many instruments.

The team developed an automated procedure for solving that task. They found that the apparent coordinate of the jet apex does not remain static but fluctuates back-and-forth along the axis of the jet. It would appear that the source itself “wiggles.” However, astrophysicists consider these fluctuations to be a sort of an illusion. They explain the phenomenon in terms of the complex nature of radiation. This implies that the quasar nuclei themselves do not actually undergo any motion in space.

“Back in the 20th century, a theory explained the apparent behavior of quasars in terms of fast-electron radiation. But this model does not explain how this radiation can vary,” said Alexander Plavin, a researcher at MIPT’s Laboratory of Fundamental and Applied Research of Relativistic Objects of the Universe and a doctoral student at Lebedev Physical Institute, RAS. “Until recently, it was more convenient to simply ignore this variability. AGNs were assumed to be positionally static for practical purposes. But we accumulated enough data and developed an efficient and accurate method for their automated processing. This enabled us to detect position variability and interpret it in terms of the jets’ internal physics.”

What could be the reason behind this phenomenon? To answer this question, the authors checked the apparent AGN positions for potential correlations with some of the variable quasar parameters, such as their brightness or magnetic fields. It turned out that the apparent coordinates of an active galactic nucleus are directly associated with the particle density in the jet: the higher the brightness, the more pronounced the perceived position shift. This could complement theoretical quasar models by indicating the role of nuclear flares injecting higher-density plasma into the outflow.

There is a practical dimension to this analysis as well. New precise data on the apparent shifts of quasar positions will enable a correction of astrometry techniques, leading to the most accurate navigation systems that ever existed in human history.

The study was supported by the Russian Science Foundation.

Scienmag Apr 11, 2019
Credit: CNIO When the surgeon surgically removes a melanoma, some patients are said to be 'cancer-free' and…