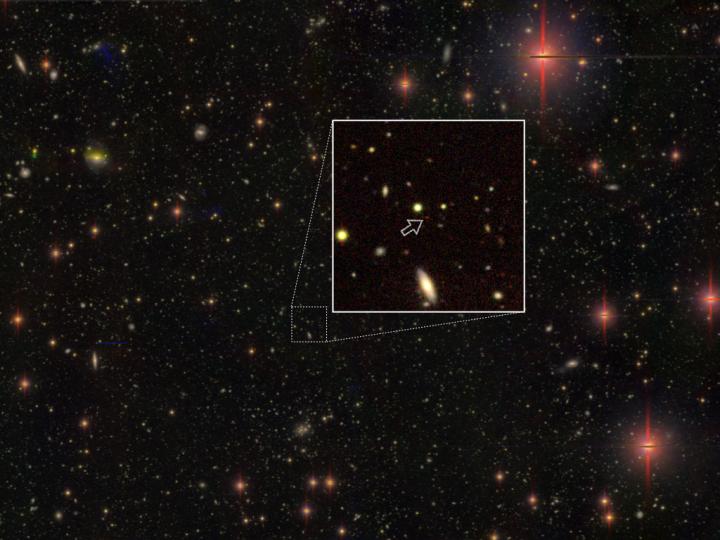 A team of astronomers has discovered 83 quasars powered by supermassive black holes (SMBHs) in the early Universe. This increases the number of black holes known at that epoch considerably, and reveals, for the first time, how common SMBHs were early in the Universe’s history.

Supermassive black holes are found at the centers of galaxies, and have masses millions or even billions of times that of the Sun. While they are prevalent in the modern Universe, it is unclear when they first formed, and how many existed in the early Universe. We cannot observe black holes directly, but when a large quantity of matter falls into a SMBH it releases energy as a bright light that can be seen from across the Universe. This phenomenon is known as a quasar.

The research team led by Yoshiki Matsuoka (Ehime University) used the Subaru Telescope to look for quasars in the distant Universe. The most distant quasar discovered by the team is 13.05 billion light-years away, which is tied for the second most distant SMBH ever discovered. Because of the finite speed of light, the light emitted from these objects located 13 billion light-years away must have traveled for 13 billion years to reach us. Thus, the light provides an image of how things looked when it was emitted 13 billion years ago, when the Universe was only five percent of its current age. The survey revealed 83 previously unknown very distant quasars; together with the 17 quasars already known in the survey region. Previous studies have been sensitive only to the most luminous quasars, and thus the most massive black holes. The new discoveries probe the population of SMBH with masses characteristic of the most common ones seen in the modern Universe, and thus shed light on their origin. The survey has found that the average spacing between supermassive black holes is a billion light-years.

“The quasars we discovered will be an interesting subject for further follow-up observations with current and future facilities,” said Matsuoka. “We will also learn about the formation and early evolution of SMBHs, by comparing the measured number density and luminosity distribution with predictions from theoretical models.”

A gold butterfly can make its own semiconductor skin

UV light may illuminate improvements for next generation electronic…