Asteroid that hit Botswana in 2018 likely came from Vesta

An international team of researchers searched for pieces of a small asteroid tracked in space and then observed to impact Botswana on June 2, 2018. 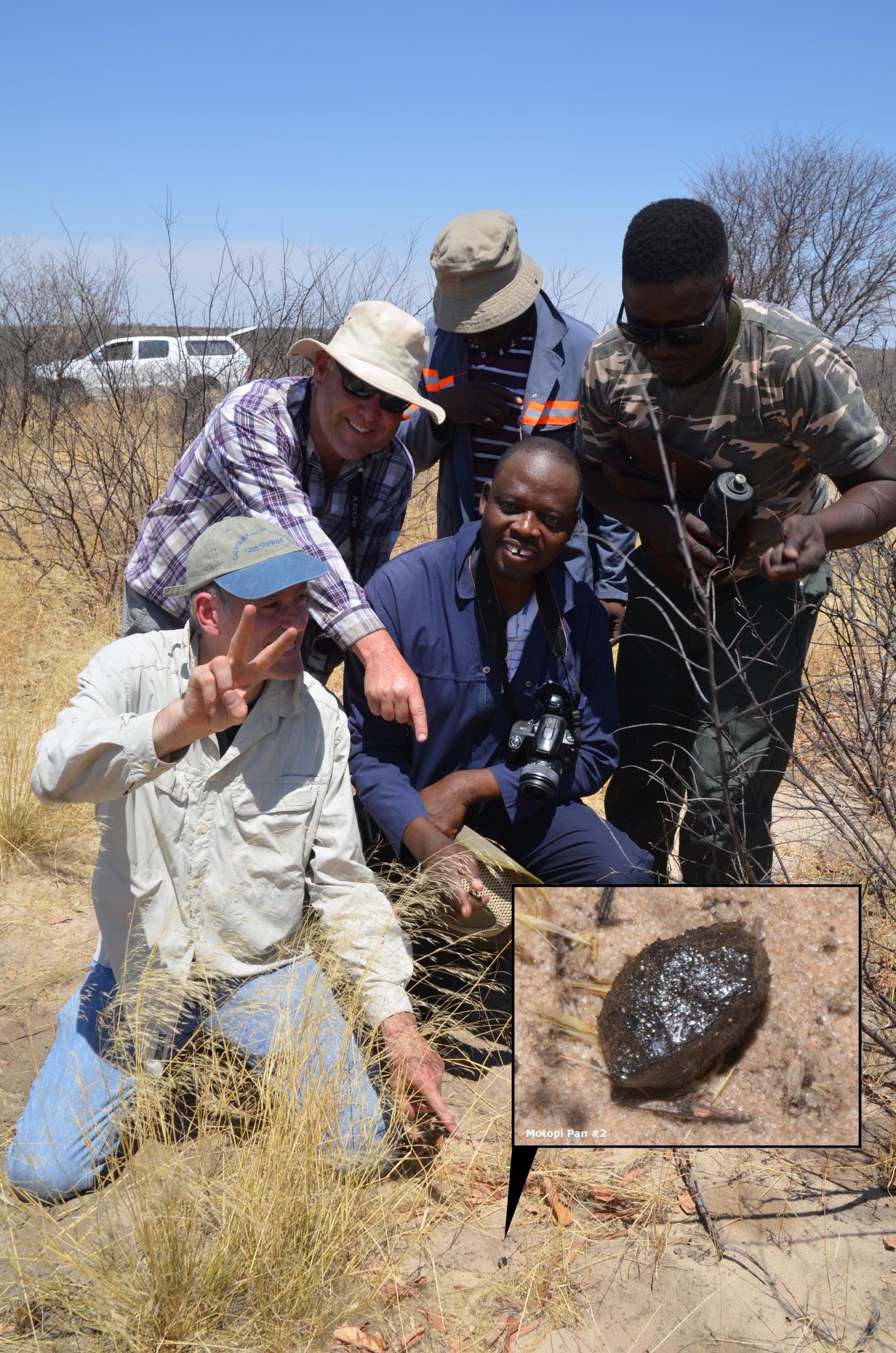 April 23, 2021, Mountain View, CA — An international team of researchers searched for pieces of a small asteroid tracked in space and then observed to impact Botswana on June 2, 2018. Guided by SETI Institute meteor astronomer Peter Jenniskens, they found 23 meteorites deep inside the Central Kalahari Game Reserve and now have published their findings online in the journal Meteoritics and Planetary Science.

“Combining the observations of the small asteroid in space with information gleaned from the meteorites shows it likely came from Vesta, second largest asteroid in our Solar System and target of NASA’s DAWN mission,” said Jenniskens. “Billions of years ago, two giant impacts on Vesta created a family of larger, more dangerous asteroids. The newly recovered meteorites gave us a clue on when those impacts might have happened.”

The small asteroid that impacted Botswana, called 2018 LA, was first spotted by the University of Arizona’s Catalina Sky Survey as a faint point of light moving among the stars. The Catalina Sky Survey searches for Earth-crossing asteroids as part of NASA’s Planetary Defense program.

“Small meter-sized asteroids are no danger to us, but they hone our skills in detecting approaching asteroids,” said Eric Christensen, director of the Catalina Sky Survey program.

The team recovered archival data from the SkyMapper Southern Survey program in Australia that showed the asteroid spinning in space, rotating once every 4 minutes, alternatingly presenting a broad and a narrow side to us while reflecting the sunlight.

On its journey to Earth, cosmic rays bombarded the asteroid and created radioactive isotopes. By analyzing those isotopes, the researchers determined that 2018 LA was a solid rock about 1.5 m in size, which reflected about 25% of sunlight.

“This is only the second time we have spotted an asteroid in space before it hit Earth over land,” said Jenniskens. “The first was asteroid 2008 TC3 in Sudan ten years earlier.” Jenniskens also guided the search for fragments of 2008 TC3.

This time, fewer observations led to more uncertainty in the asteroid’s position in its orbit. Davide Farnocchia of NASA JPL’s Center for Near-Earth Object Studies combined astronomical observations of the asteroid with US Government Satellite data of the fireball to calculate the fall area. Esko Lyytinen of the Ursa Finnish Fireball Network made a parallel effort.

“When Jenniskens first arrived in Maun, he needed our help narrowing down the fall area,” says Oliver Moses of the Okavango Research Institute. “We subsequently tracked down more video records in Rakops and Maun and were able to triangulate the position of the fireball.”

After confirming the fall area, Moses and Jenniskens joined geologist Alexander Proyer of the Botswana International University of Science and Technology (BIUST) in Palapye and geoscientist Mohutsiwa Gabadirwe of the Botswana Geoscience Institute (BGI) in Lobatse and their colleagues to search for the meteorites.

“On the fifth day, our last day of searching, Lesedi Seitshiro of BIUST found the first meteorite only 30 meters from camp,” said Jenniskens. “It was 18 grams and about 3 cm in size.”

The search area was in the Central Kalahari Game Reserve, home to diverse wildlife, including leopards and lions. Researchers were kept safe by the staff of the Botswana Department of Wildlife and National Parks. BGI coordinated the search with the Department of National Museum and Monuments in Botswana.

“The meteorite is named ‘Motopi Pan’ after a local watering hole,” said Gabadirwe, now the curator of this rare sample of an asteroid observed in space before impacting Earth. “This meteorite is a national treasure of Botswana.”

Non-destructive analysis at the University of Helsinki, Finland, showed that Motopi Pan belongs to the group of Howardite-Eucrite-Diogenite (HED) meteorites, known to have likely originated from the giant asteroid Vesta, which was recently studied in detail by NASA’s DAWN mission.

“We managed to measure metal content as well as secure a reflectance spectrum and X-ray elemental analysis from a thinly crusted part of the exposed meteorite interior,” said Tomas Kohout of the University of Helsinki. “All the measurements added well together and pointed to values typical for HED type meteorites.”

Dynamical studies show that the orbit of 2018 LA is consistent with an origin from the inner part of the asteroid belt where Vesta is located. The asteroid was delivered into an Earth-impacting orbit via the resonance situated in the asteroid belt’s inner side.

“Another HED meteorite fall we investigated in Turkey in 2015, called Sariçiçek, impacted on a similarly short orbit and produced mostly smallish 2 to 5-gram meteorites,” said Jenniskens.

When Jenniskens returned to Botswana in October of 2018, the team found 22 more small meteorites. Gabadirwe was the first to spot another out-of-this-world rock. Surprisingly, subsequent meteorite finds showed a lot of diversity in their outward appearance.

“We studied the petrography and mineral chemistry of five of these meteorites and confirmed that they belong to the HED group,” said Roger Gibson of Witts University in Johannesburg, South Africa. “Overall, we classified the material that asteroid 2018 LA contained as being Howardite, but some individual fragments had more affinity to Diogenites and Eucrites.”

Other studies also confirmed the surprising diversity of the team’s finds, such as reflection spectroscopy and the content of polyaromatic hydrocarbons in the sample. The asteroid was a breccia, a mixture of cemented rock pieces from different parts on Vesta.

Origin of the meteorites

A previous hypothesis proposed that Sariçiçek originated from Vesta in the collision that created the Antonia impact crater imaged by DAWN. Still showing a visible ejecta blanket, that young crater was formed about 22 million years ago. One-third of all HED meteorites that fall on Earth were ejected 22 million years ago. Did Motopi Pan originate from the same crater?

“Noble gas isotopes measurements at ETH in Zürich, Switzerland, and radioactive isotopes measured at Purdue University showed that this meteorite too had been in space as a small object for about 23 million years,” said Kees Welten of UC Berkeley, “but give or take 4 million years, so it could be from the same source crater on Vesta.”

Researchers found Motopi Pan and Sariçiçek to be similar in some ways but different in others. Like Motopi Pan, Sariçiçek exploded at 27.8 km altitude, but produced less light in that breakup.

“The infrasound shockwave measured in South Africa was not as strong as expected from US Government sensor detections of the bright light,” said Peter Brown of the University of Western Ontario, Canada.

From lead isotopes in zircon minerals, researchers found that both Sariçiçek and Motopi Pan solidified at Vesta’s surface about 4563 million years ago. But phosphate grains in Motopi Pan experienced another melting event more recently. Sariçiçek did not.

“About 4234 million years ago, the material in Motopi Pan was close to the center of a large impact event,” said Qing-zhu Yin of UC Davis, “Sariçiçek was not.”

“We now suspect that Motopi Pan was heated by the Veneneia impact, while the subsequent Rheasilvia impact scattered this material around,” said Jenniskens. ” If so, that would date the Veneneia impact to about 4234 million years ago. On top of Rheasilvia impact ejecta is the 10.3-km diameter Rubria impact crater, slightly smaller than the 16.7-km Antonia crater, and slightly younger at 19 +/- 3 million years, but a good candidate for the origin crater of Motopi Pan.”

In November 2020, an expedition led by Fulvio Franchi from BIUST discovered one more Motopi Pan meteorite. This 92-gram meteorite is now the largest fragment of asteroid 2018 LA recovered to date and another small piece of the giant asteroid Vesta.

The manuscript is available at:
https://onlinelibrary.wiley.com/journal/19455100

Link to pdf of poster:

About the SETI Institute

Founded in 1984, the SETI Institute is a non-profit, multi-disciplinary research and education organization whose mission is to lead humanity’s quest to understand the origins and prevalence of life and intelligence in the Universe and to share that knowledge with the world. Our research encompasses the physical and biological sciences and leverages expertise in data analytics, machine learning and advanced signal detection technologies. The SETI Institute is a distinguished research partner for industry, academia and government agencies, including NASA and NSF.