Asteroid findings from specks of space dust could save the planet

Curtin University-led research into the durability and age of an ancient asteroid made of rocky rubble and dust, revealed significant findings that could contribute to potentially saving the planet if one ever hurtled toward Earth. 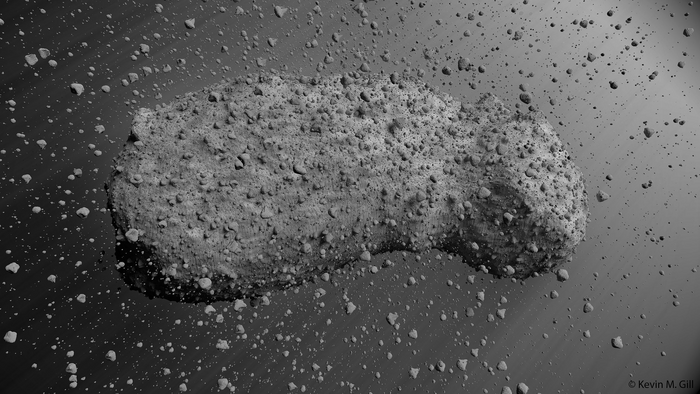 Curtin University-led research into the durability and age of an ancient asteroid made of rocky rubble and dust, revealed significant findings that could contribute to potentially saving the planet if one ever hurtled toward Earth.

The study’s results showed asteroid Itokawa, which is 2 million kilometres from Earth and around the size of Sydney Harbour Bridge, was hard to destroy and resistant to collision.

Lead author Professor Fred Jourdan, Director of the Western Australian Argon Isotope Facility, part of the John de Laeter Centre and the School of Earth and Planetary Sciences at Curtin, said the team also found Itokawa is almost as old as the solar system itself.

“Unlike monolithic asteroids, Itokawa is not a single lump of rock, but belongs to the rubble pile family which means it’s entirely made of loose boulders and rocks, with almost half of it being empty space,” Professor Jourdan said.

“The survival time of monolithic asteroids the size of Itokawa is predicted to be only several hundreds of thousands of years in the asteroid belt.

“The huge impact that destroyed Itokawa’s monolithic parent asteroid and formed Itokawa happened at least 4.2 billion years ago. Such an astonishingly long survival time for an asteroid the size of Itokawa is attributed to the shock-absorbent nature of rubble pile material.

“In short, we found that Itokawa is like a giant space cushion, and very hard to destroy.”

The Curtin-led team used two complementary techniques to analyse the three dust particles. The first one is called Electron Backscattered Diffraction and can measure if a rock has been shocked by any meteor impact. The second method – argon-argon dating – is used to date asteroid impacts.

Co-author Associate Professor Nick Timms, also from Curtin’s School of Earth and Planetary Sciences, said the durability of rubble pile asteroids was previously unknown, jeopardising the ability to design defence strategies in case one was hurtling toward Earth.

“We set out to answer whether rubble pile asteroids are resistant to being shocked or whether they fragment at the slightest knock,” Associate Professor Timms said.

“Now that we have found they can survive in the solar system for almost its entire history, they must be more abundant in the asteroid belt than previously thought, so there is more chance that if a big asteroid is hurtling toward Earth, it will be a rubble pile.

“The good news is that we can also use this information to our advantage – if an asteroid is detected too late for a kinetic push, we can then potentially use a more aggressive approach like using the shockwave of a close-by nuclear blast to push a rubble-pile asteroid off course without destroying it.”

Published in the Proceedings of the National Academy of Sciences, the research titled “Rubble Pile Asteroids are Forever” is available online here.