Aspect, Clauser, Zeilinger awarded 2022 Nobel Prize in Physics for contributions to the foundations of quantum physics 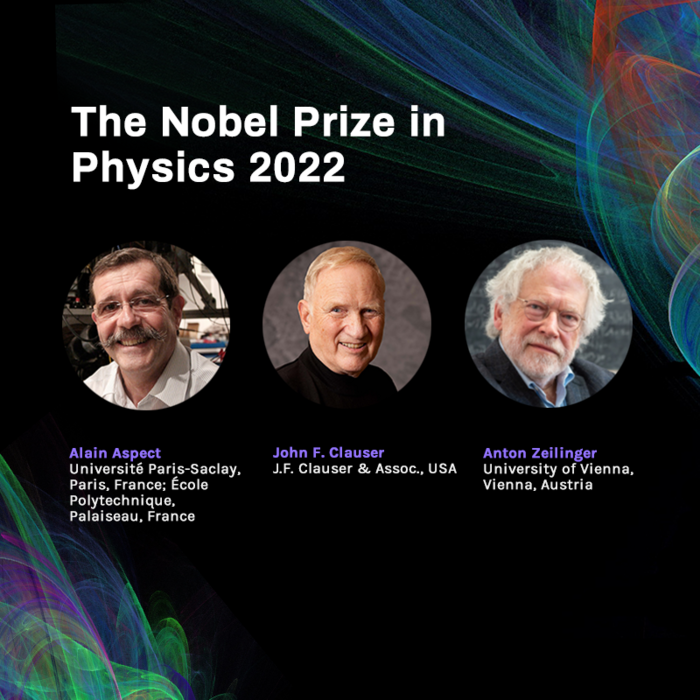 Aspect, Optica Honorary Member and Professor at Université Paris-Saclay and École Polytechnique, Palaiseau, France, Clauser, Optica Emeritus Member and Research Physicist at J.F. Clauser & Assoc and Zeilinger, Optica Fellow and Professor at University of Vienna, Austria, are each awarded one-third of the prize. Their separate but related research employed practical experiments on entangled quantum states, laying the foundation for the emergence of quantum technology.

“Drs. Aspect, Clauser, and Zeilinger established the quantum property of entanglement, and we celebrate the Nobel Foundation selection for their work in quantum optics,” remarked Satoshi Kawata, 2022 President of Optica and emeritus professor Osaka University, Japan. “Drs. Aspect, Clauser, and Zeilinger pioneered early experiments that showed quantum particles could be linked or entangled, such that the random behavior of one is tied to the behavior of the others much more strongly than seems intuitively possible. Quantum entanglement lies at the heart of many of the latest quantum technologies, and today we congratulate these Optica members for their impactful careers in quantum optics.”

Alain Aspect is Augustin Fresnel Professor at Institut d’Optique Graduate School, France, Professor at Ecole Polytechnique, France, Senior Fellow of the Institute of Advanced Studies and adjunct professor at City University, Hong Kong, and Distinguished scientist emeritus at CNRS, France. Aspect’s experimental work focused on situations where the predictions of quantum mechanics are very far from intuition. Since his Ph.D. thesis in 1983 (with Philippe Grangier and Jean Dalibard), Bell’s experimental tests of inequalities demonstrated the astonishing properties of quantum entanglement and invalidated the local realistic vision of the world defended by Einstein. He has received numerous awards and recognitions, including the 1999 Max Born Award, 2011 Herbert Walther Award, and 2013 Frederic Ives Medal/Jarus W. Quinn Prize from Optica. Other significant awards include the CNRS Gold Medal (2005), Wolf Prize in Physics (2010), Niels Bohr Gold Medal and the Unesco-Niels Bohr Gold Medal (2013), and the Balzan Prize in Quantum Information (2013). In 2014, he was named Officier de la Légion d’Honneur, the highest French order of merit. In 2021, he was named an Optica Honorary Member. Learn more: Alain Aspect.

John F. Clauser is an American experimental and theoretical physicist. He is best known for his contributions to the foundations of quantum mechanics, in particular for the Clauser-Horne-Shimony-Holt (CHSH) inequality, the first experimental proof that non-local quantum entanglement is real (Freedman-Clauser), and for the formulation of the theory of Local Realism (Clauser-Horne). In 1987-1991 he proposed (and patented) atom interferometers as useful ultra-sensitive inertial and gravity sensors. In 1992, with Matthias Reinsch, Clauser first deduced the number-theoretic properties of the fractional Talbot effect and invented the Talbot-Lau interferometer. From 1990-1997, with Shifang Li, Clauser first used Talbot-Lau interferometry to build an atom interferometer. In 1998 he invented and patented the use of the Talbot-Lau interferometry for “Ultrahigh Resolution Interferometric X-ray Imaging.” This invention, in turn, allows x-ray phase-contrast medical imaging of soft tissue. Clauser was awarded the Reality Foundation Prize in 1982, the Wolf Prize in 2010, and the 2011 Thompson-Reuters Citation Laureate in Physics. Learn more: John Clauser.

Anton Zeilinger, professor of Physics emeritus at the University of Vienna, is an Austrian quantum physicist. Zeilinger has pioneered quantum mechanics through theoretical and experimental work on entanglement, most notably his demonstration of quantum teleportation in 1997. In 1998, his group was also the first to experimentally demonstrate entanglement swapping—the teleportation of an entangled state between qubits, a critical mechanism for quantum computation networks. Zeilinger was awarded the inaugural Isaac Newton Medal of the Institute of Physics in 2008 recognizing “his pioneering conceptual and experimental contributions to the foundations of quantum physics, which have become the cornerstone for the rapidly-evolving field of quantum information.” He has received many other awards, including the Wolf Prize in 2010, and the Cozzarelli Prize from the National Academy of Sciences in 2019. Learn more: Anton Zeilinger.

The three Nobel Laureates have published papers with Optica Publishing Group. A selection of their papers related to their work recognized by the Nobel Prize is included below. Optica will provide free access to these papers until 4 November 2022.

Optica (formerly OSA), Advancing Optics and Photonics Worldwide, is the society dedicated to promoting the generation, application, archiving and dissemination of knowledge in the field. Founded in 1916, it is the leading organization for scientists, engineers, business professionals, students and others interested in the science of light. Optica’s renowned publications, meetings, online resources and in-person activities fuel discoveries, shape real-life applications and accelerate scientific, technical and educational achievement. Discover more at: Optica.org