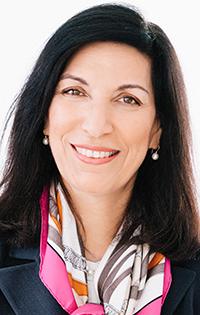 ROCKVILLE, MD – The American Society of Human Genetics (ASHG) has named Huda Zoghbi, MD, as the 2019 recipient of the Victor A. McKusick Leadership Award. Dr. Zoghbi is the director of the Jan and Dan Duncan Neurological Research Institute at Texas Children’s Hospital, a professor of Molecular and Human Genetics at Baylor College of Medicine and an Investigator with the Howard Hughes Medical Institute.

This award, named in honor of the late Victor A. McKusick, MD, recognizes individuals whose professional achievements have fostered and enriched the development of human genetics as well as its assimilation into the broader context of science, medicine, and health. ASHG will present the McKusick Award, which will include a plaque and $10,000 prize, to Dr. Zoghbi on Wednesday, October 16, during the organization’s 69th Annual Meeting in Houston, Texas.

“Dr. Zoghbi’s accomplishments range from discovering genes to identifying their mechanisms and studying potential therapies, demonstrating the value of genetics and genomics research across the spectrum. Her work and efforts embody the leadership and dedication we should all strive for,” said Les Biesecker, MD, 2019 ASHG President.

Since 1988, Dr. Zoghbi’s lab at Baylor College of Medicine has studied rare disorders, motivated by the experience of patients. A five-year-old with Rett syndrome, which affects patients’ ability to speak, walk, eat, and breathe, inspired Dr. Zoghbi to look for its genetic underpinnings. There was no indication at the time that Rett syndrome had genetic connections, but she found that the MECP2 gene on the X chromosome was responsible for Rett syndrome. This discovery illuminated the cause of many of Rett’s symptoms and explained why females are more often affected.

Another of Dr. Zoghbi’s significant contributions to the field was co-discovering the gene for spinocerebellar ataxia type 1 (SCA1) with Harry Orr at the University of Minnesota. SCA1 causes progressive problems with movement, including affecting coordination and balance, as well as speech and swallowing difficulties. Dr. Zoghbi and collaborators additionally found the mechanism driving disease, and then began the hunt for therapies that could slow the progression of disease.

Dr. Zoghbi and her lab also identified the Math1 gene, which can affect the development of inner ear hair cells and of neurons in the cerebellum and brain stem that, in turn, can affect balance, awareness, movement, and breathing. Math1 also was found to cause growth of granule cells, which leads to a common childhood brain tumor. When Math1 was silenced in mice, the tumor did not develop.

In addition to her many scientific discoveries, Dr. Zoghbi is a member of the National Academy of Medicine, the National Academy of Sciences and have received many awards in recognition of her contributions including an honorary Doctor of Science from Yale University and the 2009 International Rett Syndrome Foundation’s Circle of Angels Research Award. Dr. Zoghbi also won the Gruber Neuroscience Prize in 2011 and the Breakthrough prize in 2017. A longtime member of ASHG, Dr. Zoghbi was on the ASHG Awards Committee in 2000.

Scienmag May 23, 2019
UT's Professor John Goodenough, inventor of the lithium-ion battery, has been awarded the Royal Society of London's…