ASCO: Finally, a tool to predict response to chemotherapy before bladder cancer surgery 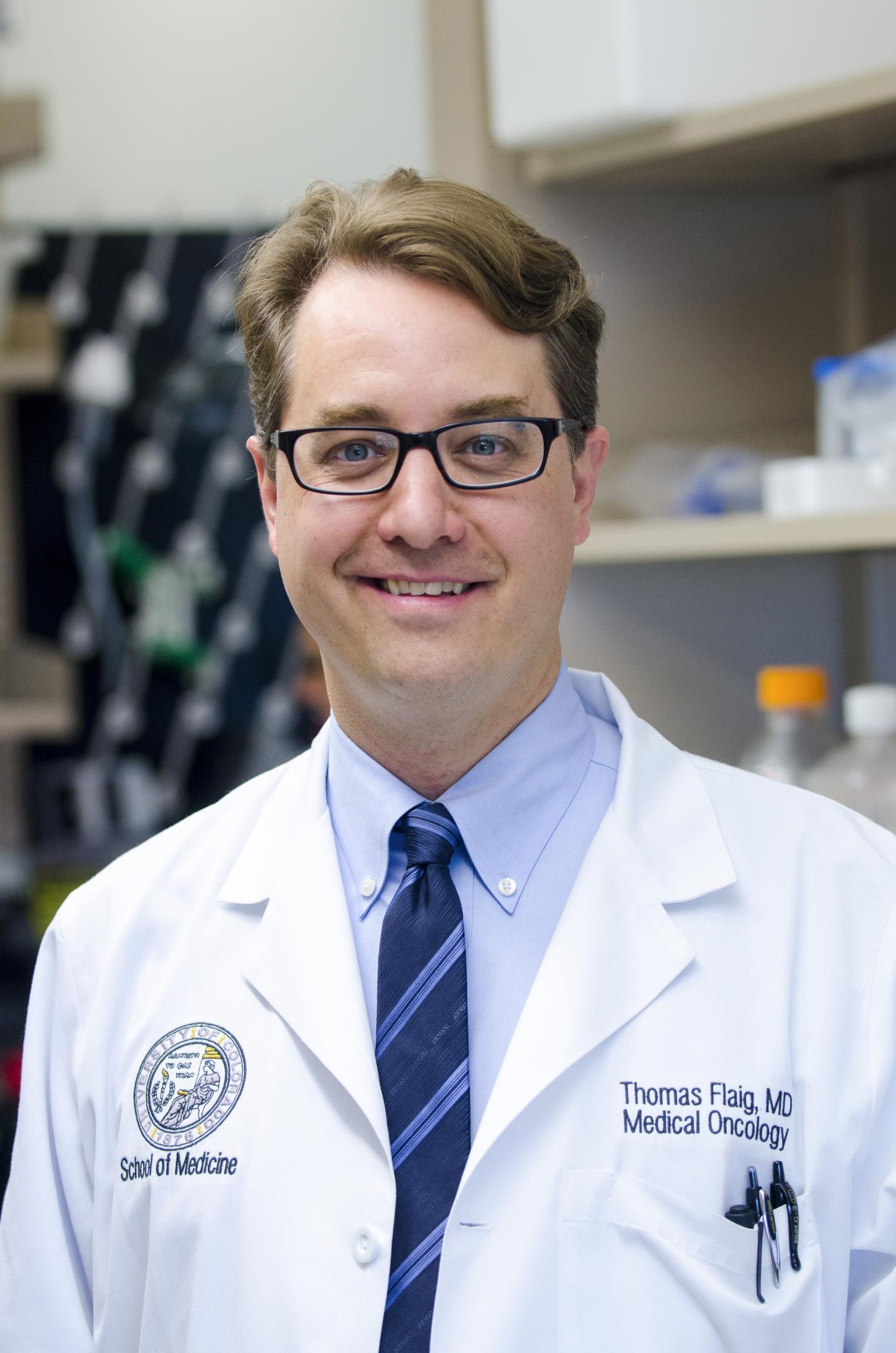 University of Colorado Cancer Center led clinical trial data show that a predictive tool called COXEN may show which bladder cancer patients will respond to pre-surgical chemotherapy, a step towards allowing doctors to offer such chemotherapy to patients likely to respond, while moving more efficiently to other treatment options with patients unlikely to benefit. Results will be presented Monday, June 3 at 8:00am as oral abstract at the 2019 American Society for Clinical Oncology (ASCO) Annual Meeting (ASCO abstract #4506).

“The idea is that for any individual tumor, its gene expression could tell us whether the cancer will respond to a certain kind of chemotherapy,” says Thomas Flaig, MD, Associate Dean for Clinical Research at University of Colorado School of Medicine, Chief Clinical Research Officer of UCHealth, and national principal investigator of the COXEN phase II clinical trial. “This is an important clinical application of a concept developed by investigators based in Colorado, which may have implications in predicting the response to chemotherapies across many cancer types.”

“Gustafson is very good at math and translating it into the clinical setting,” Flaig says. “He was critical to getting this trial up and running.”

The trial enrolled 237 patients with locally advanced bladder cancer, who, as per standard of care, would receive pre-surgical (neo-adjuvant) chemotherapy meant to shrink the cancer and eradicate any microscopic deposits outside of the bladder to increase patients’ overall survival. The challenge for patients and doctors has been that there are two approved chemotherapy regimens for this indication – Gemcitabine-Cisplatin (GC) and Methotrexate-Vinblastine-Adriamycin/doxorubicin-Cisplatin (MVAC).

“It’s really been a coin-flip between the two,” says Flaig.

“If they do respond, you’ve increased your cure rate. If patients don’t respond, you’ve delayed surgery. The problem is that clinicians are making empiric decisions because there are no data to guide specific treatment decisions,” Flaig says.

The goal of the current clinical trial was to provide these data. First, participants were randomized to receive either GC or MVAC. Then Flaig and colleagues gathered gene expression signatures for each tumor and asked a simple question using the COXEN approach: Can we predict whether the patient will respond to his or her chemotherapy? Specifically, the doctors including pathologist Scott Lucia, MD, evaluated whether the chemotherapy resulted in “down-staging” of the tumor at the point of surgery, and then whether surgery resulted in removal of all detectable cancer (called “pathologic T0” or a complete pathologic response).

While COXEN was unable to predict whether a patient responded to the MVAC chemotherapy regimen, when MVAC and GC results were pooled, COXEN showed a statistically significant ability to predict which patients responded using the GC biomarker.

“This was not meant to be a definitive trial, but rather a phase II trial that could give us a signal whether COXEN is able to identify responders in a multi-center, prospective trial. I think the GC COXEN biomarker did pretty well, and we look forward to continuing our work in this area,” Flaig says.

In addition to generating COXEN signatures, tumors from the trial will be evaluated for DNA, microRNA, SNPs, and circulating tumor cells, potentially allowing for the validation of additional biomarkers to increase the power to predict chemotherapy response.

“When this trial started six or seven years ago, bladder cancer was in a different position – we hadn’t had an FDA-approved drug in 30 years. Over the course of this trial, there have been six approved drugs, but none of those drugs are applicable to the neoadjuvant setting. However, with the successful completion of this and other recent bladder cancer trials, there’s budding optimism that we can design trials like this to help patients with this common disease,” Flaig says.

Flaig also points out that regardless of study results, there still remains compelling data to recommend treatment with cisplatin-based chemotherapy – either GC or MVAC – prior to surgery in the treatment of bladder cancer.

“The bladder cancer research community pulled together to get this trial done,” Flaig says. “I’m honored to be part of this group asking and answering questions of essential clinical relevance to our patients.”

Breaking the symmetry in the quantum realm

Pluripotency or differentiation — That is the question

Scienmag May 2, 2019
Credit: @ Helmholtz Zentrum München Induced pluripotent stem cells can turn into any type of cell in the…

Study gives clues to the origin of Huntington’s disease, and a…

When a tree falls in St. Louis, will the power go out?