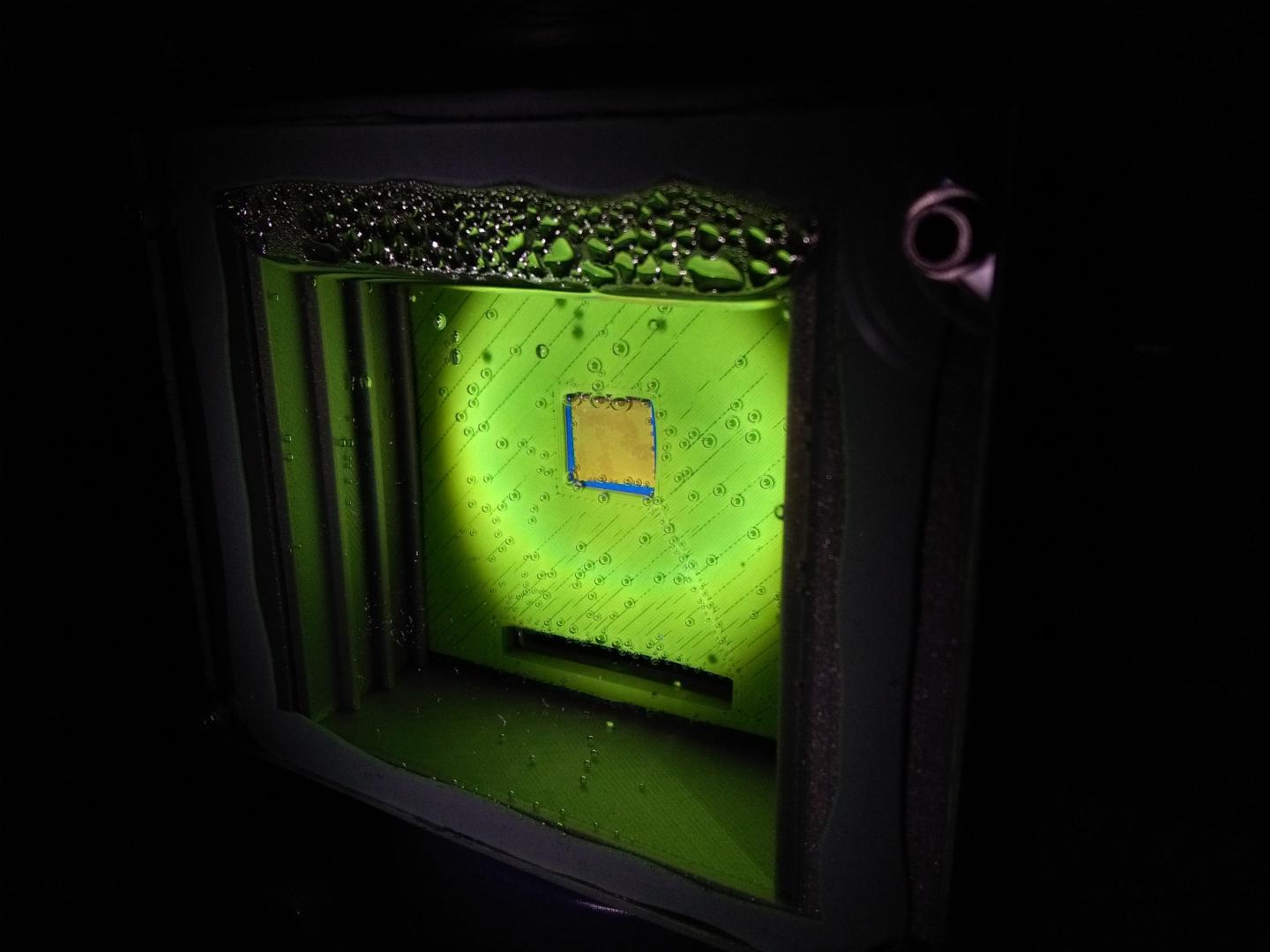 A widely-used gas that is currently produced from fossil fuels can instead be made by an ‘artificial leaf’ that uses only sunlight, carbon dioxide and water, and which could eventually be used to develop a sustainable liquid fuel alternative to petrol.

The carbon-neutral device sets a new benchmark in the field of solar fuels, after researchers at the University of Cambridge demonstrated that it can directly produce the gas – called syngas – in a sustainable and simple way.

Rather than running on fossil fuels, the artificial leaf is powered by sunlight, although it still works efficiently on cloudy and overcast days. And unlike the current industrial processes for producing syngas, the leaf does not release any additional carbon dioxide into the atmosphere. The results are reported in the journal Nature Materials.

Syngas is currently made from a mixture of hydrogen and carbon monoxide, and is used to produce a range of commodities, such as fuels, pharmaceuticals, plastics and fertilisers.

“You may not have heard of syngas itself but every day, you consume products that were created using it. Being able to produce it sustainably would be a critical step in closing the global carbon cycle and establishing a sustainable chemical and fuel industry,” said senior author Professor Erwin Reisner from Cambridge’s Department of Chemistry, who has spent seven years working towards this goal.

The device Reisner and his colleagues produced is inspired by photosynthesis – the natural process by which plants use the energy from sunlight to turn carbon dioxide into food.

On the artificial leaf, two light absorbers, similar to the molecules in plants that harvest sunlight, are combined with a catalyst made from the naturally abundant element cobalt.

When the device is immersed in water, one light absorber uses the catalyst to produce oxygen. The other carries out the chemical reaction that reduces carbon dioxide and water into carbon monoxide and hydrogen, forming the syngas mixture.

As an added bonus, the researchers discovered that their light absorbers work even under the low levels of sunlight on a rainy or overcast day.

“This means you are not limited to using this technology just in warm countries, or only operating the process during the summer months,” said PhD student Virgil Andrei, first author of the paper. “You could use it from dawn until dusk, anywhere in the world.”

The research was carried out in the Christian Doppler Laboratory for Sustainable SynGas Chemistry in the University’s Department of Chemistry. It was co-funded by the Austrian government and the Austrian petrochemical company OMV, which is looking for ways to make its business more sustainable.

“OMV has been an avid supporter of the Christian Doppler Laboratory for the past seven years. The team’s fundamental research to produce syngas as the basis for liquid fuel in a carbon neutral way is ground-breaking,” said Michael-Dieter Ulbrich, Senior Advisor at OMV.

Other ‘artificial leaf’ devices have also been developed, but these usually only produce hydrogen. The Cambridge researchers say the reason they have been able to make theirs produce syngas sustainably is thanks the combination of materials and catalysts they used.

These include state-of-the-art perovskite light absorbers, which provide a high photovoltage and electrical current to power the chemical reaction by which carbon dioxide is reduced to carbon monoxide, in comparison to light absorbers made from silicon or dye-sensitised materials. The researchers also used cobalt as their molecular catalyst, instead of platinum or silver. Cobalt is not only lower-cost, but it is better at producing carbon monoxide than other catalysts.

The team is now looking at ways to use their technology to produce a sustainable liquid fuel alternative to petrol.

Syngas is already used as a building block in the production of liquid fuels. “What we’d like to do next, instead of first making syngas and then converting it into liquid fuel, is to make the liquid fuel in one step from carbon dioxide and water,” said Reisner, who is also a Fellow of St John’s College.

Although great advances are being made in generating electricity from renewable energy sources such as wind power and photovoltaics, Reisner says the development of synthetic petrol is vital, as electricity can currently only satisfy about 25% of our total global energy demand. “There is a major demand for liquid fuels to power heavy transport, shipping and aviation sustainably,” he said.

“We are aiming at sustainably creating products such as ethanol, which can readily be used as a fuel,” said Andrei. “It’s challenging to produce it in one step from sunlight using the carbon dioxide reduction reaction. But we are confident that we are going in the right direction, and that we have the right catalysts, so we believe we will be able to produce a device that can demonstrate this process in the near future.”

Composite metal foam outperforms aluminum for use in aircraft wings