The rolling hills of Connecticut were once home to tens of thousands of fruit orchards – 47,000 by the 1930s. Anyone who has ever grown fruit trees, like apples, knows that insects love fruit as much as humans, and until the 1950s orchards were heavily fortified with lead arsenate-based pesticides to keep the bugs at bay – chemicals that were eventually banned because of their potential for harmful effects on humans. 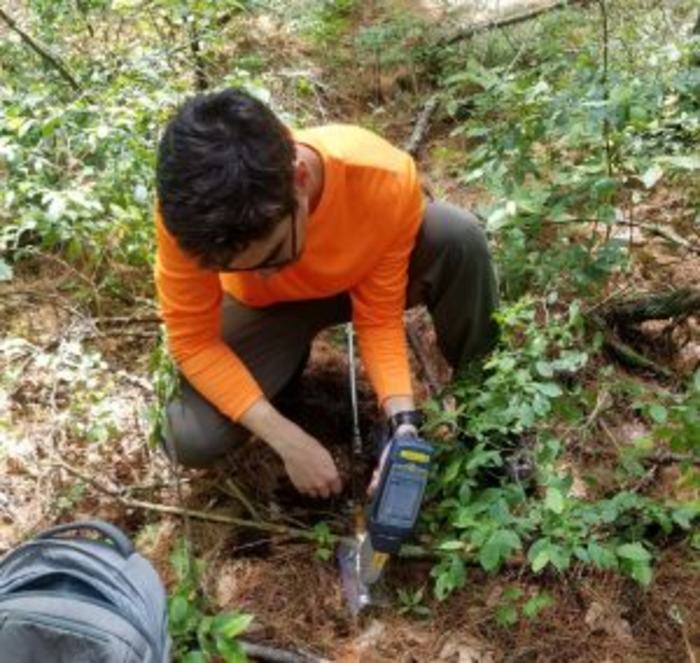 The rolling hills of Connecticut were once home to tens of thousands of fruit orchards – 47,000 by the 1930s. Anyone who has ever grown fruit trees, like apples, knows that insects love fruit as much as humans, and until the 1950s orchards were heavily fortified with lead arsenate-based pesticides to keep the bugs at bay – chemicals that were eventually banned because of their potential for harmful effects on humans.

And even though it has been more than half a century since the last lead arsenate pesticide was used to dowse Connecticut fruit trees, those poisons are not going away anytime soon.

Many of those orchards have long since been converted into residential or commercial property, but new research from UConn and Eastern Connecticut State University researchers finds a strong correlation between arsenic contamination and proximity to those historic orchards — the closer the well is to those locations, the greater the likelihood of finding arsenic there. Their research was published in The Journal of Environmental Quality.

Gary Robbins, UConn professor of geosciences and natural resources, explains the project started with a request from the state Department of Energy and Environmental Protection (DEEP) in 2013. Robbins and his research group, including Mark Higgins ’21 Ph.D. and Meredith Metcalf ’13 Ph.D., study groundwater contamination and work to trace the source of contaminants.

Robbins, working with Metcalf – now an associate professor at ESCU – says they were asked to survey wells for arsenic in eastern Connecticut starting in Lebanon. Metcalf spearheaded the project and was able to collect water samples from hundreds of homes around the eastern half of the state, many of which served as the starting point for Higgins’ Ph.D. dissertation research involving the analysis of over 100 wells and 189 orchards, including soil samples to determine the presence of lead and arsenic.

“After sampling, we looked at the distribution and possible sources of arsenic that caused the groundwater contamination, because a significant percentage of wells were contaminated and many of those were above the EPA drinking water standard,” Robbins says. “The issue that came up is, Where is this all coming from?”

Robbins says initially, it was suspected that arsenic-rich geologic formations could be the culprits. A closer look at the distribution of the wells yielded no obvious answers either. Then the researchers investigated historic uses of arsenic, and found that arsenic-based pesticides were widely used from the late 1800s until the 1950s, when DDT became popular. Tens of millions of pounds of arsenical pesticides were applied every year in the U.S., and a radio program sponsored by the Food and Drug Administration in the 1930s even included this jingle: “A is for Arsenate / lead if you please, / protector of apples / against archenemies.”

Although the lead arsenate pesticides fell out of favor and were banned in some states starting in the 1950s, it wasn’t until 1988 that they were prohibited throughout the U.S.

Higgins, a hydrogeologist at Haley & Aldrich, Inc. who maintains a research affiliation with UConn, found a report listing all the registered farms and agricultural lands in Connecticut in 1935, which included over 47,000 individual orchard fruit tree orchards, including peaches, pears, and apples.

“These pesticides would be sprayed on all fruit trees to kill the pests like gypsy moths up to six times a year in some cases,” Higgins says.

Heavy application rates, coupled with the fact that lead and arsenic can travel quite slowly through the ecosystem, is a combination that makes for long-lasting remnants of the poisons, Higgins says.

As part of their research, the team collected soil cores down to three feet at the orchard sites: “We found high levels of arsenic persisting, more than one would expect for 50 to 60-plus years after these pesticides were applied. It is unlikely that they’re migrating downward into the water anymore and are probably immobile.”

This adds complexity, because despite the strong proximity correlation, the question now is to definitively determine the source of contamination. Higgins says recent studies show certain compounds like phosphate-containing fertilizers are changing environmental conditions, and can start mobilizing previously immobile contaminants in the soil.

The researchers found evidence of leachability of the contaminants in some soils. Robbins says future steps will be to look at the age of water through tritium testing, because under some conditions, like bedrock and glacial till commonly found in Connecticut, water can move through soil and rock extremely slowly, and this impacts how contaminants enter the groundwater supply. Dating that water will help determine if today’s results are the result of the application of pesticides decades ago, or the result of more recent activities.

In other areas of the state, domestic wells are both in close proximity to historic orchards and arsenic-rich geologic formations, says Higgins, and this poses additional challenges to determining the source of the contamination.

“How do we definitively say the contamination came from one or the other or both? We need these additional lines of evidence,” Higgins says. “With this paper, we have a strong dataset as far as the numbers of orchards. With additional funding and data from a larger area, I think it will be telling of whether it’s coming from the orchards or not, and how it is getting into the wells.”

Higgins says he hopes this work will help in educating the public.

“It is important for people in these areas to know, because arsenic at these concentrations is not something that will make you sick tomorrow or in 10 years. But if you’re drinking this low-level arsenic for 30 years, there are likely health risks from chronic exposure to this known carcinogen.”

Robbins adds that though many sanitarians in these localities are aware and do tell people to test their wells, state guidance lists arsenic as something that is not required to be tested for, instead recommending testing every five years. The researchers highly recommend testing domestic wells for arsenic, and say the state guidelines are likely to change.