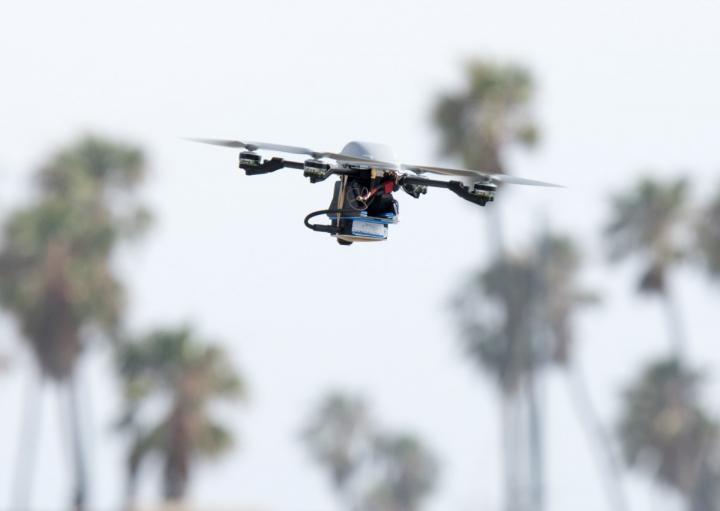 At the U.S. Army Combat Capabilities Development Command, now known as DEVCOM, Army Research Laboratory, researchers collaborated with Uber and the University of Texas at Austin to investigate the acoustic properties of electric vertical takeoff and landing aircraft, which use distributed electric propulsion to power flight.

These eVTOL vehicles may aid the Army with important tasks such as aerial surveillance and cargo transport; however, they feature smaller rotors than traditional helicopters. As a result, eVTOL rotors may emit a different sound signature that researchers will have to take into consideration.

“The noise you hear from these smaller rotors is generated through fundamentally different physical mechanisms,” said Dr. George Jacobellis, Army research engineer at the laboratory’s Vehicle Technology Directorate. “Traditional modeling techniques need to be improved to account for all of the noise generated so that vehicle designers can be aware of what will actually be heard.”

Thickness noise stems from the displacement of the air by the rotor blades, while loading noise occurs when lift and drag forces act on the air that flows around the rotary wings. Together, they make up what experts refer to as tonal noise.

The team confirmed their hypothesis in their research study, which not only measured the acoustic characteristics of various eVTOL rotor configurations but also assessed the modeling capabilities of helicopter noise simulations for eVTOL rotors.

During the field experiment, the researchers set up a test stand with two electrically-powered rotors and recorded the noise generated above and below the rotor plane with nine microphones placed in a circular array surrounding the rotor hub.

For the simulations, the team utilized the Rotorcraft Comprehensive Analysis System coupled with a separate program called PSU-WOPWOP, a routine noise prediction code named after an onomatopoeia for the sound that helicopter blades make.

“RCAS computes the aerodynamic loads, or forces, on the blades as well as the bending and twisting of the blades,” Jacobellis said. “This information is necessary to use as inputs to PSU-WOPWOP, which computes the noise generated by the rotor. Connecting the two programs required a significant amount of work, which was done by our group as well.”

The researchers modeled the broadband noise in PSU-WOPWOP with Pegg’s method, one of the two settings present in the simulation program with the other called Brooks’ method.

While Pegg’s method makes broadband noise predictions based off of experimental data of the entire rotor, Brooks’ method accounts for the unique distribution of lift along the blade.

“[These technologies] are promising in their ability to predict the noise of eVTOL rotors, but we need to do more work to obtain acceptable accuracy,” Jacobellis said. “The next steps are to implement the Brooks method for higher accuracy acoustic predictions and to compare the unsteady loads between the simulation and experiment to check the accuracy of the simulations in predicting the unsteady loads. The Brooks method should be better at capturing unique configurations and loading distributions.”

According to the results of their study, stacked rotors with equally spaced rotor blades produced the lowest noise level, around the same level as that of a traditional rotor.

By investigating different values of axial spacing, Army researchers believe that they may uncover a stacked rotor configuration that produces lower noise than the conventional rotor.

“I do think that a stacked rotor can be beneficial for eVTOL applications,” Jacobellis said. “The added degree of freedom for the design will allow for gains in efficiency and control over the acoustic signature, which has been shown in the results. More investigation is needed, however, to quantify the noise reduction with axial spacing.”