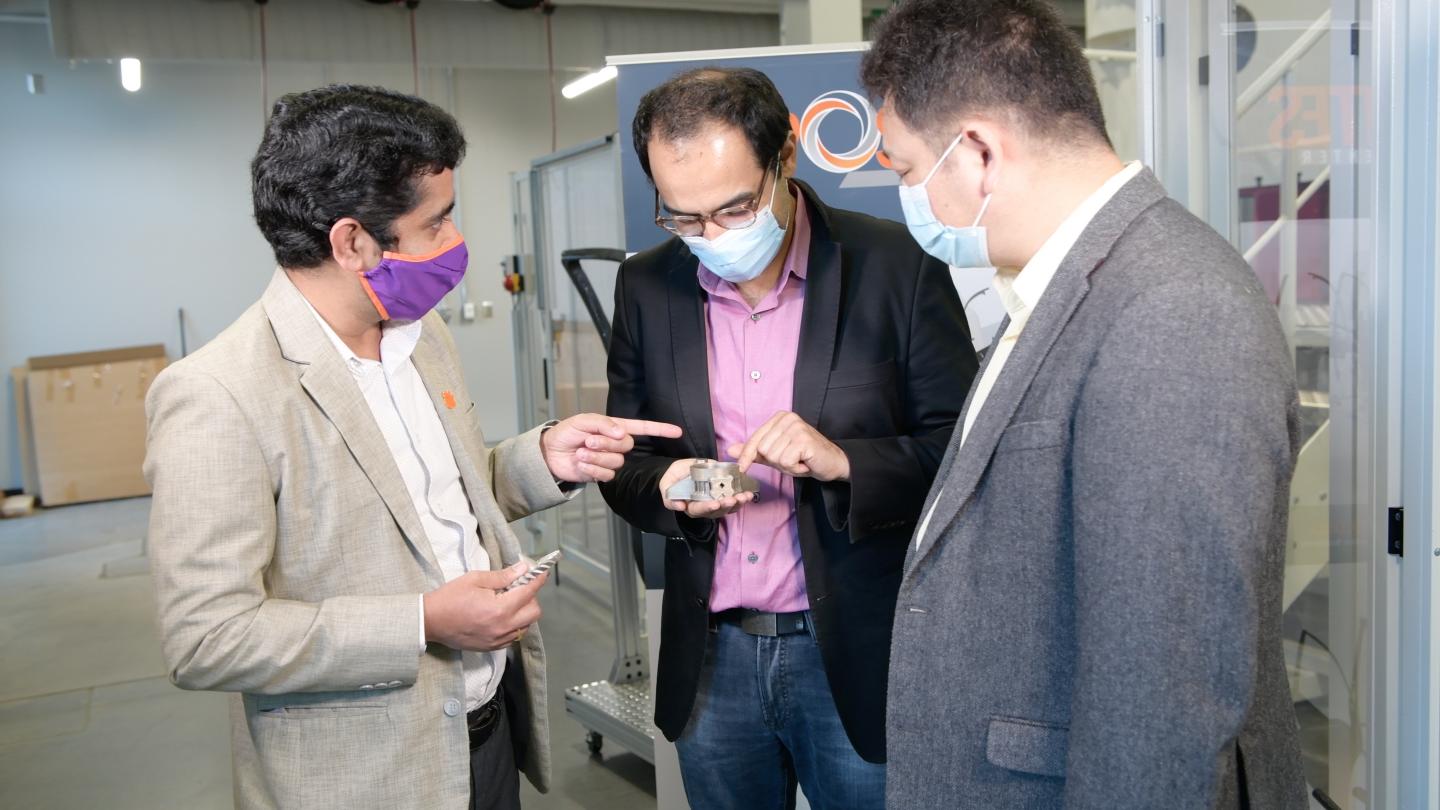 ABERDEEN PROVING GROUND, Md. — A new technology will speed up development of 3D-printed components for a variety of Army applications.

The initiative is part of a cooperative agreement among the U.S. Army Combat Capabilities Development Command, known as DEVCOM, Army Research Laboratory, the Clemson Composites Center at Clemson University, and industry.

Researchers will create a digital lifecycle platform augmented with artificial intelligence, which will help production engineers more quickly and inexpensively design, analyze and fabricate a wide range of large and complex geometry components with embedded multi-functionalities, such as ground and air vehicle structures with power transmission, energy storage, sensing and self-monitoring functions, for achieving overall size, weight, power and cost, or SWaP-C, efficiencies.

Once fully developed, the platform will allow engineers to design and test new components without physically building them.

Part of the challenge in 3D-printing new components is using the right feedstock–the material fed into the 3D printer to print the component. Researchers need to understand the combination of materials and what amounts will create the desired properties, such as strength or stiffness.

“As part of the new project, we will develop a database of raw materials, including metals, plastics and composite materials, that could then be used to train artificial intelligence and create digital models of potential new feedstock materials,” said Srikanth Pilla, the Robert Patrick Jenkins Endowed Professor within the College of Engineering, Computing and Applied Sciences and founding director of the Clemson Composites Center.

To create the database, the researchers plan to print samples called coupons and subject them to a series of tests to measure their chemical, mechanical and thermophysical properties.

Researchers said the coupon testing will position them for more advanced studies in the future. In those studies, they would 3D-print subcomponents that take into account the complex geometries of full-size components.

New discoveries in 3D printing have tremendous potential to impact to how Soldiers are equipped in battle.

“This collaboration will advance the laboratory’s ability to find new and novel ways to advance the science of advanced manufacturing as well as creating a pipeline of new talent, all towards our mission to operationalize science for transformational overmatch,” said Stephanie Koch, an associate director at ARL.

“Through our collaboration with the DEVCOM Army Research Laboratory, we’ve made tremendous strides in developing the world’s largest, fastest metal powder 3D printer,” said Jose Doval of 3D Systems. “Expanding this work with Clemson University allows us to push the limits of the technology even further. This includes investigating new methods of in-situ detection, as well as ways to visualize the build in real-time from the data collected in each layer.”

Partnership with industry and academia have enabled much of the lab’s progress in scientific discoveries and technology advancement.

“Over the past few years South Carolina has seen record investment and growth, a large portion of which can be accredited to the willingness of our colleges and universities to partner with new and existing businesses,” said South Carolina Gov. Henry McMaster. “This project between Clemson and 3D Systems highlights the success and the continued commitment of our higher education system to not only provide a highly skilled workforce but to forge important partnerships with our business community that ultimately lead to a stronger South Carolina.”

ARL and Clemson will discuss their continued collaborative efforts at a symposium this spring, focusing on potential collaboration under the major research thrusts of the recently established Mx Initiative at Clemson. The symposium will feature technical sessions in multifunctional materials and composites, manufacturing sciences and engineering, materials for extreme environments, multiscale multiphysics computational sciences and engineering, and materials informatics driven by artificial intelligence.