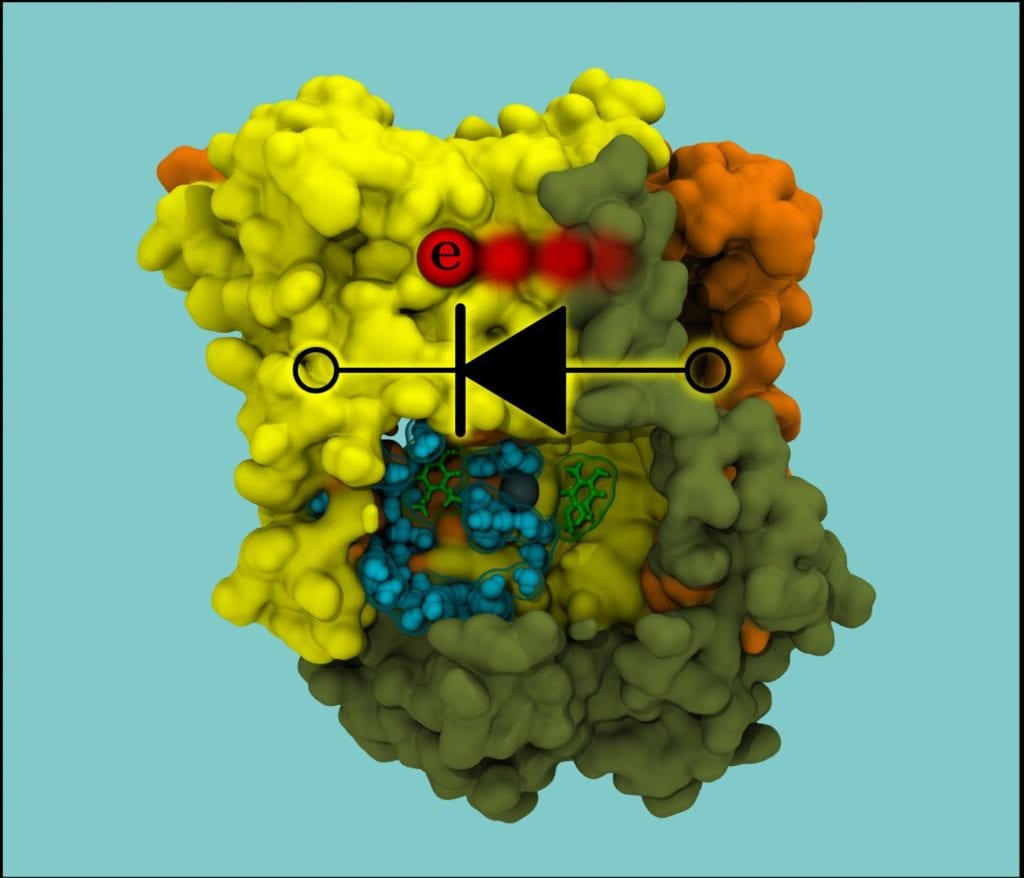 For Arizona State University’s Dmitry Matyushov, professor in the School of Molecular Sciences and the Department of Physics, years of studying how electrons make their way through some important protein molecules has been recently rewarded with two major grants from the National Science Foundation (NSF) and the Department of Energy (DOE).

“Matyushov’s groundbreaking work on protein energetics and structural dynamics has opened a new window into the role of protein movement across many timescales in reaction mechanism,” said Professor Neal Woodbury, director of the School of Molecular Sciences, which is part of the College of Liberal Arts and Sciences. Dmitry Matyushov Trapping of electrons by protein water allows unidirectional flow of electrons (diode effect) in energy chains of biology. Dmitry Matyushov has recently earned two research grants to elucidate the magic of proteins. Proteins can accelerate reactions important for physiology by many orders of magnitude. How this catalytic effect occurs is still a grand intellectual challenge and a very practical question that Matyushov hopes to answer with help of the recent NSF grant.

Understanding principles of catalysis by proteins will lead to improvements of many human-made catalysts.

What is the path for improvement? Is the efficiency of naturally occurring enzymes based on new fundamental principles of operation or only on the successful combination of known tricks?

This project addresses these questions. Matyushov claims that acceleration of chemistry achieved by proteins is indeed based on new principles, which can be broadly described as nonergodic chemical kinetics.

“Dmitry has made a very significant contribution to our understanding of the electronic properties of proteins. Usually, electrons are thought to move slowly through proteins because they are strongly trapped at sites along the way. But Dmitry has shown that, if they move rapidly, the trapping energy is reduced because the atoms and molecules around the trapping site do not have time to respond. In other words, rapid transport induces the condition needed for rapid transport. This could be the key to understanding many unusual properties of proteins,” said Stuart Lindsay, Regents’ Professor and director of ASU’s Center for Single Molecule Biophysics. Lindsay is also a professor in the School of Molecular Sciences and the Department of Physics.

There is another dimension to this problem. The types of proteins considered in this project, electron-transfer proteins, are a key component of biological energy production machinery.

All energy of biology is produced by such proteins in the process of photosynthesis (bacteria and plants) or in cellular mitochondria (animals). How the energy of food is converted to the energy of the cell is mostly related to the question of how these specific proteins shuttle electrons across the cellular membrane.

“Orientations or water molecules next to the protein surface change dramatically relative to bulk water, thanks to a large number of surface charges,” Matyushov explained. “These highly oriented interface molecules are constantly shifted by the ‘moving jelly’ of the folded protein producing an effect similar to electricity caused by a vibrating piezoelectric crystal: The electrostatic potential constantly fluctuates at the active site because of thermal agitation of the protein-water interface.”

On the other hand, the DOE grant addresses the need to curb the level of carbon dioxide in the atmosphere and to produce fuels that help with the design of effective schemes for separation of charge with solar energy.

Matyushov’s recent focus has been on extending the computational capabilities for materials research into the realm of high-performance computing. While significant advances using parallel computer architectures have indeed been achieved, there is an urgent need to translate the results of computations into reliable theoretical formalisms cast in terms of measurable material properties, which practitioners can use for predictive exploration of the parameters affecting solar energy conversion.

This project takes the next step in developing practical theories of charge transfer in complex media and interfaces. These new systems offer significant advantages for tunability of material properties, but they also present challenges for rational design.

To sum up, Michael Thorpe, Foundation Professor in the Department of Physics, explained, “The modeling and theoretical work of Professor Dmitry Matyushov on non-equilibrium electron transport has again been recognized by two new major grants from the National Science Foundation and the Department of Energy. Electron transport is profoundly different in proteins surrounded by water where a better understanding can lead to the development of better human-made catalysts. This work is focused on understanding the unusual chemical kinetics in proteins with application to improved solar energy cells.”