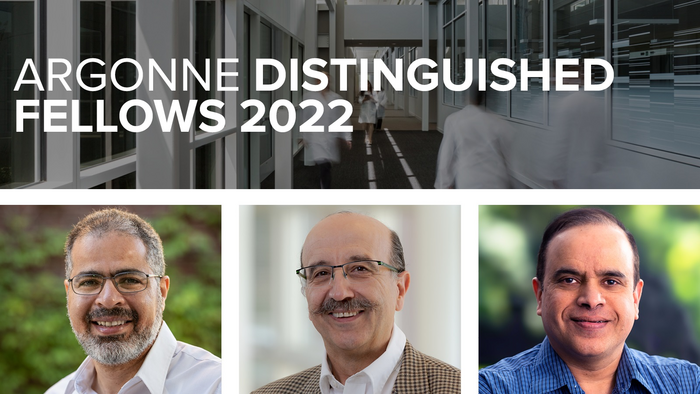 The distinction is difficult to achieve. In addition to establishing international reputations, Argonne Distinguished Fellows must demonstrate exceptional achievements in science or engineering relevant to Argonne’s core missions. They must show critical technical leadership of major, complex, high-priority projects or programs that have an impact on the future of the laboratory or its mission. These high standards explain why only a small fraction of the lab’s research staff — approximately 3% — receive the honor.

“Argonne serves the nation by pushing the frontiers of science and technology. This year’s Argonne Distinguished Fellows are known worldwide for doing exactly that.” — Paul Kearns, Argonne director

“Argonne serves the nation by accelerating science and technology for prosperity and security,” said Argonne Director Paul Kearns. ​“This year’s Argonne Distinguished Fellows are known for doing exactly that. They are leaders in innovative research, impactful published work and ongoing engagement with the scientific community and industry.”

Amgad Elgowainy is a senior scientist and group leader in Argonne’s Systems Assessment Center of the Energy Systems and Infrastructure Analysis division. He focuses on the electrification and infrastructure of clean energy systems. He is particularly known for his modeling and techno-economic and environmental life cycle analysis of hydrogen technologies, low-carbon fuels and the electrification of transportation via fuel cells and batteries. Providing economic and environmental insights, these models and simulations are used by thousands of researchers around the world. He is an expert in hydrogen technology development and deployment, and he developed several licensed patents related to hydrogen fueling methods. Elgowainy is recipient of numerous accolades from academia, government and industry. This includes a Secretary of Energy Honor Award in 2020. Elgowainy is the author or co-author of more than 200 technical publications.

Zein-Eddine Meziani is a senior scientist and group leader in medium energy physics in Argonne’s Physics division. He has published heavily in the field of nuclear physics, especially on topics related to subatomic particles (such as protons and neutrons) and the actions of the strong force between the even smaller quarks within them. He has served on a number of high-profile committees and is a highly desired invited speaker at international conferences and workshops. He is widely recognized for recent work at DOE’s Thomas Jefferson National Accelerator Facility, in which he clarified the spin structure of the proton and neutron. In that work, he shed light on the role of gluons — subatomic particles that may bind quarks together — in providing proton mass. Additionally, his repeat of his groundbreaking Coulomb sum rule experiment is expected to cement a new understanding of how atomic nuclei are made. Meziani served on the National Academies Committee to help with a U.S.-based Electron Ion Collider (EIC) Assessment. This work helped guide design and construction of an EIC at Brookhaven National Laboratory, also a DOE national laboratory.

Rajeev Thakur is a senior computer scientist and deputy director of Argonne’s Data Science and Learning division. During his 27-year career at Argonne, he has conducted research that led to widely used standards for communication and input/output (I/O) in parallel programs. His research also led to open-source software (MPICH and ROMIO), which have been widely adopted by the high performance computing industry and form a critical component for parallel scientific applications on the world’s largest supercomputers. He has held a leadership role in DOE’s Exascale Computing Project, for which he was director of software technology at its inception in 2016. He continues as the program’s lead for the programming models and runtimes area. Thakur has won several best paper awards at international conferences and symposiums, including those convened by the Institute of Electrical and Electronics Engineers (IEEE), and an R&D 100 Award in 2005. He was recently named an IEEE Fellow for his long-term contributions to high performance interfaces for scalable computing systems.