Two projects will demonstrate improved separation technologies to help the U.S. get even more energy out of safe, clean nuclear power. 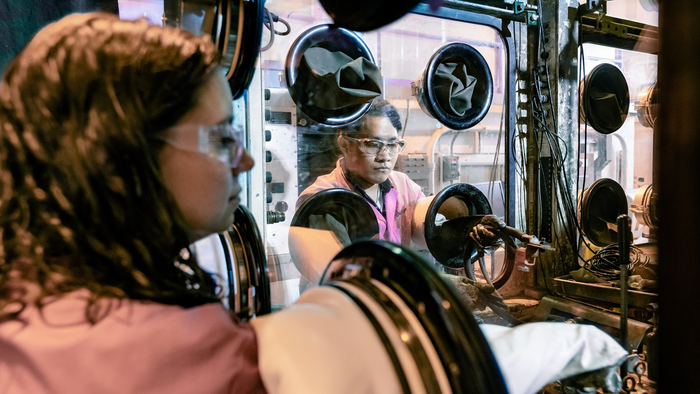 Two projects will demonstrate improved separation technologies to help the U.S. get even more energy out of safe, clean nuclear power.

A very small fraction of the energy available in nuclear fuel is used during the production of nuclear energy. The amount that remains can be recovered and recycled to create a lot of electricity. The U.S. Department of Energy’s (DOE) Advanced Research Projects Agency-Energy (ARPA-E) estimates that the untapped energy remaining in used nuclear fuel, sometimes referred to as spent nuclear fuel, can generate enough clean energy to power more than 70 million homes.

Recently, ARPA-E awarded more than $6 million to DOE’s Argonne National Laboratory to develop and demonstrate innovative processes and technologies that focus on recycling used nuclear fuel (UNF). The funding is awarded through the Converting UNF Radioisotopes Into Energy (CURIE) program.

Nuclear energy is the source of approximately one-fifth of total electricity used in the U.S., and it provided half of the nation’s carbon-free electricity in 2021. Improving electrochemical separation and other UNF recovery and recycling technologies could help nuclear energy do more. More efficient use of nuclear energy would significantly decrease domestic reliance on fossil fuels and the related greenhouse gases that contribute to climate change. It would reduce waste and produce new fuel for advanced reactors. This last benefit would lead to deployment of new advanced reactors, which would provide even more safe, clean, reliable electricity.

Argonne will use ARPA-E’s funding to advance two projects. The larger project will combine Argonne’s leadership in nuclear research and development with the experience of nuclear industry partners Oklo Inc. and Deep Isolation. Argonne will collaborate with Case Western Reserve University on both projects.

The larger project was awarded $4.9 million. It focuses on increasing the efficiency and, therefore, the economics of nuclear fuel recycling processes. Argonne, Oklo Inc. and Deep Isolation are working to improve a process that converts UNF oxide fuel to a metal that can then be processed to provide usable materials for advanced reactor fuel. The project will combine improvements in stable, next-generation anode materials and sensors used to control the process to maximize the amount of material that can ultimately be recovered.

State-of-the-art facilities that reprocess light water nuclear reactor fuels use equipment known as packed bed columns. Packed bed columns are tall canisters filled with a packing material that mixes the fluids flowing from one end to the other during chemical separations.

Servis’ team’s design instead uses PACERs (PAcked Centrifugal Equipment for Radiochemical separations). PACERs are rotating packed bed contactors that are considerably more efficient than the columns. They use centrifugal forces much greater than the pull of gravity to boost the speed and efficiency of chemical separations. They are also notably smaller. For scale, imagine replacing a water tower-sized packed bed column with a shed-sized PACER.