Are Urban Railways in Tokyo on the right track? Researchers from Japan attempt to answer

Most large cities in the world have adopted some or many forms of urban railway transportation; they are a tried-and-tested way of efficiently and reliably taking passengers where they need to be. Trains in the Tokyo Metropolitan Area (TMA) of Japan are the most preferred means of transport for a great percentage of commuters and tourists, but tend to get highly congested during peak hours. While the railway operators tend to economically benefit from in-vehicle congestion, the quality of service provided to passengers quickly degrades when certain congestion levels are exceeded. 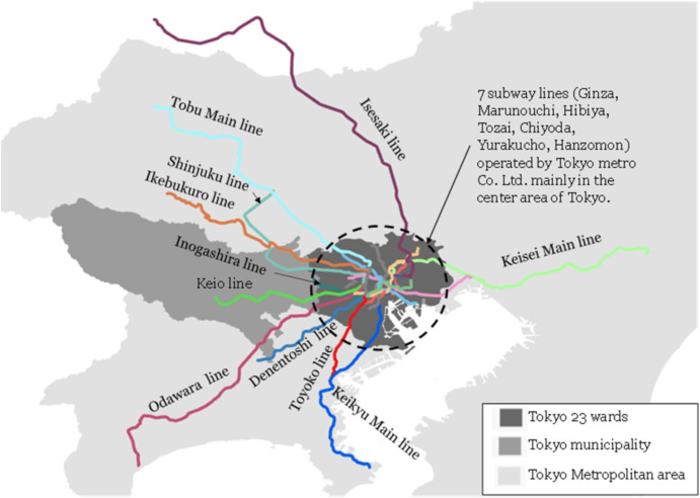 Most large cities in the world have adopted some or many forms of urban railway transportation; they are a tried-and-tested way of efficiently and reliably taking passengers where they need to be. Trains in the Tokyo Metropolitan Area (TMA) of Japan are the most preferred means of transport for a great percentage of commuters and tourists, but tend to get highly congested during peak hours. While the railway operators tend to economically benefit from in-vehicle congestion, the quality of service provided to passengers quickly degrades when certain congestion levels are exceeded.

This long-standing problem persists in the TMA because capital investments to improve existing lines have been lacking. Railway companies haven’t bothered increasing the capacity of their lines because they believe this would deteriorate their financial performance. But why is it that some TMA lines with high in-vehicle congestion rates still struggle financially while others with lower congestion rates outperform them? And why do lines with similar in-vehicle congestion rates vary from each other in economic performance?

These are some of the questions a team of researchers led by Associate Professor Yiping Le of Shibaura Institute of Technology, Japan, sought to answer in a recent study. They noted that few empirical studies on the topic of railway operational efficiency had included in-vehicle congestion as a variable or attempted to link it to financial performance. Motivated by this knowledge gap, the team analyzed the efficiencies of 18 urban railway lines in the TMA at the line level under different lenses and included in-vehicle congestion among the variables considered. The corresponding paper was made available online on December 28, 2021 and was published in Volume 116 of Transport Policy in February 2022.

The researchers used the well-established data envelopment analysis (DEA) approach, which is widely used for efficiency analyses in many economic sectors. Unlike other studies, however, this was the first to use DEA to analyze railway efficiency at the individual line level. Three different types of efficiency were considered. The first was operational efficiency, which denotes that greater service output (passengers transported) with lower infrastructure leads to higher efficiency. The in-vehicle congestion rate was also incorporated as an output value to represent service quality. The other two efficiencies were cost and revenue efficiency, with the former denoting that lines spending less for a given service volume are more efficient and the latter denoting that lines earning more revenue for a given service volume are more efficient. “Our study does not propose a new method for evaluating railway performance, but instead aims to empirically add the aspects of in-vehicle congestion to the existing factors related to railway performance,” explains Associate Prof. Le. “An efficiency analysis of Japanese railway lines that incorporates both financial performance and in-vehicle congestion has implications for developing a public transit strategy that stands to benefit not only railway operators but also the people who use these railways.”

After thoroughly analyzing and comparing the results for the 18 TMA lines, the research team identified several critical factors that affect railway efficiencies and discussed possible strategies to improve them. “Our findings should contribute to the development of business strategies for the local railway companies operating each line in the Tokyo Metropolitan Area,” remarks Associate Prof. Le. “This should lead to a more efficient operation of urban railways with a higher service level, paving the way to a more railway-oriented urban structure based around sustainability in the long term.” Worth noting, the implications of this study are also relevant for evaluating railway lines in other large cities, since they are likely to face a similar trade-off between in-vehicle congestion and financial performance as those in the TMA.

Let us hope urban railway lines all around the world can be efficiently decongested so that more and more people choose to rely on them instead of cars. Dr. Le and her team are certainly on the ‘right track’!

Yiping Le is an Associate Processor of the Department of Civil Engineering at SIT. Her main research interests lie in mobility, infrastructure planning, and tourism. She specializes in behavioral changes in the fields of transportation and tourism through information provision, and analyzes these behaviors using techniques such as GPS travel trajectory. She also studies the performance of urban transit rail systems. Thus far, she has published eight research papers on these topics.

This research did not receive any specific grant from funding agencies in the public, commercial, or not-for-profit sectors.