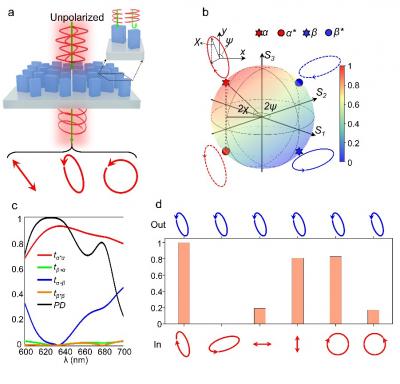 In a new paper in Light Science & Application, a team of scientists, supervised by Prof. Xiangping Li and Zi-Lan Deng from Guangdong Provincial Key Laboratory of Optical Fiber Sensing and Communications, Institute of Photonics Technology, Jinan University, China and co-workers have proposed an effective approach to achieve full Poincaré sphere polarizers in one step by extending circular conversion dichroism (CCD) to arbitrary polarization conversion dichroism (APCD) by means of a monolayer metasurface. By using dimerized meta-molecules composed of a pair of birefringent meta-atoms with properly tailored anisotropic phase responses and relative orientation angles, the collective interference of far-field radiation from those meta-atoms can be controlled to generate APCD. This system is able to preferentially transmit one polarization state that can be located at an arbitrary position on a Poincaré sphere and convert it into transmitted light with flipped handedness while completely blocking the orthogonal polarization state. This APCD metasurface is capable of generating an arbitrarily polarized beam located at an arbitrary position on the Poincaré sphere, irrespective of input polarization, and thus acts as a polarizer that can cover the full Poincaré sphere by design.

In practice, we realize such APCD in an all-dielectric metasurface platform in the visible frequency range, manifesting transmissive polarization dichroism (PD) of nearly 100% in theory and greater than 90% experimentally. We exploit the perfect PD feature of this system to demonstrate arbitrary polarization, including linear, circular and elliptical polarization, directly from unpolarized light. This all-in-one metasurface polarizer serves as a monolithic arbitrary polarization generator, ultimately promising miniaturized optical devices for integrated nanophotonic systems with substantially reduced complexity. These scientists summarize the operational principle of their Poincaré sphere polarizer:

“The dichroism parameter is near 100% in simulation and greater than 90% experimentally, this perfect performance make the designed metasurface works as polarizer for arbitrary polarization, even on unpolarized beam” they added.