‘Arapuca’, a device developed in Brazil for international neutrino experiment, is enhanced

One of the makers of the light detector to be used in the Deep Underground Neutrino Experiment (DUNE) presented a new version, X-Arapuca, that will make the capture of photons even more efficient, at FAPESP Week London 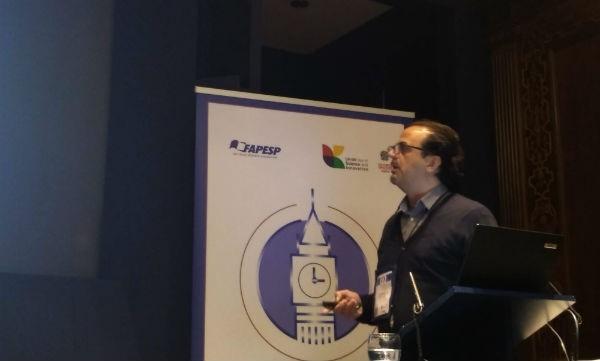 A critical part of one of the largest recent particle physics experiments was developed in Brazil. The Arapuca is a light detector to be installed in the Deep Underground Neutrino Experiment (DUNE) – a project that is searching to discover new properties of neutrinos, fundamental particles with very little mass that travel at close to the speed of light.

The X-Arapuca is an enhanced version of the light detector developed by professors Ettore Segreto of the Gleb Wataghin Physics Institute of the University of Campinas (UNICAMP), and Ana Amélia Bergamini Machado, collaborating researcher from the same institution. The researchers are supported by FAPESP through the Liquid Argon Project at UNICAMP.

The device was the subject of the session given on Day One of FAPESP Week London, an event taking place February 11-12, 2019.

The detector will be installed in the DUNE, which is expected to begin construction in the United States in 2021 (read more about the project at: agencia.fapesp.br/25556).

DUNE will be equipped with two huge detectors. The first will be close to the source at the Fermi National Laboratory (Fermilab) in Batavia, Illinois. The lab’s particle accelerator will produce a powerful neutrino beam.

That beam will travel to the second, much larger detector, 1,300 km away, at the Sanford Underground Research Facility in South Dakota, holding 70,000 tons of liquid argon and located 1.5 km underground. The site will also hold 60,000 X-Arapuca detectors that will be responsible for detecting the light emitted by the beam. Each X-Arapuca will measure 10 x 8 cm.

The entire system is being tested on a smaller scale – the ProtoDUNE – in operation since September 2018 at the European Organization for Nuclear Research (CERN) on the border between France and Switzerland.

“This is the most recent development of the Arapuca. It provides even greater efficiency based on the same principle while introducing minor modifications. We are running the tests at UNICAMP and the detector seems to be very good. In addition to that, construction is simpler,” Segreto told.

One of the modifications was the inclusion of a guide light – a device made out of a material that more efficiently traps the photons inside the detector. It is easier to measure the properties of light by capturing more of it. “The idea of these larger detectors is to direct even more photons to the active detectors, silicon sensors that are much smaller,” Segreto said.

These small sensors are expected to be the only parts of the X-Arapuca that will not be made in Brazil. “The idea is that all the other components will be made in the country as will the device’s assembly,” said the researcher who will lead the entire light detection portion of the experiment.

The light will be produced when the neutrino beam reaches the argon liquid in the DUNE’s principal detector and produces scintillation. Among the factors that influenced the choice for liquid argon is its scintillation capacity, which is much larger than the water used in other experiments like Japan’s Super-Kamiokande.

The argon will be distributed in four modules, each holding argon kept in a liquid state by refrigeration to -184° C. Liquid argon will also make it possible to obtain 3D images of the interactions with an unprecedented amount of detail and precision.

The experiment is expected to provide answers about how the Universe was formed, such as what is known as the “charge-parity symmetry violation of the leptons,” which just after the Big Bang would have produced a small surplus of matter over antimatter. This surplus is the Universe we know.

“One of the challenges we have with this type of agreement is how the different funding agencies from other countries contribute resources. Whoever puts up the money wants it to be spent, and the expertise developed, locally. The idea is that Brazil is not just contributing funds, but that the detectors are being built in the country and installed in the DUNE through the use of Brazilian know-how. This is usually hard to do, but we’re going to manage to do it in this case,” said the researcher.

Gender and cultural bias exists against teachers at university level

Researchers look to nature to unearth the secrets of cyclic imine…