Seismologists from The Australian National University (ANU) have developed a new method to scan the deep interior of planets in our solar system to confirm whether they have a core at the heart of their existence. 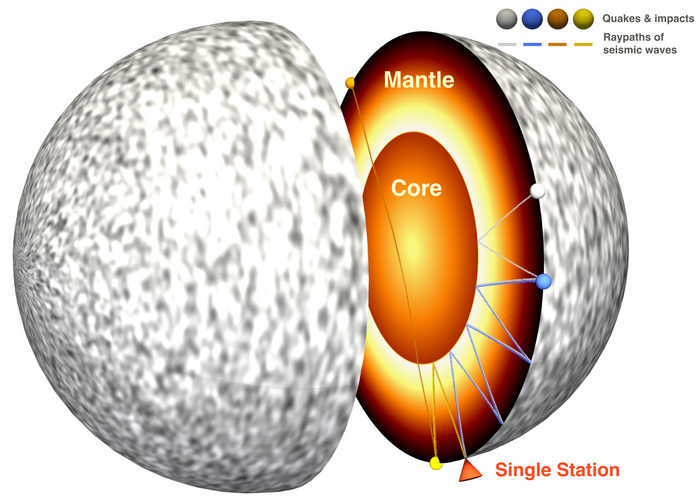 Seismologists from The Australian National University (ANU) have developed a new method to scan the deep interior of planets in our solar system to confirm whether they have a core at the heart of their existence.

The scanning method, which works in a similar way to an ultrasound scan using sound waves to generate images of a patient’s body, requires only a single seismometer on a planet’s surface in order to work. It can also be used to confirm the size of a planet’s core. The research is published in Nature Astronomy.

Using the ANU model to scan the entirety of Mars’ interior, the researchers confirmed the Red Planet has a large core at its centre – a theory first confirmed by a team of scientists in 2021.

Study co-author Professor Hrvoje Tkalčić, from ANU, said based on data collected using the ANU technique, the researchers determined that the Martian core, which is smaller than Earth’s, is about 3,620 kilometres in diameter.

“Our research presents an innovative method using a single instrument to scan the interior of any planet in a way that’s never been done before,” he said.

Confirming the existence of a planetary core, which the researchers refer to as the “engine room” of all planets, can help scientists learn more about a planet’s past and evolution. It can also help scientists determine at what point in a planet’s history a magnetic field formed and ceased to exist.

The core plays an active role in sustaining a planet’s magnetic field. In the case of Mars, it could help explain why, unlike Earth, the Red Planet no longer has a magnetic field – something that is critical to sustaining all life forms.

“Modelling suggests that the Martian core is liquid and while it is made up of mostly iron and nickel, it could also contain traces of lighter elements such as hydrogen and sulphur. These elements can alter the ability of the core to transport heat,” lead author Dr Sheng Wang, who is also from ANU, said.

“A magnetic field is important because it shields us from cosmic radiation, which is why life on Earth is possible.”

Using a single seismometer on Mars’ surface, the ANU team measured specific types of seismic waves. The seismic waves, which were triggered by marsquakes, give off a spectrum of signals, or “echoes”, that change over time as they reverberate throughout the Martian interior.

These seismic waves pierce through and bounce off the Martian core.

Professor Tkalčić said researchers are interested in the “late” and “weaker” signals that can survive hours after they are emitted from quakes, meteoroid impacts and other sources.

“Although these late signals appear to be noisy and not useful, the similarity between these weak signals recorded at various locations on Mars manifests itself as a new signal that reveals the presence of a large core in the Red Planet’s heart,” Professor Tkalčić said.

“We can determine how far these seismic waves travel to reach the Martian core but also the speed at which they travel through Mars’ interior. This data helps us make estimations about the size of Mars’ core.”

The researchers say their method of using a single seismometer to confirm the presence of a planetary core is also a “cost-effective solution”.

“There is a single seismic station on Mars. There were four of them on the Moon in 1970s. The situation of having a limited number of instruments is unlikely to change in the coming decades or even this century due to high cost,” Dr Wang said.

“We need an approach right now to use only a single seismometer to study planetary interiors.”

The researchers hope this new ANU-developed technique involving a single seismometer could be used to help scientists learn more about our other planetary neighbours, including the moon.

“The US and China plan to send seismometers to the moon, and Australia also has ambitions to participate in future missions, so there’s potential for further studies using new and more sophisticated instruments,” Professor Tkalčić said.

Dr Wang said: “Although there are many studies on planetary cores, the images we have of planetary interiors are still very blurry. But with new instruments and methods like ours we’ll be able to get sharper images which will help us answer questions such as how big the cores are and whether they take a solid or liquid form.

“Our method could even be used to analyse the Jupiter moons and the outer solar system planets that are solid.”

To carry out their research, ANU scientists used data collected from a seismometer attached to NASA’s InSight lander, which has been collecting information about marsquakes, Martian weather and the planet’s interior since touching down on Mars in 2018.