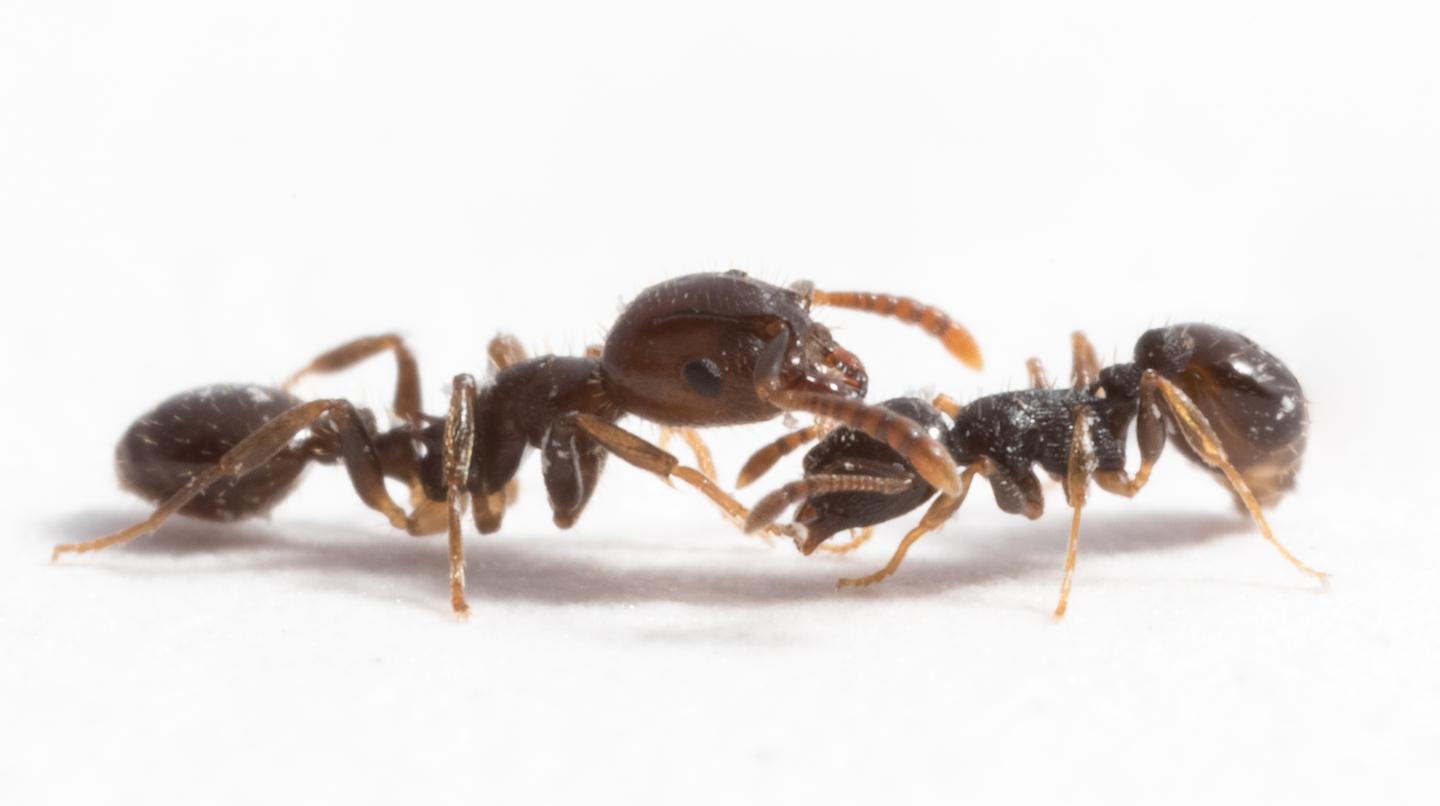 Temnothorax americanus is a slavemaking ant found in northeastern America. These tiny social insects neither rear their offspring nor search for food themselves. Instead, they raid nests of another ant species, Temnothorax longispinosus, kidnap their larvae and pupae to bring these back to their own nest. Once these have reached adulthood, the abducted ants must feed the brood of the slavemaking species, search for food, feed the slavemakers, and even defend their nest. A colony of slavemakers, consisting of a queen and two to five workers, can keep 30 to 60 slaves. In a new study, biologists from Johannes Gutenberg University Mainz (JGU) examined the special relationship between the parasites and their host and made an exciting discovery: The ability of the host ants to defend themselves depends crucially on whether the raiding slavemakers come from an area with a successful or less successful parasite population. If the slavemakers come from a site where slavemakers are rare, the host ants react aggressively to the invaders. If, in contrast, the intruders come from an area where slavemakers are common, the hosts do not recognize them and, as a result, do not respond aggressively. The study also revealed that this difference in how they react is also reflected in how active the genes associated with aggression are in the brain of the ants.

Similar to avian brood parasites such as cuckoos, T. americanus belongs to a class of parasites known as social parasites that do not directly harm the bodies of their hosts, but manipulate their social or brood care behavior instead. The social parasites and their hosts are engaged in a “co-evolutionary arms race”: The parasites perfect the exploitation of their hosts, while the hosts continually develop better defensive strategies. When parasitic pressure is low, T. longispinosus reacts to an attack with coordinated combat, but, in sites where parasitism is more prevalent, its defense strategy shifts from fight to flight. It was the precise nature of this relationship, and the corresponding reactions, that Professor Susanne Foitzik’s work group at the JGU Institute for Organismic and Molecular Evolution (iOME) investigated in the new study.

To prepare for the study, members of the group collected colonies of host ants from acorns, sticks, and cracks in rocks from eight different areas in eastern North America. Slavemaking ants were found in five of these eight regions. The researchers investigated how ants behave when they encounter each other, testing ants from all regions against each other. “The behavior of the hosts is solely accounted for by the origin of the slavemakers,” Foitzik summed up. When a nest of the host ants T. longispinosus is raided, for the defenders it is more important which environment the attacker comes from than their own geographical origin. Slavemaking ants from successful populations succeed in going unrecognized, thereby encountering a weaker defense. This is reflected in the activity of genes in the host ants. “The expression of genes in the defending host ants is not determined by where they themselves come from, but rather by the ecological success of the attacking parasite in its original environment,” explained Foitzik. “In effect, what happens in the ants’ brains depends on who they meet and not who they are.”

The ability of parasites from successful populations to virtually eliminate the defense of their hosts is mainly due to their success in remaining undetected. Ants recognize each other chemically using hydrocarbons that cover the external layer of their body, the cuticle. Slavemaking ants try to limit the amount of substances used for recognition they carry on their bodies. Highly successful parasite populations carry only tiny amounts of those chemicals that the host ant uses to detect them. “Thus, they are able to fly under the host’s radar,” said Professor Susanne Foitzik. “If they are successful, we see less change in the activity of the genes of the host ants.” The brood robbers can then intrude unnoticed and unhindered into a host nest.

In another study, Foitzik’s research group also investigated the activity of genes in worker ants of the species Temnothorax longispinosus. To be environmentally successful, social insects depend on division of labor, not only between queens and workers but also among the workers themselves. The role workers play, whether tending the brood or foraging for food, is influenced by their age, fertility, and nutritional status. Ants that tend the brood are younger, more fertile, and corpulent. The scientists isolated the specialized role of ants from factors related to age and fertility. “If you remove all the brood carers from a colony, some foragers become brood carers and vice versa,” explained Foitzik. The study showed that gene activity in ants depends more on their role in the colony than on their age or fertility – a new finding that helps improve our understanding of the evolution of social behavior in ants.

Significantly, major changes in ant behavior can be triggered by individual genes. One particularly important gene is Vitellogenin-like A, which is very active in brood carers. If this gene is downregulated, the workers stop caring for the colony’s offspring and spend more time caring for adult nestmates. The findings of the researchers from Mainz show that the gene Vitellogenin-like A influences the workers’ sensitivity to brood odors. If the ants no longer sense the brood, they stop caring for them. These experiments show how the division of labor in social insect societies is regulated in that group members react in different ways to specific stimuli associated with distinct tasks in the ant society.

R. Kaur et al., Ant behaviour and brain gene expression of defending hosts depend on the ecological success of the intruding social parasite, Philosophical Transactions of the Royal Society B, 374: 20180192, 11 February 2019,

Scienmag Nov 8, 2019
Credit: Illustration is courtesy of the Max Planck Society Washington, DC-- The discovery of a 13…