PHILADELPHIA – The Annenberg Public Policy Center of the University of Pennsylvania is launching a science and health knowledge monitor comprising quarterly survey reports to track national levels of health knowledge and misinformation over time. 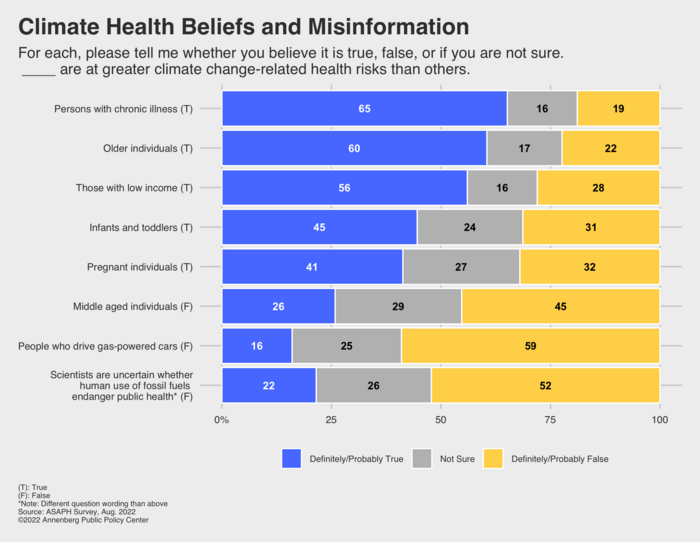 PHILADELPHIA – The Annenberg Public Policy Center of the University of Pennsylvania is launching a science and health knowledge monitor comprising quarterly survey reports to track national levels of health knowledge and misinformation over time.

Building on the Annenberg Science Knowledge (ASK) surveys which since 2016 have been focused on health knowledge and misinformation about topics such as the Zika virus, measles, and Covid-19 and vaccination against it, the policy center’s Annenberg Science and Public Health Knowledge Monitor (ASAPH) will generate quarterly indices of knowledge about such vital health topics as maternal and reproductive health, vaccination, Covid-19, monkeypox, and indications and treatment of heat-related illness. It also will provide an ongoing measure of public confidence in the National Institutes of Health (NIH), Centers for Disease Control and Prevention (CDC), and Food and Drug Administration (FDA).

Kathleen Hall Jamieson, director of the Annenberg Public Policy Center (APPC), will highlight findings from the center’s inaugural monitor in an Oct. 27, 2022, virtual keynote address at the 2022 Charles C. Shepard Science Award ceremony, hosted by the CDC in Atlanta, Georgia.

“One of the greatest challenges faced by public health authorities, scientists, and the media is increasing public knowledge about consequential issues that may affect public health,” Jamieson said. “If you don’t know that your children should be immunized against childhood diseases under the approved vaccination schedule, for example, your children could be at risk. The monitor is designed to highlight strengths and weaknesses in what the public knows and aid public health authorities in identifying misbeliefs and critical gaps in knowledge.”

APPC is debuting the report as the CDC conducts a reorganization designed to provide state and local health authorities and the public with clearer information and to bolster trust. Announcing a “strategic imperative to modernize CDC so that it consistently delivers public health information and guidance to Americans in real time,” the CDC said these changes are meant to ensure that “CDC’s science reaches the public in an understandable, accessible, and implementable manner as quickly as possible.”

The current report is based on eight waves of a nationally representative panel survey of U.S. adults, first empaneled in April 2021, that was conducted for APPC by SSRS, an independent market research company. The eighth wave of this survey was conducted August 16-22, 2022. It has a margin of sampling error (MOE) of ± 3.3 percentage points at the 95% confidence level. Some of the findings on Covid-19 and monkeypox were previously released.

Among the report’s findings:

A national effort is needed

The Annenberg ASAPH monitor’s data identify gaps in consequential knowledge in the general public as well as in demographic subgroups. They also make it possible to track knowledge, misconceptions, and confusion and determine whether existing messaging is affecting health behaviors.

“Consequential knowledge that Zika is mosquito-borne and can be sexually transmitted or that smoking during pregnancy increases the chances that a smoker’s baby will be born early or die of SIDS invites preventive or protective behavior,” Jamieson said. “Such knowledge is the first step in a pathway toward decisions that are consistent with the best available medical science.

“What these data argue for,” she added, “is a coordinated national effort to understand what the public knows about matters that affect the health of individuals, families, communities, and the nation.”

Jamieson proposed such an effort by the federal government in a presentation earlier this year to the President’s Council of Advisors on Science and Technology. In the March 2022 presentation – which can be viewed on YouTube – she suggested that the CDC, FDA, NIH, and the Office of the Surgeon General create a coordinated health knowledge monitoring, prevalence assessment, and response system.