Anesthetics may alter coloration in certain fish species, influencing the traits researchers are trying to study 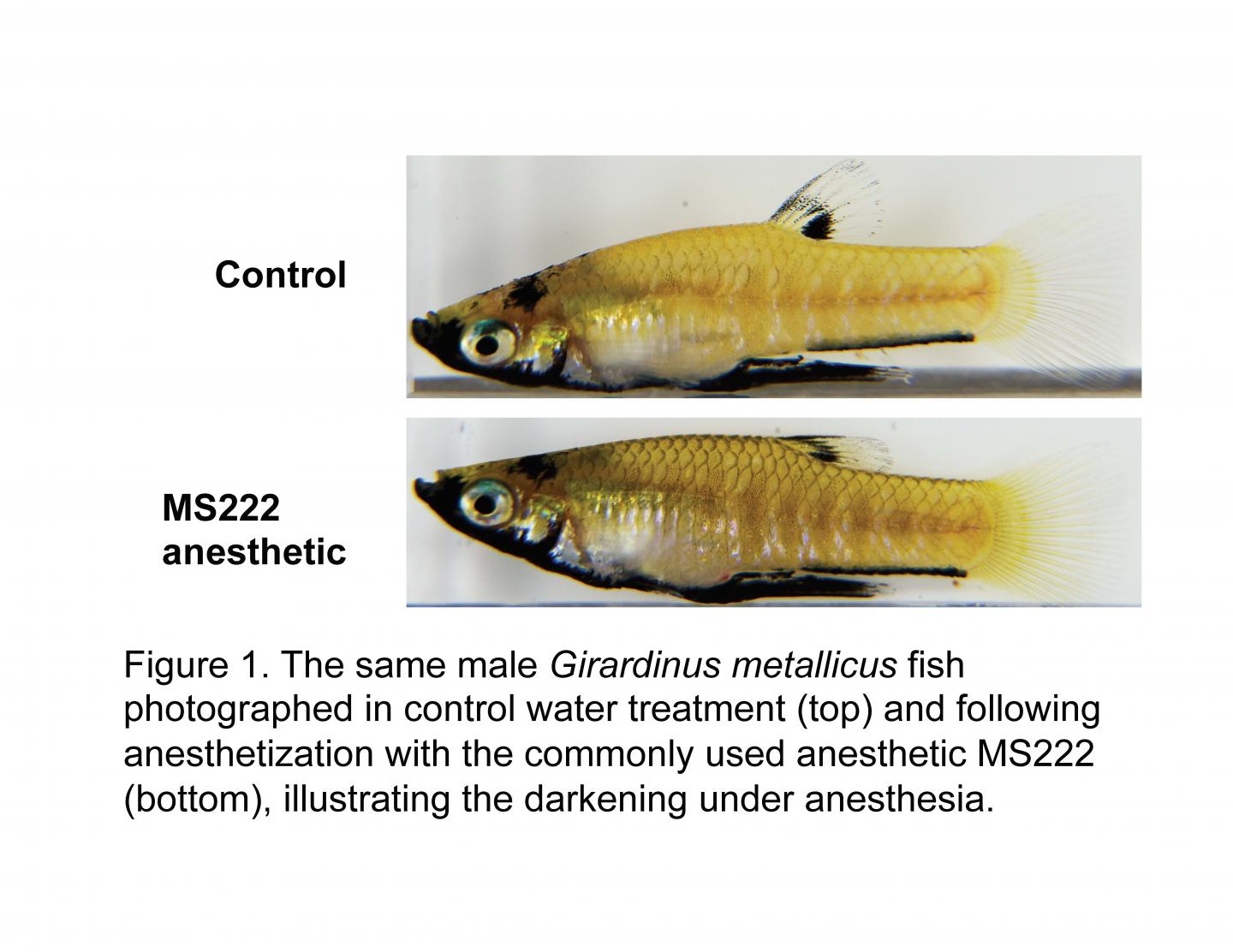 Fish use colorful patterns to signal to each other, including advertising for mates and warding off rivals. Studying these colors, especially in small and squirmy species, sometimes entails anesthetizing and photographing the fish to obtain color measurements from digital images.

Typical measurements include the hue (what we typically think of as the “color”), saturation (the intensity of the color, a function of how much gray is mixed in with it, also called “chroma”) and brightness (how much white or black is mixed in with the color). The differences among individuals may be subtle and require precise measurement. The ultimate goal for behavioral ecology studies is usually to examine the relationship between behavior and the colors as other fish see them. However, anesthetics may themselves alter coloration, influencing the very traits the researchers are trying to study.

Males of the livebearing tropical fish Girardinus metallicus are very aggressive when competing for mates. These males have yellow bodies, and males whose yellow is brighter and more saturated are more aggressive. A paper published in The Journal of Fish Biology shows that the commonly used fish anesthetics clove oil and tricaine methanesulfonate (MS222) affect color measurements obtained from digital images.

The researchers photographed the fish individually in a water-filled chamber without anesthetics, anesthetized with clove oil, and anesthetized with MS22 (in randomized order) and measured the hue, saturation and brightness of multiple body regions from digital images measured using computer software. They demonstrated that the anesthetics altered the hue (though it was always within the yellow range), increased the saturation and decreased the brightness of multiple body regions.

The results that the authors report could be important for multiple disciplines, including behavioral studies with the goals of linking coloration to behavioral variation and comparing groups of fishes to understand the impacts of coloration on evolutionary fitness, studies aimed at understanding the physiological impacts of investment into color traits, and aquaculture studies attempting to characterize the quality of stocks based on coloration traits.

The authors suggest caution when using anesthetics to immobilize fish for certain color measurements. Instead, they advocate a method already employed by some researchers: photographing these types of fish in a small, water-filled chamber under controlled light conditions and with color standards to minimize movement while obtaining results more indicative of the color likely to be seen by other fish in the wild.

Cross-technology communication in the Internet of Things significantly…