Imagine the conscious brain as a sea roiling with the collisions and dispersals of waves of different sizes and shapes, swirling around and flowing across in many different directions. Now imagine that an ocean liner lumbers through, flattening everything that trails behind with its powerful, parting wake. A new study finds that unconsciousness induced by the commonly used drug propofol has something like that metaphorical effect on higher frequency brain waves, appearing to sweep them aside and, as an apparent consequence, sweeping consciousness away as well. 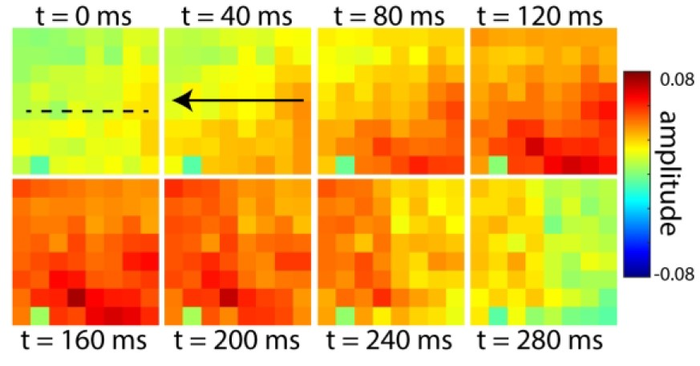 Imagine the conscious brain as a sea roiling with the collisions and dispersals of waves of different sizes and shapes, swirling around and flowing across in many different directions. Now imagine that an ocean liner lumbers through, flattening everything that trails behind with its powerful, parting wake. A new study finds that unconsciousness induced by the commonly used drug propofol has something like that metaphorical effect on higher frequency brain waves, appearing to sweep them aside and, as an apparent consequence, sweeping consciousness away as well.

Put more prosaically, the study in the Journal of Cognitive Neuroscience by MIT scientists at The Picower Institute for Learning and Memory shows that propofol substantially alters how different frequencies of brain waves travel across the brain’s surface, or cortex. Whereas conscious brains exhibit a mixture of waves of various frequencies rotating or traveling straight in various directions, brains under propofol anesthesia became dominated by powerful, very low frequency “delta” waves that roll straight outward in opposite directions instead of slowly rotating around central points as they do during consciousness. Higher frequency “beta” waves, meanwhile, became fewer and more erratically structured, traveling only in directions not dominated by the surging delta waves.

Traveling waves are hypothesized to perform many important functions as they coordinate the activity of brain cells over the areas of the brain they cover. These include reading information out from memory and holding it there while it waits to be used in cognition. They may also aid in perception and act as a means of time keeping in the brain. The findings therefore illustrate how profoundly anesthesia alters the state of the state of the brain as it induces and maintains unconsciousness, said senior author Earl K. Miller, Picower Professor of Neuroscience in MIT’s Department of Brain and Cognitive Sciences.

“The rhythms that we associate with higher cognition are drastically altered by propofol,” Miller said. “The beta traveling waves seen during wakefulness are pushed aside, redirected by delta traveling waves that have been altered and made more powerful by the anesthetic. The deltas come through like a bull in a china shop.”

Co-senior author Emery N. Brown said the findings illustrate that there are many ways anesthetic drugs can act on the brain.

“The traveling waves generated by propofol help us appreciate that there are many dynamical phenomena that anesthetics create that can contribute to altered arousal states such as unconsciousness,” said Brown, an anesthesiologist at Massachusetts General Hospital and Edward Hood Taplin Professor of Computational Neuroscience and Health Sciences and Technology at MIT. “It is unreasonable therefore, to think that there is a single mechanism of action for all anesthetics.”

Lead author Sayak Bhattacharya, a postdoctoral Picower Fellow in Miller’s lab, led the study by re-analyzing a data set recorded from two animals as they underwent propofol anesthesia, stayed in that state for a while, and then were brought back to consciousness. That’s important, Bhattacharya said, because while traveling waves have been observed in subjects under anesthesia many times, this study is among the first to track them in subjects all the way through the process of losing and regaining consciousness.

“No study has observed how traveling waves change directly from awake to anesthesia and then back to awake in the same experiment,” he said. “We continuously monitored how these waves behaved when the animals were in the awake state, and then how they changed when loss-of-consciousness occurred, and then again when recovery-of-consciousness occurred – all in the same animals, in a continuous experimental session. This allowed us to explore in real-time how neural pathways that produce the waves were altered.”

The lab’s first analysis of the data set, published in 2021, documented a profound shift toward delta waves but hadn’t measured the waves’ traveling nature.

In the new analysis, Bhattacharya and co-authors found significant shifts not only by frequency, but also wave direction, speed, structural organization and planar vs. rotational form.

After the animals regained consciousness, their wave patterns all returned to where they were before propofol administration. The clear association between these two regimes (unfettered beta before or after anesthesia vs. delta dominance during anesthesia) and the state of consciousness strongly suggests a connection, Bhattacharya said.

“We hypothesize that the drastic breakdown of beta traveling waves and their redirection could contribute to loss of consciousness under propofol anesthesia,” he said.

Notably, the study’s findings suggest an important way in which anesthesia differs from sleep (it’s a common misconception that the two states of unconsciousness are similar). In normal sleep delta waves travel in a rotating pattern that may provide the timing that induces the “spike timing dependent plasticity” needed for consolidating memories of experiences accumulated during the day. Under propofol, however, delta waves become planar rather than rotating, disrupting this memory-aiding mechanism and depriving the brain of a key function of sleep.

In addition to Bhattacharya, Miller and Brown the paper’s other authors are Jacob Donoghue, Meredith Mahnke and Scott Brincat.

The JPB Foundation, the National Institute of General Medical Sciences and the Office of Naval Research funded the research.