Living sharks are often portrayed as the apex predators of the marine realm. Paleontologists have been able to identify fossils of their extinct ancestors that date back hundreds of millions of years to a time known as the Palaeozoic period. These early “sharks,” known as acanthodians, bristled with spines. In contrast to modern sharks, they developed bony “armor” around their paired fins. 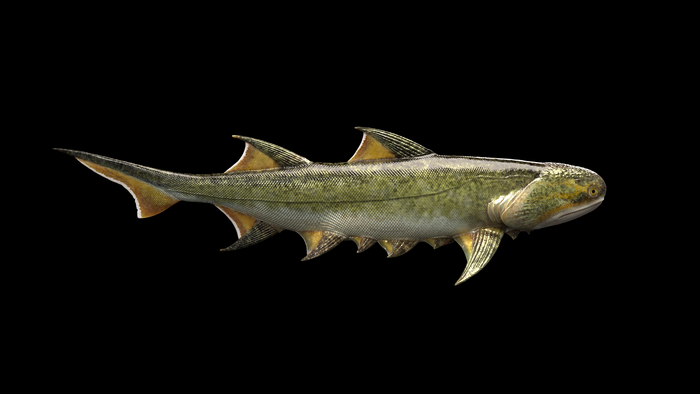 Living sharks are often portrayed as the apex predators of the marine realm. Paleontologists have been able to identify fossils of their extinct ancestors that date back hundreds of millions of years to a time known as the Palaeozoic period. These early “sharks,” known as acanthodians, bristled with spines. In contrast to modern sharks, they developed bony “armor” around their paired fins.

A recent discovery of a new species of acanthodian from China surprised scientists with its antiquity. The find predates by about 15 million years the earliest acanthodian body fossils and is the oldest undisputed jawed fish.

These findings were published in Nature on Sept. 28.

Reconstructed from thousands of tiny skeletal fragments, Fanjingshania, named after the famous UNESCO World Heritage Site Fanjingshan, is a bizarre fish with an external bony “armor” and multiple pairs of fin spines that set it apart from living jawed fish, cartilaginous sharks and rays, and bony ray- and lobe-finned fish.

Examination of Fanjingshania by a team of researchers from the Chinese Academy of Sciences, Qujing Normal University, and the University of Birmingham revealed that the species is anatomically close to groups of extinct spiny “sharks” collectively known as acanthodians. Unlike modern sharks, acanthodians have skin ossifications of the shoulder region that occur primitively in jawed fish.

The fossil remains of Fanjingshania were recovered from bone bed samples of the Rongxi Formation at a site in Shiqian County of Guizhou Province, South China.

These findings present tangible evidence of a diversification of major vertebrate groups tens of millions of years before the beginning of the so called “Age of Fishes” some 420 million years ago.

The researchers identified features that set apart Fanjingshania from any known vertebrate. It has dermal shoulder girdle plates that fuse as a unit to a number of spines—pectoral, prepectoral and prepelvic. Additionally, it was discovered that the ventral and lateral portions of the shoulder plates extend to the posterior edge of the pectoral fin spines. The species has distinct trunk scales with crowns composed of a row of tooth-like elements (odontodes) adorned by discontinuous nodose ridges. Peculiarly, dentine development is recorded in the scales but is missing in other components of the dermal skeleton such as the fin spines.

“This is the oldest jawed fish with known anatomy,” said Prof. ZHU Min from the Institute of Vertebrate Paleontology and Paleoanthropology (IVPP) of the Chinese Academy of Sciences. “The new data allowed us to place Fanjingshania in the phylogenetic tree of early vertebrates and gain much needed information about the evolutionary steps leading to the origin of important vertebrate adaptations such as jaws, sensory systems, and paired appendages.”

From the outset, it was clear to the scientists that Fanjingshania‘s shoulder girdle, with its array of fin spines, is key to pinpointing the new species’ position in the evolutionary tree of early vertebrates. They found that a group of acanthodians, known as climatiids, possess the full complement of shoulder spines recognized in Fanjingshania. What is more, in contrast to normal dermal plate development, the pectoral ossifications of Fanjingshania and the climatiids are fused to modified trunk scales. This is seen as a specialization from the primitive condition of jawed vertebrates where the bony plates grow from a single ossification center.

Unexpectedly, the fossil bones of Fanjingshania show evidence of extensive resorption and remodelling that are typically associated with skeletal development in bony fish, including humans.

“This level of hard tissue modification is unprecedented in chondrichthyans, a group that includes modern cartilaginous fish and their extinct ancestors,” said lead author Dr. Plamen Andreev, a researcher at Qujing Normal University. “It speaks about greater than currently understood developmental plasticity of the mineralized skeleton at the onset of jawed fish diversification.”

The resorption features of Fanjingshania are most apparent in isolated trunk scales that show evidence of tooth-like shedding of crown elements and removal of dermal bone from the scale base. Thin-sectioned specimens and tomography slices show that this resorptive stage was followed by deposition of replacement crown elements. Surprisingly, the closest examples of this skeletal remodelling are found in the dentition and skin teeth (denticles) of extinct and living bony fish. In Fanjingshania, however, the resorption did not target individual teeth or denticles, as occurred in bony fish, but instead removed an area that included multiple scale denticles. This peculiar replacement mechanism more closely resembles skeletal repair than the typical tooth/denticle substitution of jawed vertebrates.

A phylogenetic hypothesis for Fanjingshania that uses a numeric matrix derived from observable characters confirmed the researchers’ initial hypothesis that the species represents an early evolutionary branch of primitive chondrichthyans. These results have profound implications for our understanding of when jawed fish originated since they align with morphological clock estimates for the age of the common ancestor of cartilaginous and bony fish, dating it to around 455 million years ago, during a period known as the Ordovician.

These results tell us that the absence of undisputed remains of jawed fish of Ordovician age might be explained by under sampling of sediment sequences of comparable antiquity. They also point towards a strong preservation bias against teeth, jaws, and articulated vertebrate fossils in strata coeval with Fanjingshania.

“The new discovery puts into question existing models of vertebrate evolution by significantly condensing the timeframe for the emergence of jawed fish from their closest jawless ancestors. This will have profound impact on how we assess evolutionary rates in early vertebrates and the relationship between morphological and molecular change in these groups,” said Dr. Ivan J. Sansom from the University of Birmingham.

Spiny chondrichthyan from the lower Silurian of South China