A gold coin long dismissed as a forgery appears to be authentic and depicts a long-lost Roman emperor named Sponsian, according to a new UCL-led study. 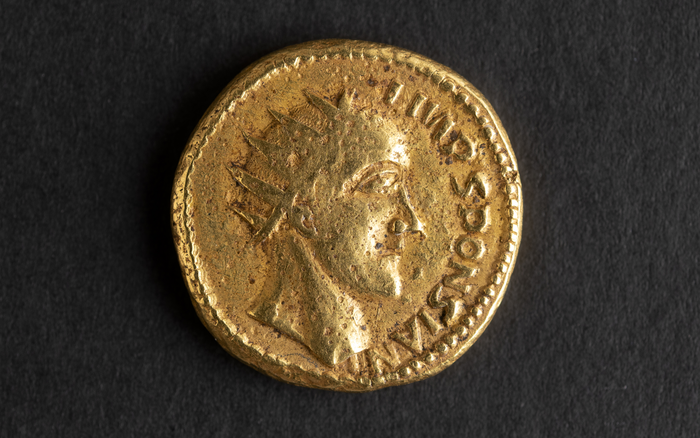 Credit: The Hunterian, University of Glasgow.

A gold coin long dismissed as a forgery appears to be authentic and depicts a long-lost Roman emperor named Sponsian, according to a new UCL-led study.

The coin, housed at The Hunterian collection at the University of Glasgow, was among a handful of coins of the same design unearthed in Transylvania, in present-day Romania, in 1713. They have been regarded as fakes since the mid-19th-century, due to their crude, strange design features and jumbled inscriptions.

In the new study, published in PLOS ONE, researchers compared the Sponsion coin with other Roman coins kept at The Hunterian, including two that are known to be genuine.

They found minerals on the coin’s surface that were consistent with it being buried in soil over a long period of time, and then exposed to air. These minerals were cemented in place by silica – cementing that would naturally occur over a long time in soil. The team also found a pattern of wear and tear that suggested the coin had been in active circulation.

Lead author Professor Paul N. Pearson (UCL Earth Sciences) said: “Scientific analysis of these ultra-rare coins rescues the emperor Sponsian from obscurity. Our evidence suggests he ruled Roman Dacia, an isolated gold mining outpost, at a time when the empire was beset by civil wars and the borderlands were overrun by plundering invaders.”

The Roman province of Dacia, a territory overlapping with modern-day Romania, was a region prized for its gold mines. Archaeological studies have established that the area was cut off from the rest of the Roman empire in around 260 CE. Surrounded by enemies, Sponsian may have been a local army officer forced to assume supreme command during a period of chaos and civil war, protecting the military and civilian population of Dacia until order was restored, and the province evacuated between 271 and 275 CE.

Coinage has always been an important symbol of power and authority. Recognising this and unable to receive official issues from the mint in Rome, Sponsian seems to have authorised the creation of locally produced coins, some featuring an image of his face, to support a functioning economy in his isolated frontier territory.

When the coins were discovered in the early 18th century, they were thought to be genuine and classed alongside other imitations of Roman coins made beyond the fringes of the empire. However, from the mid-19th century, attitudes changed. Coins from the hoard were dismissed as fakes because of the way they looked. This has been the accepted view until now.

The new study is the first time scientific analysis has been undertaken on any of the Sponsian coins. The research team used powerful microscopes in visible and ultraviolet light, as well as scanning electron microscopy and spectroscopy – studying how light at different wavelengths is absorbed or reflected – to study the coins’ surface.

Only four coins featuring Sponsian are known to have survived to the present day, all apparently originally from the 1713 hoard. Another is in Brukenthal National Museum in Sibiu, Romania. High magnification microscopic analysis performed there, following the research on the coin at The Hunterian, has revealed similar evidence of authenticity.

Curator of Numismatics at The Hunterian, Jesper Ericsson, said: “This has been a really exciting project for The Hunterian and we’re delighted that our findings have inspired collaborative research with museum colleagues in Romania. Not only do we hope that this encourages further debate about Sponsian as a historical figure, but also the investigation of coins relating to him held in other museums across Europe.”

The interim manager of the Brukenthal National Museum, Alexandru Constantin Chituță, said: “For the history of Transylvania and Romania in particular, but also for the history of Europe in general, if these results are accepted by the scientific community they will mean the addition of another important historical figure in our history.

“It is a wonderful thing for the Brukenthal National Museum, because the museum in Sibiu, Romania, is the holder of the only known coin belonging to Sponsian from the territory of Romania. I would like to express my gratitude to the colleagues from the Brukenthal Național Museum – History Museum Altemberger House and especially to the leader of the scientific team, Professor Paul N. Pearson from UCL, for their commitment, hard work and their impressive result.”

Four gold coins analysed by researchers, including the Sponsian coin and other Roman coins previously dismissed as forgeries, are on display in The Hunterian at the University of Glasgow, while the Sponsian coin in the Brukenthal National Museum is also on public display.