Deep below the ocean’s surface, the seafloor contains large quantities of naturally occurring, ice-like deposits made up of water and concentrated methane gas. For decades, climate scientists have wondered if this methane hydrate reservoir might “melt” and release massive amounts of methane to the ocean and the atmosphere as ocean temperatures warm. 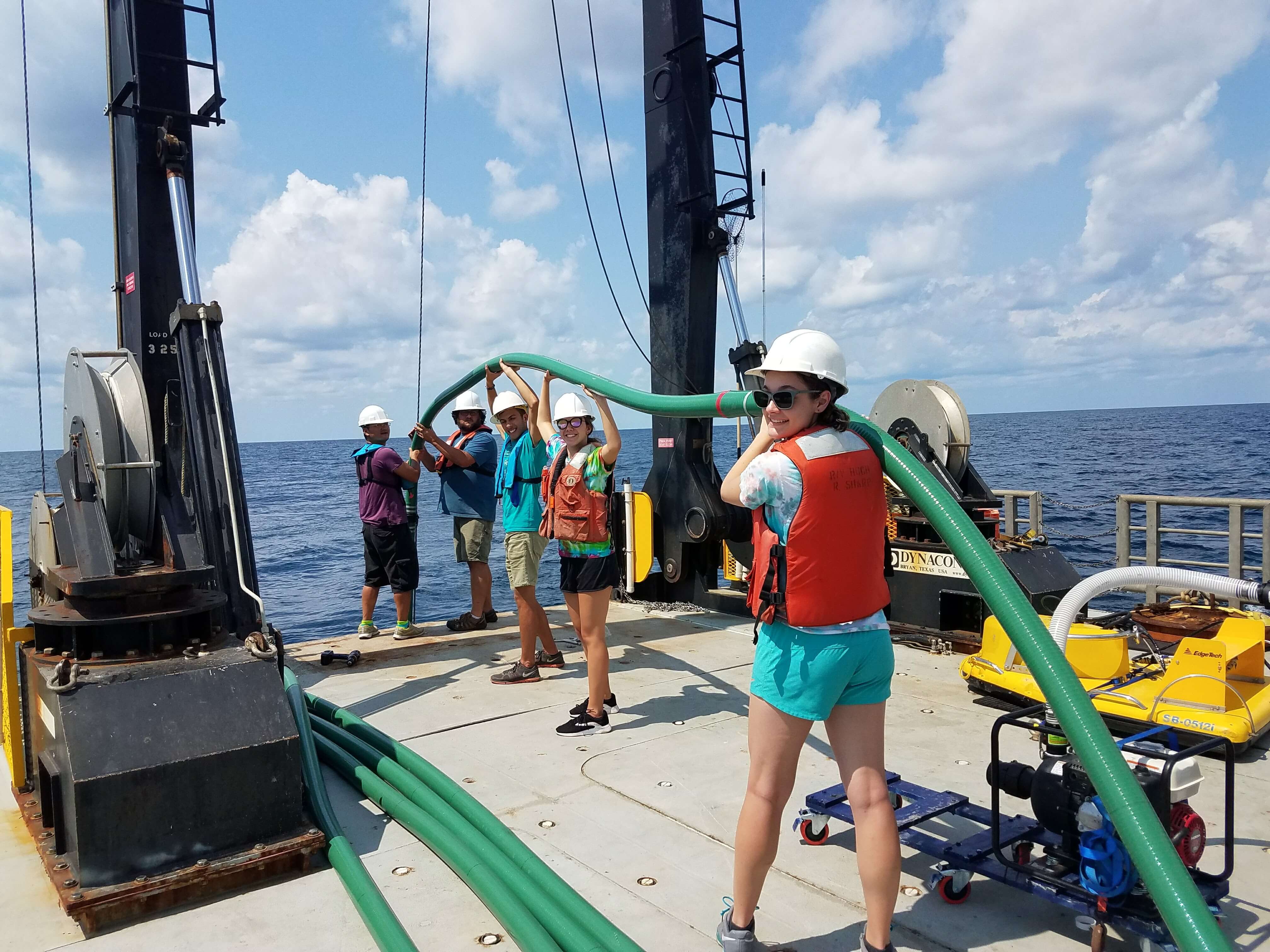 Deep below the ocean’s surface, the seafloor contains large quantities of naturally occurring, ice-like deposits made up of water and concentrated methane gas. For decades, climate scientists have wondered if this methane hydrate reservoir might “melt” and release massive amounts of methane to the ocean and the atmosphere as ocean temperatures warm.

New research from scientists at the University of Rochester, the US Geological Survey, and the University of California Irvine is the first to directly show that methane released from decomposing hydrates is not reaching the atmosphere.

While the stability of the methane hydrate reservoir is sensitive to changes in temperature, “in the mid-latitude regions where this study was conducted, we see no signatures of hydrate methane being emitted to the atmosphere,” says Joung, the first author of the study, published in Nature Geoscience.

Locked away in ice-like methane hydrates, methane has no effect on climate. But released into the atmosphere, it acts as a powerful, heat-trapping gas. Today’s atmosphere contains methane emitted from human activities—such as fossil fuel extraction and use, agriculture, and landfills—and methane emitted naturally from wetlands, wildfires, aquatic environments, and coastal zones and onshore seeps.

Ocean sediments are massive storehouses for ancient reservoirs of natural methane in the form of methane hydrates.

“The amount of methane locked up in gas hydrates globally is staggering,” Joung says.

Scientists have hypothesized that the release of even part of this reservoir could significantly exacerbate climate change.

Says Kessler: “Imagine a bubble in your fish tank going from the bottom of the tank to the top and exploding and releasing whatever was in that bubble to the air above it—that was the way many people viewed how hydrate decomposition might contribute to our warming world.”

Gas hydrates form where both methane and water meet at high-pressure and low-temperature conditions. In the parts of the ocean located in the temperate and subtropical mid-latitudes, hydrates can remain stable only at depths below about 500 meters (approximately 1640 feet) beneath the sea surface. Generally, hydrates become more stable the deeper they are beneath the sea surface.

That means the upper stability boundary for methane hydrates—500 meters—is a “sweet spot.” It is the most susceptible to melting under warming seawater temperatures, and it is the shortest distance a bubble of “previously-hydrated” methane would have to travel before reaching the atmosphere.

But even in this sweet spot, the researchers did not observe evidence of hydrate methane being emitted to the atmosphere.

To conduct their study, the researchers measured unique isotopic “signatures” of oceanic methane in samples of seawater they collected from various depths in the mid-latitude regions of both the Atlantic and Pacific oceans. This allowed them to directly identify the origin of methane in seawater.

To make even one measurement, they need an enormous amount of water—a single sample includes about two thousand gallons of seawater. The researchers used a giant suction hose to collect the samples and employed a novel technique their team developed that involves extracting methane from each sample. The researchers compressed the methane into cylinders that they then brought back to Kessler’s lab on the River Campus to prepare for analysis.

As the researchers documented, ancient methane is being released from the seafloor. However, they found negligible amounts of this ancient methane in the surface waters. They concluded, based on earlier studies, that this methane gas first dissolves in the deeper waters and then oceanic microbes biodegrade the methane, turning it into carbon dioxide before it leaves the water.

Previous work by Kessler’s group and others found that these processes are active in the mid-latitude regions and that similar processes helped to mitigate the effects of methane released during the Deepwater Horizon oil spill.

Carbon dioxide, while also a greenhouse gas, “can be incorporated into other carbon reservoirs in seawater,” says Kessler. While some of the carbon dioxide could also be emitted into the atmosphere, it would happen over much longer time scales—thousands of years—and the warming wouldn’t be as acute.

The new study builds on previous work in Kessler’s lab, focused on methane hydrates in the Arctic Ocean. Arctic waters are another sweet spot for the study of hydrates because the cold temperature means that hydrates destabilize in shallower waters, where they have a short distance to travel to reach the atmosphere.

Kessler calls these results “good news”—but news that underscores the work that remains.  “This tells us that in order to reduce sources of methane to the atmosphere, we can focus more of our attention on mitigating human emissions,” he says.