A simple two-carbon compound may have been a crucial player in the evolution of metabolism before the advent of cells, according to a new study published October 4th in the open access journal PLOS Biology, by Nick Lane and colleagues of University College London, UK. The finding potentially sheds light on the earliest stages of prebiotic biochemistry, and suggests how ATP came to be the universal energy carrier of all cellular life today. 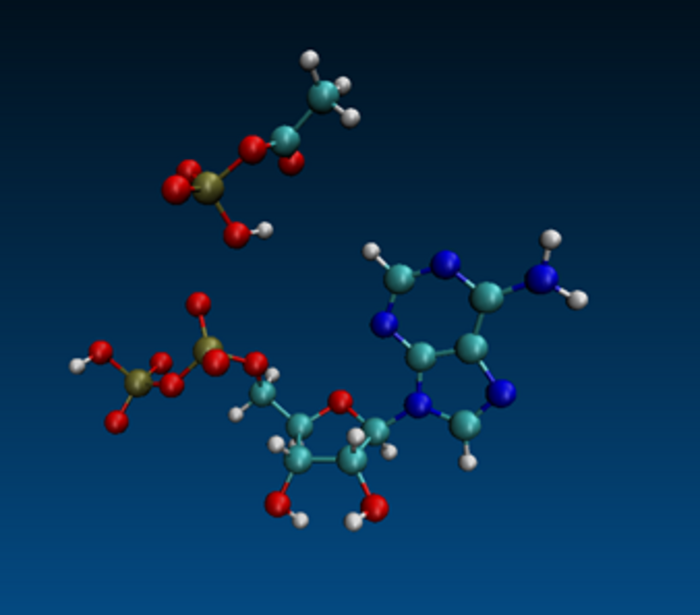 A simple two-carbon compound may have been a crucial player in the evolution of metabolism before the advent of cells, according to a new study published October 4th in the open access journal PLOS Biology, by Nick Lane and colleagues of University College London, UK. The finding potentially sheds light on the earliest stages of prebiotic biochemistry, and suggests how ATP came to be the universal energy carrier of all cellular life today.

ATP, adenosine triphosphate, is used by all cells as an energy intermediate. During cellular respiration, energy is captured when a phosphate is added to ADP (adenosine diphosphate) to generate ATP; cleavage of that phosphate releases energy to power most types of cellular functions. But building ATP’s complex chemical structure from scratch is energy intensive and requires six separate ATP-driven steps; while convincing models do allow for prebiotic formation of the ATP skeleton without energy from already-formed ATP, they also suggest ATP was likely quite scarce, and that some other compound may have played a central role in conversion of ADP to ADP at this stage of evolution.

The most likely candidate, Lane and colleagues believed, was the two-carbon compound acetyl phosphate (AcP), which functions today in both bacteria and archaea as a metabolic intermediate. AcP has been shown to phosphorylate ADP to ATP in water in the presence of iron ions, but a host of questions remained after that demonstration, including whether other small molecules might work as well, whether AcP is specific for ADP or instead could function just as well with diphosphates of other nucleosides (such as guanosine or cytosine), and whether iron is unique in its ability to catalyze ADP phosphorylation in water.

In their new study, the authors explored all these questions. Drawing on data and hypotheses about the chemical conditions of the Earth before life arose, they tested the ability of other ions and minerals to catalyze ATP formation in water; none were nearly as effective as iron. Next, they tested a panel of other small organic molecules for their ability to phosphorylate ADP; none were as effective as AcP, and only one other (carbamoyl phosphate) had any significant activity at all. Finally, they showed that none of the other nucleoside diphosphates accepted a phosphate from AcP.

Combining these results with molecular-dynamic modeling, the authors propose a mechanistic explanation for the specificity of the ADP/AcP/iron reaction, hypothesizing that the small diameter and high charge density of the iron ion, combined with the conformation of the intermediate formed when the three come together, provide a “just right” geometry that allows AcP’s phosphate to switch partners, forming ATP.

“Our results suggest that AcP is the most plausible precursor to ATP as a biological phosphorylator,” Lane says, “and that the emergence of ATP as the universal energy currency of the cell was not the result of a ‘frozen accident,’ but arose from the unique interactions of ADP and AcP. Over time, with the emergence of suitable catalysts, ATP could eventually displace AcP as a ubiquitous phosphate donor, and promote the polymerization of amino acids and nucleotides to form RNA, DNA and proteins.”

Lead author Silvana Pinna adds, “ATP is so central to metabolism that I thought it might be possible to form it from ADP under prebiotic conditions. But I also thought that several phosphorylating agents and metal ion catalysts would work, especially those conserved in life. It was very surprising to discover the reaction is so selective – in the metal ion, phosphate donor, and substrate – with molecules that life still uses. The fact that this happens best in water under mild, life-compatible conditions is really quite significant for the origin of life.”

In your coverage, please use this URL to provide access to the freely available paper in PLOS Biology: http://journals.plos.org/plosbiology/article?id=10.1371/journal.pbio.3001437

Funding: We are grateful to the Biotechnology and Biological Sciences Research Council to NL, FW and JW (BB/V003542/1; https://www.ukri.org/councils/bbsrc/) and HR (LIDo Doctoral Training Programme; https://www.lido-dtp.ac.uk/), to Gates Ventures (formerly bgc3) to NL, and to the Natural Environment Research Council to AH and NL (2236041; https://www.ukri.org/councils/nerc/). The funders had no role in study design, data collection and analysis, decision to publish, or preparation of the manuscript.